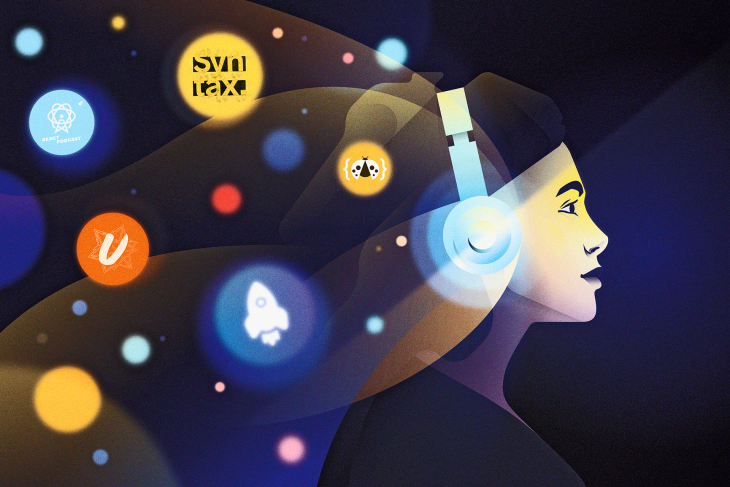 Podcasts are as popular as ever, and the last couple of years have been especially great when it comes to podcasts for web developers. Some of the biggest profiles in the development community have started sharing their voices, opinions, and dad jokes, and more are joining in every week.

The flip side of this success is that the tech podcast lists are crowded with lots of low-quality shows that are an inch away from wasting your precious listening time.

To save you a lot of trouble, I’ve concocted a list of my favorite podcasts about web development. I’ve been listening to some of these for years, and others for a few weeks – but all of them have my warmest recommendation. There’s no real ordering here, as all of them have their particularly positive aspects, so make sure to give them all a try.

So without further ado – let’s dive into the very best web development podcasts out there!

Syntax is hosted by two of the most popular teachers out there – Wes Bos and Scott Tolinsky. The podcast visits a ton of different technical topics, from TypeScript to command line tools.

The shows are either an hour or 20-ish minutes of fun discussion, experience sharing, and bad dad jokes from both sides of the mic. Since both the hosts spend most of their time creating teaching materials for web developers, their wording and delivery are perfect for both beginners and more seasoned developers.

Wes and Scott have been doing this show for over 300 episodes, and they are really good at creating a good listening experience that doesn’t drone on for hours. Instead, each episode is really well produced, and their discussions sound genuine and relatable.

The show is published twice a week, so you’ll have a ton of great listening experiences going forward.

PodRocket is hosted by a trio from LogRocket and is the newest podcast on this list (at least to me). The PodRocket show does weekly interviews with some pretty large industry profiles, and the questions seem well thought out.

One of the things I like about this podcast is how well prepared the interviewers are. They have obviously researched their guests meticulously, and get some really interesting interviews in return. It’s definitely on my weekly listen list!

React Podcast is hosted by one of the nicest people I’ve ever met – Michael Chan (also known as Chantastic). For every episode, Michael invites a guest from the React community for an hour-long discussion about whatever they’re passionate about.

Michael is a great interviewer – and gets his guests to really open up and share about both themselves and their topic of interest. It’s one of those podcasts I never miss an episode of.

The podcast honors its name, and mostly covers topics related to React, or people from the React scene. Most episodes are about an hour and feel like they’re just long enough to keep you interested the entire time. They drop about once a week, with a small break between seasons.

The Undefined Podcast is hosted by two of my personal favorites – Ken Wheeler and Jared Palmer. Its claim to fame is that it’s the only podcast with a two drink minimum – a strategy that gets some really cool discussions going.

If you haven’t heard of Ken or Jared before, they are Twitter famous developers with a very special brand of swearing, barbecuing, and oversharing. I’m not saying they’re the bad boys of the tech podcasts, but they probably would say that.

Their podcast is mostly entertaining anecdotes and personal stories, but they invite some of the most relevant people in the business for some actual tech talk, too. It’s a very approachable show and is always fun to listen in on.

The Undefined podcast doesn’t really have a solid schedule, but they come together every month or so on average. I always make sure to listen to them whenever they release a new episode – and you should too.

Chats with Kent is hosted by the one and only Kent C. Dodds. For those who don’t know Kent, he’s a wonderful developer, talented teacher, and incredible writer that gives most of his knowledge away for free.

Chats with Kent is a series of one-on-one discussions with some of the biggest names in web development about modern technologies, career development, and everything in between. Kent is a great interviewer and makes his guests (at least sound like they) feel at ease.

This podcast goes all Netflix and drops entire seasons at once, so get ready for some good ol’ binging. Kent just released the third season, but if you’re new to this podcast, make sure you check out older episodes as well. It’s all very entertaining.

The Ladybug Podcast is the only podcast of this list hosted exclusively by women – and four extremely talented ones at that.

Emma, Ali, Kelly, and Sidney don’t have a ton of guests, but they do have a ton of interesting topics. On their fifth season already, this weekly podcast touches on both technical subjects, as well as more general topics like coding boot camps, how to be a consultant, and creating digital content.

I’ve enjoyed every episode I’ve ever heard from this gang, and I bet you would too. Give it a shot!

Career Chats is – as you might have guessed – mostly about developer careers and how to advance yours. Hosted by Swyx and Randall, this show “hyper focuses” on a single thing that might advance your career.

The hyperfocus is a good idea because the episodes are short and impactful – about 10 minutes apiece. Personally, I love this format, as I can jam in a few episodes whenever I have 10 minutes to spare.

The show just finished their first season, but I hope they come back for more. I’ve gotten a ton of great tips that have shaped my career as well. My favorite takeaway is Swyx’s famous mantra of learning in public.

The Full Stack Radio show is a really interesting one. The host – Adam Wathan – is also the creator of the very popular Tailwind CSS library, and he has a great time interviewing tons of interesting profiles within the web development community.

Each episode typically focuses on a particular guest and what they’re interested in, and Adam does a great job interviewing them. He combines his skill as a great listener with insightful responses, which makes for great discussions and really well-produced episodes.

I was only introduced to this podcast a short time ago, but it’s definitely one of my favorites. The episodes typically run an hour, but that time flies by real quick. A must-have on your to-listen list.

Developer Tea is one of the most seasoned podcasts out there, with over 6 years and 600 episodes to show for. It’s hosted by Jonathan Cutrell, and it’s pretty different from most tech podcasts.

Whereas many podcasts within the web developer sphere deal with the technical details and stories behind it, the Developer Tea podcast dives into deeper territory. When talking about exceptions, Jonathan introduces the idea of exceptions in life, and how you deal with them.

I have to admit, I was pretty skeptical after hearing the first few episodes of this show, but this novel perspective on tech turned out to be really valuable to me.

So dive in, give it a shot, and honor this granddad of tech podcast with an open mind.

HTTP 203 is the last podcast on this list, but it’s definitely one of the top on my podcast backlog. This podcast is hosted by the one and only Jake Archibald, as well as Surma.

This show is a perfect mix of everyday topics like bedtime routines and pretty technical stuff like WASM and call stacks. This combination makes it perfect for listening to when you need some downtime, but still want to sound like you learned something today.

They mostly keep it a two-person show, but they do the occasional interview as well. They did a bunch of interesting ones at this year’s Google I/O conference, which I thoroughly enjoyed.

So this is it – my most recommended podcasts for web developers. Some focus on the tech, some on careers, and others on the web developer community in general. If you give at least some of them a shot, I’m certain you’ll learn, be inspired, and entertained.

With all this said – I would love to hear about your favorites in the comments! What are your favorite podcasts, and what makes them special to you?

Build a React dashboard with Tremor