Emmanuel Oaikhenan Follow I started coding JavaScript in 2017 and delved into DevOps in 2019. Since then, I've worked on projects that exposed me to learning more about software development and gained the requisite soft skills for communicating with teammates and clients. 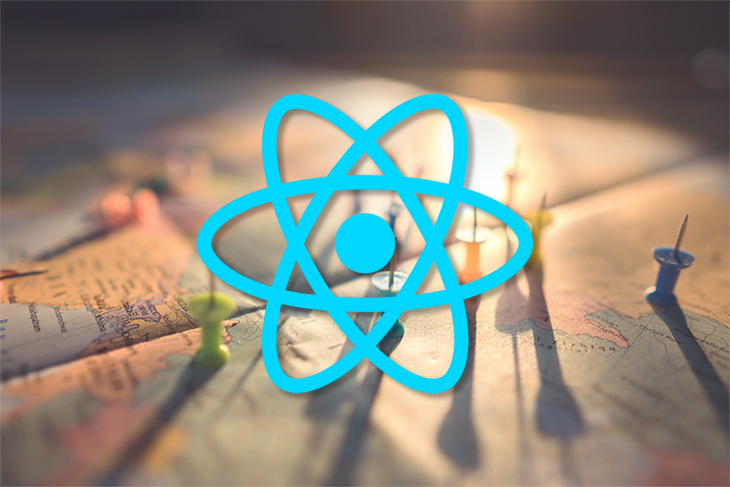 Ever wondered how delivery and ride-hailing apps know where you are at a given point in time? The answer is geolocation.

In this tutorial, we’ll show you how to implement geolocation in React Native. We’ll build an example app in React Native that displays the user’s location on a map in longitude and latitude coordinates and enables the user to send their location to another source, such as Twitter.

Geolocation is the ability to deduce the geographic position of a device that is connected to the internet. Most often, the user must grant permission for an app to access their location data.

One simple example of geolocation is using a device’s IP address to determine the country, city, or postal code at which it is located.

In this React Native geolocation tutorial, we’ll use the react-native-location library. It is available as a Node package and thus available on npm.

We’ll build an app that does the following:

Note you can use nvm to manage multiple node versions installed on your machine.

React Native has a built-in command-line interface that you can use to generate a new project. You can access it without installing anything globally using npx, which ships with Node.js.

To begin our project, run the following command in the terminal:

The init part of the command is the instruction to initialize a new React Native project with ReactNativeLocation as the directory where the project files will be installed.

You can then check React Native is installed using:

This prints the React Native version installed on your machine to the console.

Open up your favorite IDE and go to the ReactNativeGeolocation directory. The command we ran to initialize the project set up the React Native app for us.

We’ll write all our code in the App.js file. Make sure you’re in the root directory of your app to run the commands.

The first step is to start Metro. Metro is a JavaScript bundler that ships with React Native. Metro “takes in an entry file and various options, and returns a single JavaScript file that includes all your code and its dependencies.”

With Metro running in a terminal, open another terminal and run:

Have an Android emulator running or a mobile device connected to your PC in debug mode to run the app on your mobile device. You should then see the following screen: 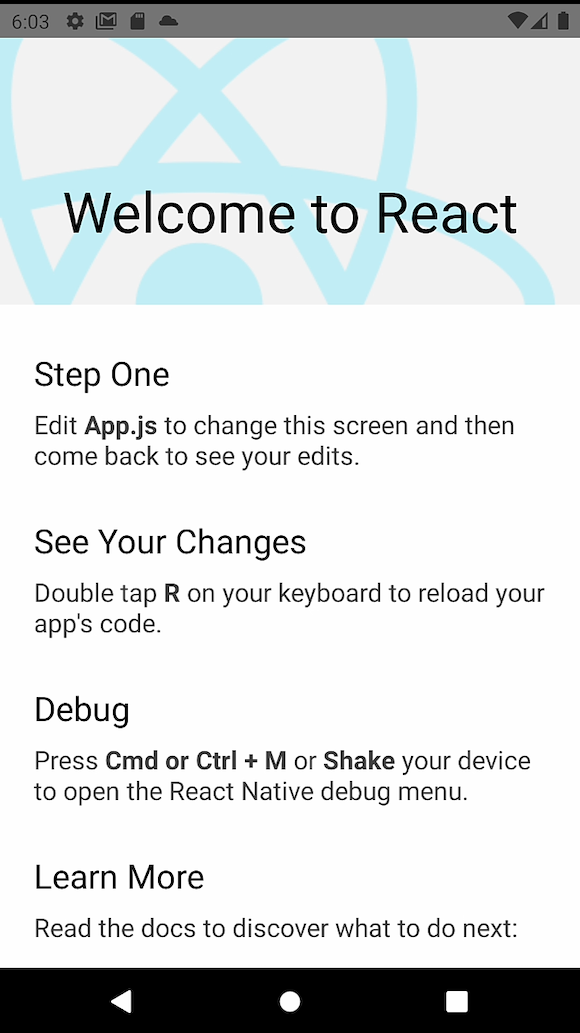 Now we can go on to App.js and start making changes to the app.

Remove all the old code in App.js and replace it with this:

This gives us a new screen where we continue writing our program. 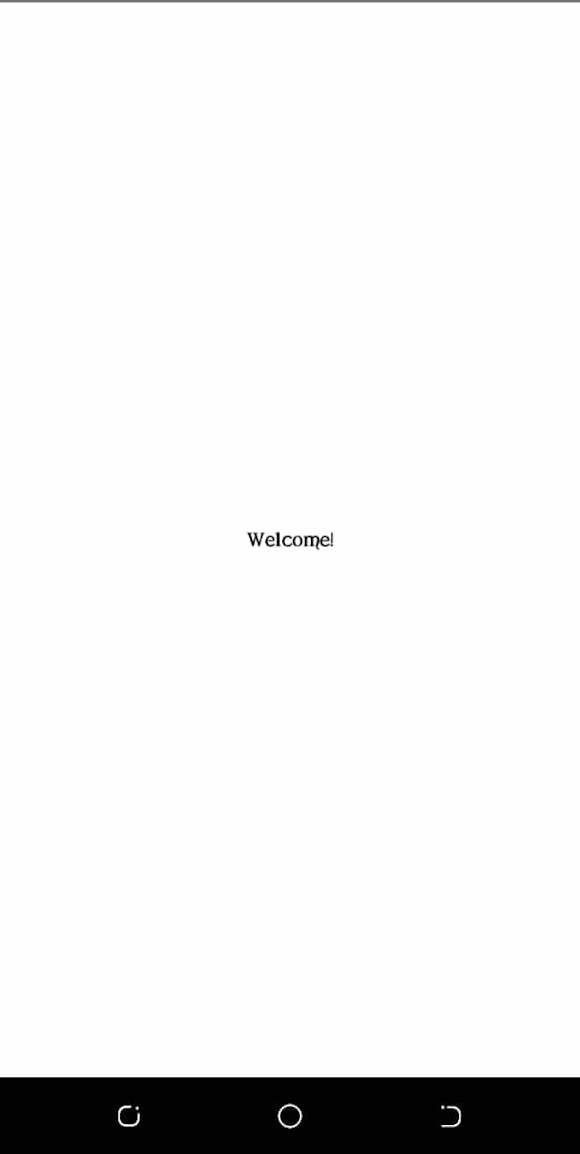 Install the library using either Yarn:

You can link the library using Cocoapods by adding this line to your podfile:

You then need to make sure you have the correct usage descriptions inside your Info.plist file. The message will show in the alert box when your app requests permissions and lets the user know why you are asking for that permission. They are also part of the app store review process.

The easiest way to add these is to find your Info.plist. Open your favorite IDE and find the file in your project source directory. You can then enter the following items into the file:

If you want to access fine location, you should also include:

The next step is to install the Google Fused Location provider dependency, which is optional. The library provides two methods of getting the location on Android. The default is the built-in location manager. However, you can optionally choose to install the Fused Location library, which provides more accurate and faster results. The downside is that it will only work on devices with Google Play Services installed and configured (which is most Android devices in the west, but not Kindle devices or Asian markets).

If you would like to use the Google Play Services Fused Location provider, you need to add these dependencies to your android/app/build.gradle file:

Principally, we’ll get permission from the user to access their location. We’ll then get the user’s coordinates and send these coordinates.

Add two buttons to App.js under the welcome text: 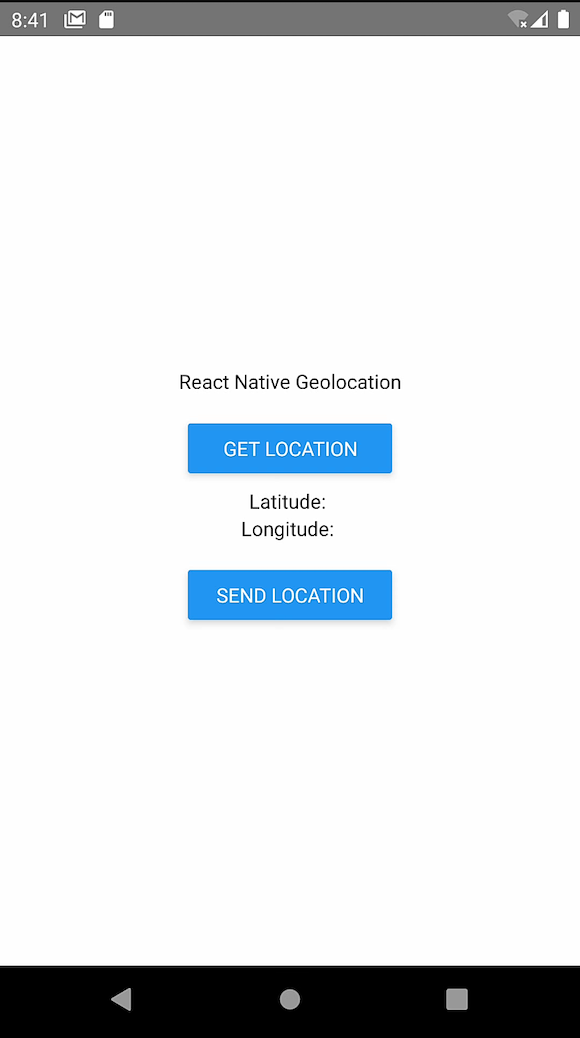 Once we have the react-native-location library installed, we can implement the logic to get the latitude and longitude coordinates. Using ES6, we’ll write an async request that will be handled by the event on the button: onPress, which is triggered by the “GET LOCATION” button.

Once this event handler is triggered, the user is asked for permission to access their location, upon granting the request, the location will be returned to the user.

First, import react-native-library and call the configure method on it:

This method takes the one object, distanceFilter. The distanceFilter is the minimum distance in meters that a device location will change before the new location update callback in the sample app is called. It is set to null so as to change whenever you move your device.

Update the “GET LOCATION” button as follows: 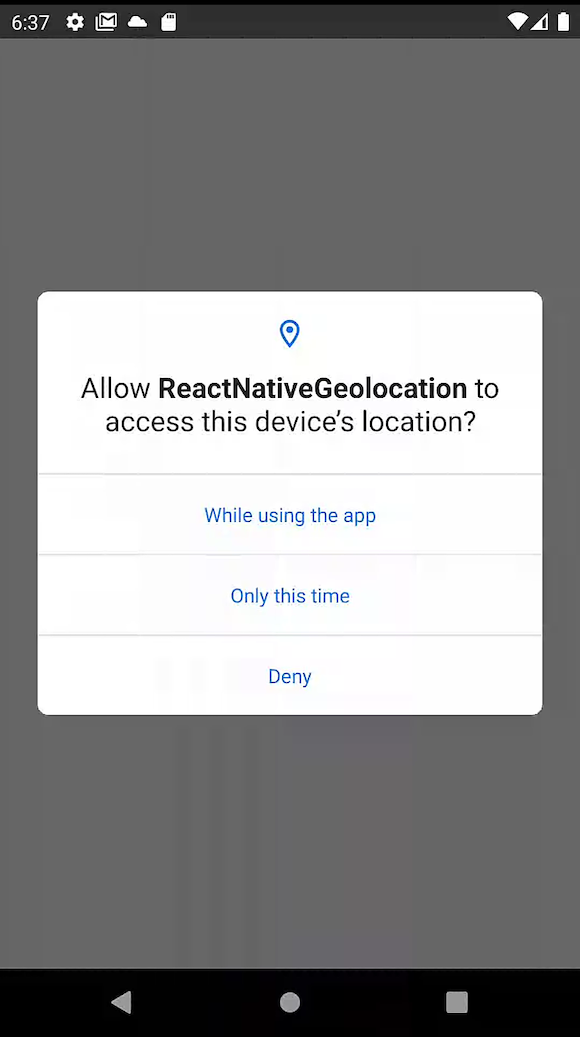 Here is the screen when the user clicks the button again after denying permission: 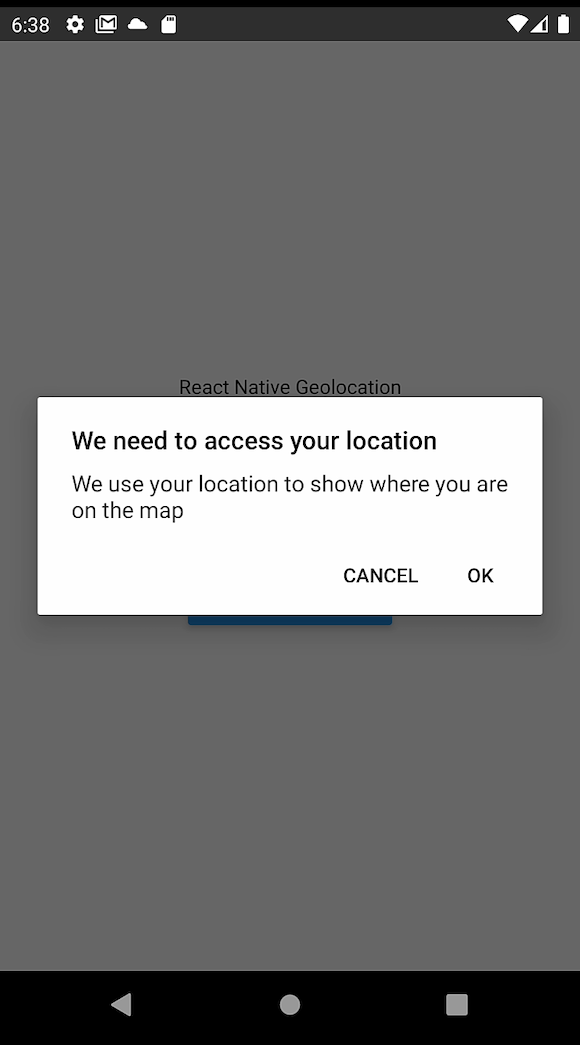 Getting the user’s location data

When the user then grants permission, we have to update the code to get the user’s location:

Let’s break down the code:

The location object is logged to the console with the following example information in JSON format:

What we need from the object response is the latitude and longitude, which we then log to the console as well.

There, we can get the user’s location.

To send the user’s goelocation data to Twitter, we need to simply turn the “SEND LOCATION” button into a “Tweet” button.

Before we send the location to the User, it is fair to display the data returned in the example. To do this we add the useState Hook from React to our app:

Then we define a state inside our App function:

We update the if statement to call the isViewLocation method and update the viewLocation array with the Location information object returned:

To view the information returned, update the Location and Longitude text tags:

viewLocation.latitude returns the latitude in the object response called by the method isViewLocation. Same goes for the longitude.

At this point, we can update the button to send the user’s location to Twitter.

Here’s a view of our final example app: 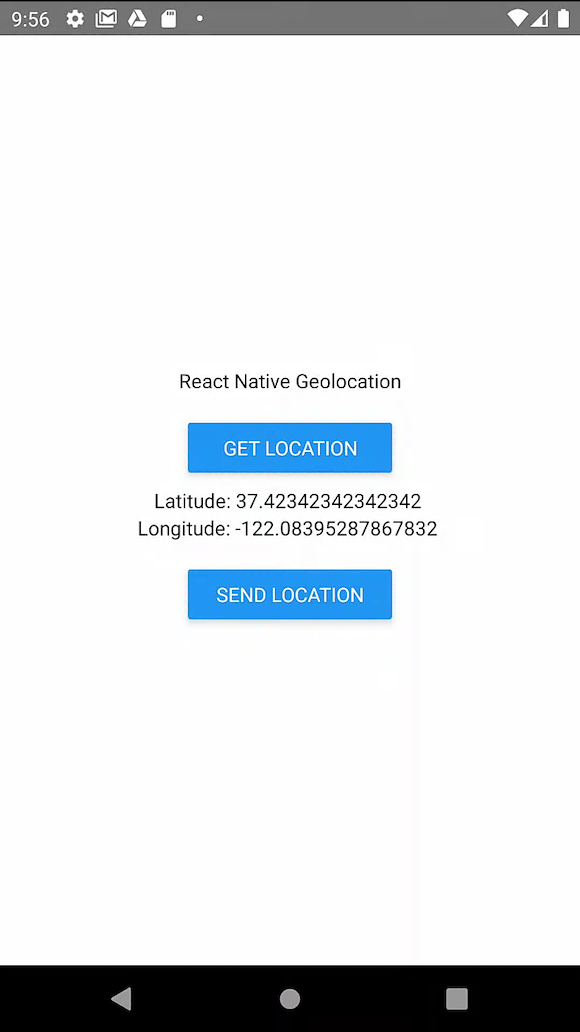 We have to initialize a state that takes the location when it is returned and set it to a content to be tweeted:

The “SEND LOCATION” button will take an event handler that will trigger a function call.

We can go ahead and write the function:

The function is a simple script that sets an empty array, twitterParams. The conditional if statement is parsed in a try catch block, in which the console logs an error if any in the catch block. The conditional if pushes a tweet to the twitterParams empty array and, using the React Native Linking component, opens up the URL with the openURL method.

There’s a lot more you can do now that you know how to acquire a user’s location. You can build a delivery service, track a user, and even build an emergency button alert system. The possibilities are endless!

You can access the full source code for this project on GitHub.

Emmanuel Oaikhenan Follow I started coding JavaScript in 2017 and delved into DevOps in 2019. Since then, I've worked on projects that exposed me to learning more about software development and gained the requisite soft skills for communicating with teammates and clients.
« React vs. web components
React Hooks cheat sheet: Best practices with examples »