Anvith Bhat Follow I'm passionate about creating stuff around Android. Be wary, observations may be interlaced with humor.

A guide to R8 and code shrinking in Android 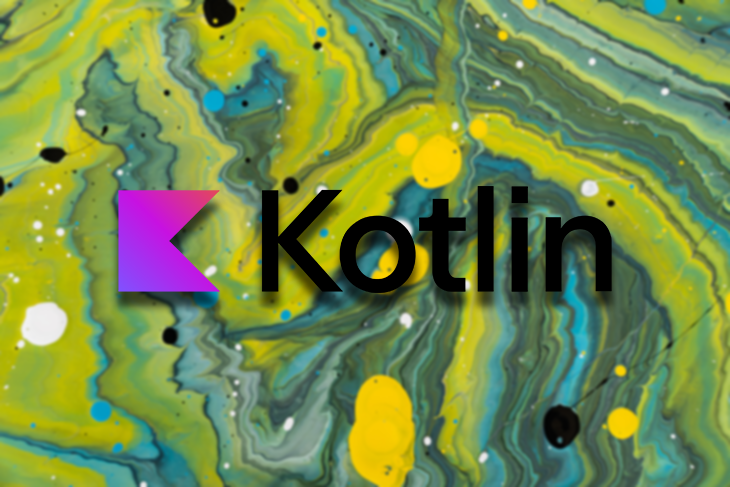 Code shrinking is an approach that allows us to generate smaller APKs by removing unused code or refactoring existing code, resulting in a smaller footprint. In addition to shrinking, obfuscating is another tactic that allows us to guard our Android apps against reverse engineering.

Using both of these strategies will ensure that your app is faster to download and more difficult to modify by others.

In the early versions of Android, code shrinking and optimization were delegated to a tool called Proguard. However, since Android Gradle Plugin (AGP) v 3.4.0, Android has used the R8 compiler.

While both tools help with code compaction, R8 has richer functionality than code shrinking. For starters, R8 has limited support for Kotlin, whereas Proguard was built for Java toolchains. R8 achieves better inlining and outlining (extracting common code into a function) than Proguard, whereas the latter is better at propagating constant arguments.

Speaking of the actual code compaction process, R8 performs better by achieving 10 percent compaction, as opposed to 8.5 percent for Proguard.

The R8 compiler does various things to reduce the size of your final APK. Some of these include:

Once all of the above steps are completed, R8 converts the bytecode into dexcode by a process called dexing. Earlier, this was a part of D8 compiler, but has now been integrated into the R8 compiler.

Now that we know a bit about the R8 compiler, let’s see how code shrinking actually works.

In Android, we can configure code shrinking by setting the minifyEnabled flag as true in your build.gradle file. Optionally, you may also enable shrinkResourcesto remove unneeded resources.

Code shrinking starts by examining what are called entry points. Entry points are declared in a config file and made available via the proguardFiles parameter in the build.gradle.

Once R8 has a set of entry points, it begins searching for all classes and entities that are reachable from these entry points. It proceeds to build a list of such tokens. Any token that isn’t reachable is stripped from the final output.

This process is generally not foolproof because:

Many of these entry points are defined in the proguard-android-optimize.txt file made available via the AGP plugin. Here’s a partial snapshot of what it looks like:

Let’s go over what the two rules above mean:

Next, let’s get to know the schema that powers R8.

Though we’ll be discussing these as Proguard rules, they are the same rules that configure R8 as well. Let’s take deeper dive into how to write them.

A typical R8 or Proguard rule consists of three sections:

This is because our first wildcard matcher, *, matches Task and Storage, which we can reuse to define the dynamic parts of our function’s name.

Writing your own R8 rules

The R8 or Proguard rules shipped via AGP are generally sufficient, however, a need may arise to write your own rules. While writing R8 rules, we should strive to avoid including more than what’s needed in our keep rules to ensure that we can compress most of our code. Also, all classes we specify need to be fully qualified, i.e., they must include the package name.

Typically, enums used in XML files are the culprits stripped away by R8. But we can define our own rule to keep them, as follows:

Note: The {*;} in the braces implies that we intend to preserve all members of the class/enum.

Another rule is to preserve class constructors; here’s how you’d do it using the keyword init:

Occasionally, there may be entities included in your app that are reflectively looked up via their fully qualified name within jars. You’d want to preserve only the names and prevent R8 from obfuscating or renaming the class. You can retain names by using the keepnames qualifier:

Another way to retain classes is to annotate them with the @Keep annotation. These classes are retained via the androidx.annotation library Proguard rule. However, you can only use this on source code you control; additionally, this is a more generic solution and will result in the inclusion of members that aren’t used.

Resource shrinking is typically done after code shrinking, but instead of using Proguard rules, we can specify resource retention using a keep.xml in our res/raw folder. We generally do not need this unless we are looking for resources via Resources.getIdentifier().

In such cases, the resource shrinker behaves conservatively. Below is an example:

The shrinker uses pattern matching and retains all assets, starting with ic_. We can also retain some assets explicitly in our keep.xml, as follows:

Note: The discard option ensures the wip is removed from the final build if unused.

Occasionally while using R8, you’ll end up with a missing resource error in the form of ClassNotFoundException or FieldNotFoundException. However, since the trace is obfuscated, we’ll need to use a tool called retrace.

Retrace is usually present on the following path: Android/sdk/tools/proguard/bin. You may optionally use the GUI-based route by using the proguardgui.sh command, as shown below: 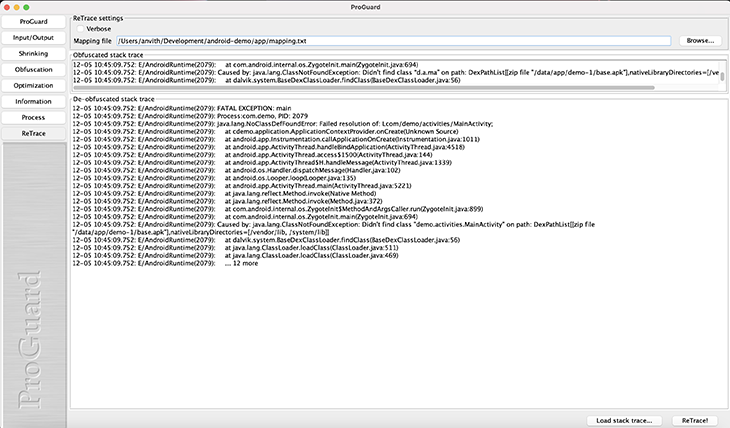 Once you’ve figured out which class or member is causing this issue, you can easily fix this by including a specific keep rule for it:

R8 generally strips meta properties like line numbers and source file names. We can retain this information by using keepattributes, as shown in the below rule:

You can find the complete list of attributes here.

Occasionally, you may see that a member that was supposed to be removed from the final APK has not actually been removed. We can figure out why by using whyareyoukeeping:

This will print the below output:

Another useful tool while debugging is to list all the unused classes. This can be done using printusage, as follows:

Lastly, if you wish to see classes matched by your rules, you may use the following command to observe the matched results:

We can instruct R8 to be more aggressive by letting it run in non-compat mode and declaring the following property in the gradle.properties file:

This flag results in some of the more rigorous optimizations, like:

Similar to the code shrinking option, there is an aggressive resource shrink mode that can be added to the keep.xml:

In this article, we learned about R8 and how to configure rules for it. In the process, we also covered various debugging options to address the perils of aggressive shrinking.

I hope you’ve found the information in this article useful for addressing your code shrinking concerns and are ready to leverage the R8 toolchain!

Anvith Bhat Follow I'm passionate about creating stuff around Android. Be wary, observations may be interlaced with humor.
« How to create a double border in CSS
Understanding sunk costs in product management »