How to keep your JavaScript libraries up to date 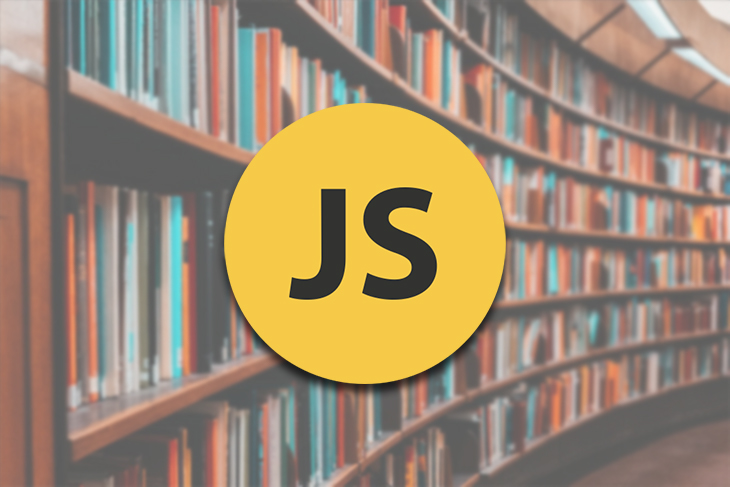 The job of keeping JavaScript libraries up to date can be more nuanced than just running npm update or yarn up once in a while. New projects usually start with the latest versions of libraries, but they can become out of date fairly quickly.

Why so many dependencies?

There are a few reasons for this trend. The first is that the JS ecosystem is very much tied to Node.js and the npm registry. This is important because Node.js has an intentionally small standard library. Just compare it to Python’s standard library.

There are pros and cons to this approach, but the practical result is that JS developers have a habit of turning to third-party libraries to solve problems, even for tasks like adding mkdir -p functionality. The mkdirp library is downloaded over 20 million times per week.

Since dependencies can have dependencies themselves, this habit can lead to a large node_modules directory. Its size has become a meme, and it is common for npm’s package-lock.json and Yarn’s yarn.lock to be thousands or even tens of thousands of lines long. 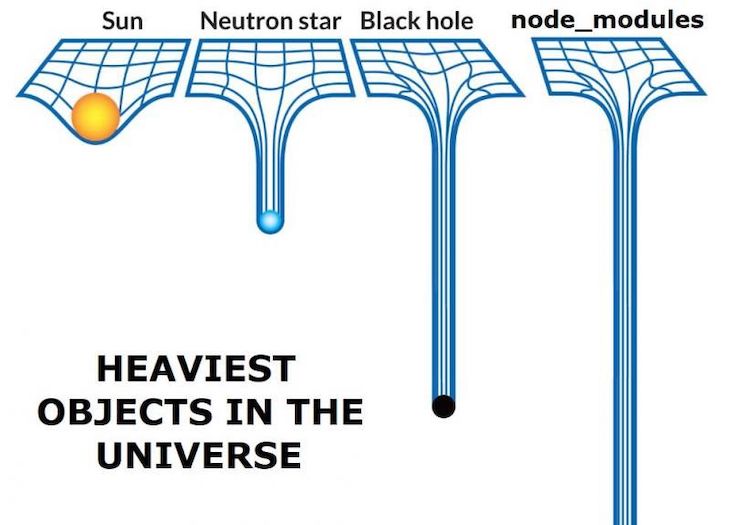 To a greater degree than in other ecosystems, JS developers also embrace the philosophy of creating and using small and focused dependencies. This is sometimes a target of criticism, especially when packages only contain one line of code.

Regardless of the trade-offs of this reality, developers will need to consider their dependency update strategy at some point.

You might ask why it’s worth keeping dependencies up to date in the first place, especially when a project is working fine as is.

The first reason is to prevent security vulnerabilities. Even if you are capable of writing perfect code, any third-party code you use, directly or indirectly, can have security issues. This can lead to devastating consequences. The 2017 Equifax data breach was caused by Equifax failing to update a framework that it used for one of its websites after the framework patched a security vulnerability.

The same idea applies to other bug fixes, functionality improvements, and performance improvements. By updating your dependencies, you can easily bring these improvements into your project.

The second reason is to avoid having to make huge changes later when you are forced to upgrade for whatever reason. For example, you might start off with version 1.0 of a library. You don’t upgrade for a long time, and then you try to upgrade directly to version 4.0. This could involve significant changes that could have been less painful if you had upgraded to 2.0 and 3.0 in between.

This isn’t that rare of a situation. Maybe you want to upgrade to a new major version of Node, but the current version of one of your libraries doesn’t support it.

Similarly, maybe your libraries depend on each other in a way that makes it difficult to update one without also updating another. For example, you might use a React component library that has a peer dependency on React. You only want to update the component library, but then you find yourself being forced to update React as well.

This cascading effect can result in a much larger change than you originally intended to make, especially if you must change some of your own code as a result. The longer you go without updating your libraries, the more likely you’ll run into this situation.

Some library authors try to ease migrations by introducing breaking changes in a thoughtful way, such as deprecating features before removing them. If you rarely update, you might end up being forced to make big changes at an inconvenient time rather than having an early warning and the chance to make a plan.

Updating dependencies is also a way to stay informed. It gives you a sense of how the development of a library is going. You might learn of a new feature that would be helpful to you. Or you might realize that a library is changing in such a way that it won’t meet your needs in the future, and you should start investigating alternatives. It’s easy to miss things like these if you install a library and never think about it again.

Lastly, if you are a library author yourself, it makes sense to update your dependencies on behalf of your end users. They cannot easily control the versions of sub-dependencies, so if there is an issue with one, they may be stuck with the issue if you don’t update your package.json to allow them to bring in a newer version of the sub-dependency.

Why not to update

However, there are also reasons not to update libraries. The biggest one is that any change carries a risk of causing a problem. While you may get a fix for a bug that you aren’t even aware of, it’s also possible that the updated library introduces a new bug or performance regression.

One school of thought is that you should only update dependencies when you have a specific reason instead of updating just for the sake of updating. Having a good test suite helps to mitigate the risk, but it’s still a risk.

Updating dependencies also takes time away from building new features or fixing known issues. It’s a chore that can take an unexpectedly long amount of time when a library changes significantly.

Regardless of how often you decide to keep libraries up to date, let’s consider the actual mechanisms for doing so.

JS libraries tend to follow semantic versioning, but version numbers merely reflect the author’s intent and understanding. They could publish a new minor version that actually does have a breaking change by accident, or maybe you are using the library in an unexpected way that causes an issue with the updated version.

By default, npm and Yarn expect libraries to follow semantic versioning. When you add a library with either, the entry in package.json will have a caret (^)in front of the version:

To check if your dependencies are out of date, you can run npm outdated:

When you’re updating, the most important thing to do is to read the library’s changelog. This is usually the most efficient way to figure out what changes you are bringing in, with the most crucial ones being breaking changes.

If you find yourself in the unfortunate situation of updating a library that doesn’t have a changelog but is open-source, you may have to go through the commit history to figure out what has changed. Larger projects also tend to have blogs that provide more details for new versions.

The standard method of updating packages is to use npm update, which updates all packages to the latest version that is OK according to semver. In this case, you will update Lodash to version 3.10.1.

Even though version 4.17.15 is available, you won’t be updated to it by default because the caret limits you to minor and patch updates. You can also pass specific packages to the command if you don’t want to update all packages at once.

In many cases, you’ll want to update to the latest available version, regardless of the specified semver. Unfortunately, npm update doesn’t have a way to do this, so you’ll need to use npm install [email protected].

To make this process more efficient, especially when you have many dependencies, consider using npm-check or npm-check-updates. These CLI tools let you do updates in an interactive manner and provide helpful info like a link to the project’s website so you can easily inspect changes.

Yarn even has this feature built in. Just run yarn upgrade-interactive.

Yarn doesn’t have an outdated command, so upgrade-interactive basically combines npm’s outdated and update into one, though you can also use yarn up.

Note that there are some differences if you are still using Yarn v1. The upgrade command is yarn upgrade instead of yarn up. Yarn v1 also does have an outdated command.

There has also been a push to streamline the update process with external services. Some tools for this purpose include Gemnasium, Greenkeeper, and Dependabot, though they have been acquired or subsumed by GitLab, Snyk, and GitHub, respectively.

The general idea is to have a service that monitors your project’s dependencies and even opens pull requests to update them. They can also alert you when security vulnerabilities are found in your dependency tree. Here is a screenshot of a Dependabot PR that is generated by GitHub’s security updates. 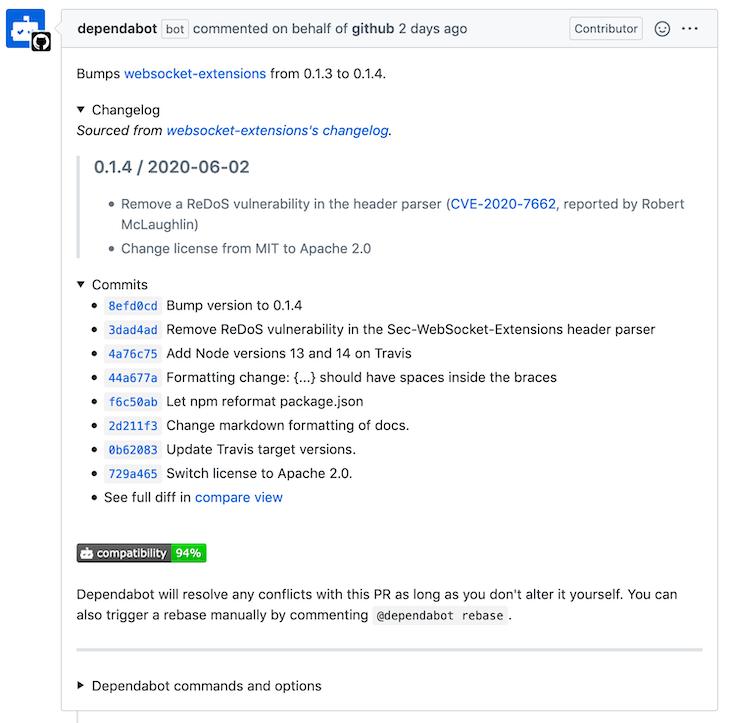 Services like these can make it considerably easier to keep your libraries up to date since you don’t have to remember to do so yourself.

Keeping libraries up to date might seem straightforward on the surface, but it’s good to put some thought into your update strategy on a per-project basis. One project may never need to be updated again, while another one may call for using Dependabot, Snyk, or another service to aggressively stay up to date. Or maybe you are fine with a just-in time-approach where you update dependencies as you discover issues. In any case, make your decision an explicit one.

Danny Guo Follow Hacking away on sublimefund.org.
« Using Redis in a Rust web service
Creating beautiful tooltips with only CSS »