Paul Akinyemi Follow I'm a fullstack web developer and technical writer with experience in JavaScript and Python. I love bringing pretty and complex user interfaces to life with clean and efficient code.

How to build a Gantt Chart in JavaScript with Frappe Gantt 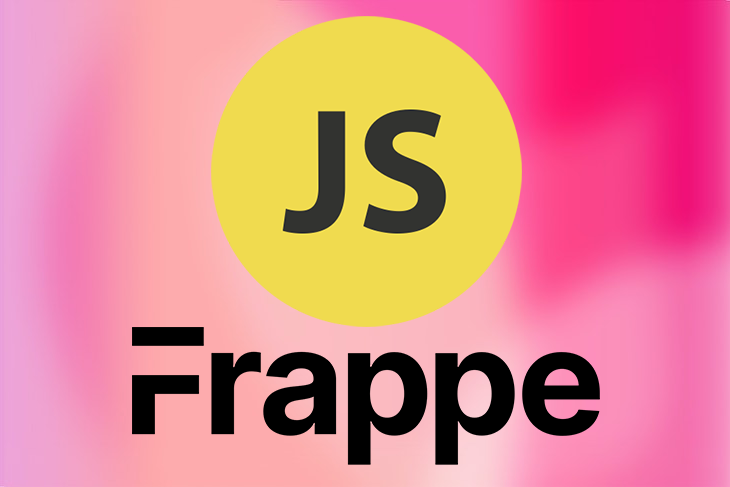 A Gantt chart is a popular and invaluable project management tool that has been in use since the 1900s. A Gantt chart is a specialized type of bar chart that is used to visualize the timeline of a project by representing each of the tasks comprising the project as a horizontal bar, the length of which is proportional to the allotted time for that task.

A Gantt chart also shows the relationships between the tasks in a project. Tasks further down the project timeline are always to the right of tasks earlier in the timeline, and tasks that depend on a previous task are connected to that task with arrows.

According to Wikipedia, the Gantt chart as we know it was created and popularized by Henry Gantt during the years 1910 to 1915. He initially designed this tool to help measure the productivity levels of his employees, but as time passed, the Gantt chart became more and more widespread across many industries. The Gantt chart was even used in World War I!

In this article, we’ll guide you through the process of building a Gantt chart for your web application using a JavaScript library called Frappe Gantt.

To follow along with this tutorial, you’ll need the following:

What is Frappe Gantt?

Frappe Gantt is a free, open source JavaScript library created and maintained by the Frappe team. Frappe Gantt makes it extremely easy for you to build interactive, easily customizable Gantt charts with JavaScript.

In this tutorial, you’ll build a Gantt chart to manage the development of a website. We’ll follow the steps in the order below:

Let’s create the structure for our project and install Frappe Gantt. Start by creating a directory for the project and call it gantt-demo. Inside gantt-demo, create a folder called build. Create three files inside build, index.html, style.css, and script.js. 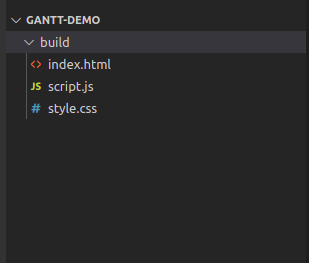 Next, we’ll write some foundational markup for our Gantt chart. Paste the following code in build/index.html:

There are a couple of ways that you can include Frappe Gantt in your project. For one, you can use the library from CDN, or you can install it locally with npm. Installing it with npm is recommended, so we’ll use that approach.

Open your terminal and navigate to the gantt-demo directory, then run the following command: 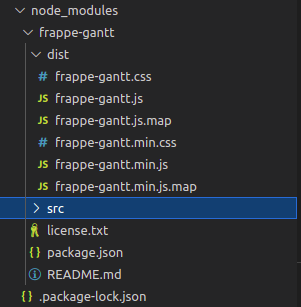 Copy the dist folder from node_modules/frappe-gantt and paste it into build. After that, add the following code to the head of your build/index.html file:

If you’re using Frappe Gantt in a project that already has a bundler set up, like a Vue or React project, you don’t need to copy the dist folder. Simply go to the JavaScript file you want to use Frappe Gantt in and add the following code to your import statements:

Initialize the chart with tasks

Now that our setup is complete, our next job is to create the chart with an initial set of tasks. Since the chart is for a website development project, you’ll be creating the chart with these tasks:

How are you going to represent these tasks as the bars of a chart? In Frappe Gantt, tasks are represented by JavaScript objects with the following structure:

To add your tasks to a Gantt chart, you’ll create an object like this for each task, then put all the tasks in an array. Copy the following code into your build/script.js:

Then, to render the chart, add the following JavaScript code to your script.js:

The last argument to the constructor is an options object that allows you to further customize your chart. You’ll fill it out later in this tutorial, but leave it empty for now.

Next, add some styling to your chart by pasting the following code in your build/style.css file:

At this point, if you open the build/index.html file in your browser, your webpage should look like the following image:

By default, the time on your chart is measured in days, but Frappe Gantt allows you to change that. Frappe Gantt provides Quarter day, Half day, Day, Week, and Month as unit of time options for your charts.

Let’s implement the ability for our chart to show time in weeks and months as well as days. To build some buttons for your chart, start by adding the following markup to your index.html file just before the script in your body tag:

Next, style this markup by adding the following code to your style.css file:

Finally, add the following JavaScript code to the end of your script.js file:

The JavaScript code above creates click event listeners for each of the buttons in your markup, then calls the change_view_mode() method with the desired unit of time as an argument to change the timescale of your Gantt chart.

Adding event listeners to the chart

Frappe Gantt allows you to specify code to run when a user performs certain actions on your chart.

In this tutorial, you’ll use the on_view_change listener to create a dynamic label that shows the current timescale of your Gantt chart. Start by adding the markup to your index.html above the div that contains your SVG:

Add the following styling to your style.css:

Now, we’ll make the label dynamic. Add an event listener to your constructor by passing it as a property of the third argument as follows:

With Frappe Gantt, you can determine the contents of the popup that appears when your user clicks on a task in your chart by returning custom HTML for each task.

First, you’ll provide a property to the third argument to your constructor, called custom_popup_html. The value of this property is a function that accepts a task object as an argument.

Add the following JavaScript code inside the third argument to your constructor:

Next, add the following styling to your styles.css file:

Each task should now have a custom popup that should looks like the following: 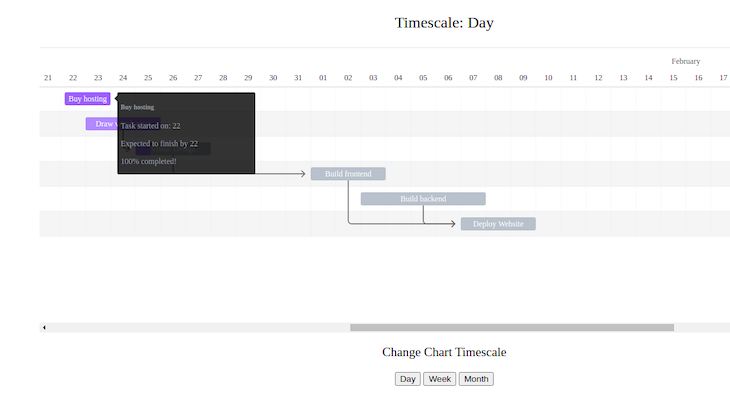 To change the color of the bars, you have two options, depending on whether you’re changing the color of all the bars or only a few of them. Both options involve you writing custom CSS to overwrite the default styling.

The Gantt chart Frappe Gantt constructs is an SVG, so changing the color involves changing the fill and stroke properties of the bars, and not color or background-color as you might expect. To change the color of all the bars, you need to overwrite the following CSS classes:

Here’s an example. Add the following code to your style.css file:

This code will give all your task bars a red background, a yellow progress indicator, and purple text. Here’s what your chart should look like after the change:

If you only want to change the look of some of the bars, you can use the same strategy with a slight modification. You’ll use the custom_class property of each task object (in your JavaScript) to specify a class that should be applied to the task bar, and then style the chart elements based on the custom class.

To illustrate, let’s say the second and third tasks are very high priority, and we want those task bars to have green backgrounds instead of red ones, and blue progress bars. Here’s what that code would look like. Add the following to your style.css:

Now that this is in place, all you have to do is add special as the value of custom_property in the special tasks. Add the following to your script.js file, after you declare the tasks variable:

And now, the second and third tasks will have a different look:

The last thing you can tweak about the task bars is their height, and doing so is easy. Frappe Gantt task bars are rect SVG elements, with a default height value of 20, and Frappe Gantt allows you to edit this default by passing an option to the Gantt constructor called bar_height.

As an example, let’s double the height of our task bars. Add this line inside the third argument to your Gantt constructor (the options object):

Now, each task bar should be noticeably larger:

Much like the bars, Frappe Gantt allows you to customize the appearance of the dependency arrows. You do this by overriding CSS classes. Let’s say you wanted the arrows to be blue, and to double in thickness. Here’s the CSS you would write:

Frappe Gantt also allows you to adjust how much your arrows should curve by passing a property called arrow_curve to the constructor. The default value of this property is 5. To illustrate, we’ll double it. Add the following to the options object of your Gantt constructor:

And your task arrows should now look like this:

Frappe Gantt doesn’t allow you to create new timescales for your chart, but it does let you specify which one the chart should start out with. Once again, the solution is the options object. Let’s assume you wanted to make your chart start off on the week view, instead of the day view. You’d add the following line to the options object:

And the chart would start off in the week view on page load.

In this article, we covered building a Gantt chart using Frappe Gantt, an interesting, open source library that greatly simplifies generating Gantt charts. A Gantt chart is a great tool for managing teams, and we learned to easily customize ours to best suit our needs.

You can check out a live demo of Frappe Gantt, as well as a collection of useful examples. Thanks for reading!

Paul Akinyemi Follow I'm a fullstack web developer and technical writer with experience in JavaScript and Python. I love bringing pretty and complex user interfaces to life with clean and efficient code.
« Using Rollup to package a library for TypeScript and JavaScript
What you need to know about the Block Protocol »