What is a progressive web app (PWA)?

Progressive web apps are a (terribly named) wonderful idea. You can build an app that serves all devices and form factors once using web technologies. It can be accessible over the web but also surface on the home screen of your Android/iOS device. That app can work offline, display a splash screen when it launches, and have notifications, too.

PWAs can be a money saver for your business. The alternative, should you want an app experience for your users, is building the same application using three different technologies (one for web, one for Android, and one for iOS).

When you take this path, it’s hard to avoid a multiplication of cost and complexity. It often leads to dividing up the team as each works on a different stack. It’s common to lose a certain amount of focus as a consequence. PWAs can help here. They are a compelling alternative not just from a developer standpoint, but from a resourcing one, too.

However, the downside of PWAs is that they are more complicated than normal web apps; writing one from scratch is just less straightforward. But there are easy on-ramps to building a PWA that help guide you on the road to success. This post will highlight one of these — how you can travel from zero to a PWA of your very own using React and TypeScript.

Building a PWA with create-react-app

To create our PWA, we’re going to use create-react-app. This excellent project has long had inbuilt support for making PWAs. In recent months, that support has matured to a very satisfactory level. To create ourselves a TypeScript React app using create-react-app, enter this npx command in the console:

This builds you a React web app built with TypeScript. It can be tested locally with:

From web app to PWA is incredibly simple — it’s just a question of opting in to offline behavior. If you open up the index.tsx file in your newly created project, you’ll find this code:

… It will take care of generating a service worker file that will automatically precache all of your local assets and keep them up to date as you deploy updates. The service worker will use a cache-first strategy for handling all requests for local assets, including navigation requests for your HTML, ensuring that your web app is consistently fast, even on a slow or unreliable network.

Under the bonnet, create-react-app is achieving this through the use of technology called Workbox. Workbox describes itself as “a set of libraries and Node modules that make it easy to cache assets and take full advantage of features used to build Progressive Web Apps.”

The good folks at Google are aware that writing your own PWA can be tricky. There’s much new behavior to configure and be aware of; it’s easy to make mistakes. Workbox is there to help ease the way forward by implementing default strategies for caching/offline behavior, which can be controlled through configuration.

A downside of the usage of Workbox in create-react-app is that (as with most things in create-react-app) there’s little scope for configuration of your own if the defaults don’t serve your purpose. This may change in the future — indeed, there’s an open PR that adds this support.

Customizing your PWA with React

But it’s not just an offline experience that makes this a PWA. Other important factors are:

All of the above is “in the box” with create-react-app. Let’s start customizing these.

First of all, we’ll give our app a name. Fire up index.html and replace <title>React App</title> with <title>My PWA</title>. (Feel free to concoct a more imaginative name than the one I’ve suggested.) Next, open up manifest.json and replace:

Your app now has a name. The question you might be asking is: What is this manifest.json file? Well, to quote the good folks at Google:

The web app manifest is a simple JSON file that tells the browser about your web application and how it should behave when ‘installed’ on the user’s mobile device or desktop. Having a manifest is required by Chrome to show the Add to Home Screen prompt.

A typical manifest file includes information about the app name, icons it should use, the start_url it should start at when launched, and more.

So the manifest.json is essentially metadata about your app. Here’s what it should look like right now:

You can use the above properties (and others not yet configured) to control how your app behaves. For instance, if you want to replace the icons your app uses, then it’s a simple matter of:

Creating multiple URLs in your PWA

So far, we have a basic PWA in place. It’s installable. You can run it locally and develop it with yarn start. You can build it for deployment with yarn build.

What this isn’t, however, is recognizably a web app in the sense that it doesn’t have support for different pages/URLs. We’re typically going to want to break up our application this way. Let’s do that now. We’re going to use react-router, the de facto routing solution for React. To add it to our project (and the required type definitions for TypeScript), we use:

Now let’s split up our app into a couple of pages. We’ll replace the existing App.tsx with this:

This will be our root page. It has the responsibility of using react-router to render the pages we want to serve, and also to provide the links that allow users to navigate to those pages. In making our changes, we’ll have broken our test (which checked for a link we’ve now deleted), so we’ll fix it like so:

Replace the App.test.tsx with this:

You’ll have noticed that in our new App.tsx we import two new components (or pages): About and Home. Let’s create those. First, About.tsx:

Now that we’ve split up our app into multiple sections, we’re going to split the code, too. A good way to improve loading times for PWAs is to ensure that the code is not built into big files. At the moment, our app builds a single-file.js. If you run yarn build, you’ll see what this looks like:

Notice the build/static/js/main.bc740179.chunk.js file. This is our single-file.js. It represents the compiled output of building the TypeScript files that make up our app. It will grow and grow as our app grows, eventually becoming problematic from a user loading speed perspective.

create-react-app is built upon webpack. There is excellent support for code splitting in webpack, and thus, create-react-app supports it by default. Let’s apply it to our app. Again, we’re going to change App.tsx.

Where we previously had:

Let’s replace it with:

This is the syntax to lazily load components in React. You’ll note that it internally uses the dynamic import() syntax, which webpack uses as a “split point.”

Let’s also give React something to render while it waits for the dynamic imports to be resolved. Just inside our <Router> component, we’ll add a <Suspense> component, too:

The <Suspense> component will render the <div>Loading...</div> while it waits for a route’s code to be dynamically loaded. So our final App.tsx component ends up looking like this:

This is now a code-split application. How can we tell? If we run yarn build again, we’ll see something like this:

As we continue to build out our app from this point, we’ll have a great approach in place to ensure that users load files as they need to and that those files should not be too large — great performance that will scale.

Now that we have our basic PWA in place, let’s deploy it so the outside world can appreciate it. We’re going to use Netlify for this.

The source code for our PWA lives on GitHub here.

We’re going to log in to Netlify, click on the Create a new site option, and select GitHub as the provider. We’ll need to authorize Netlify to access our GitHub. 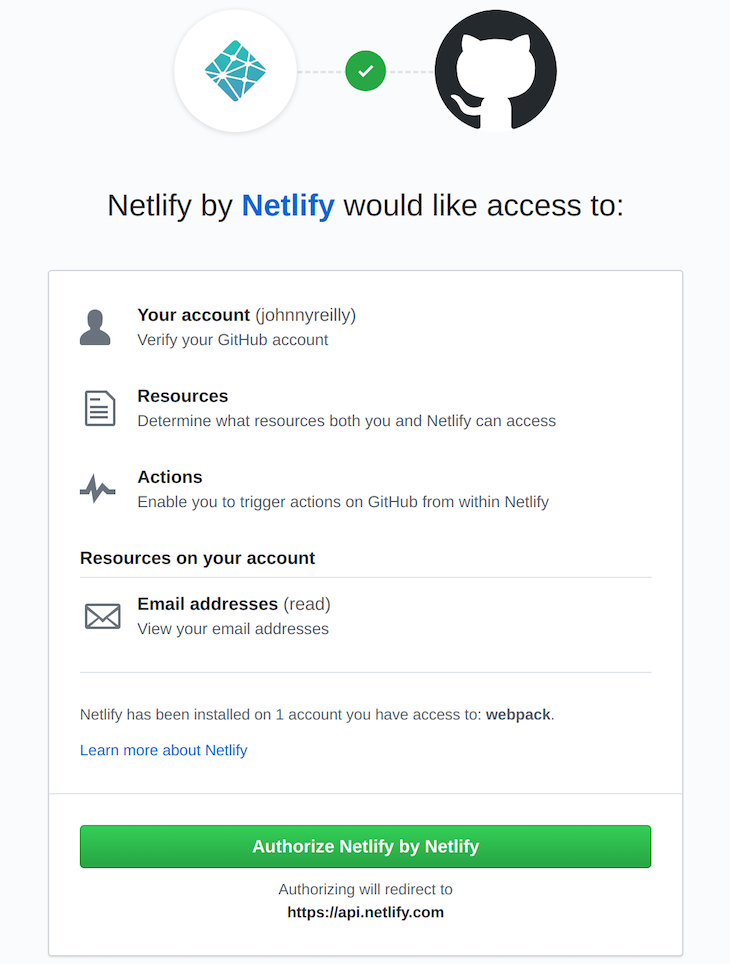 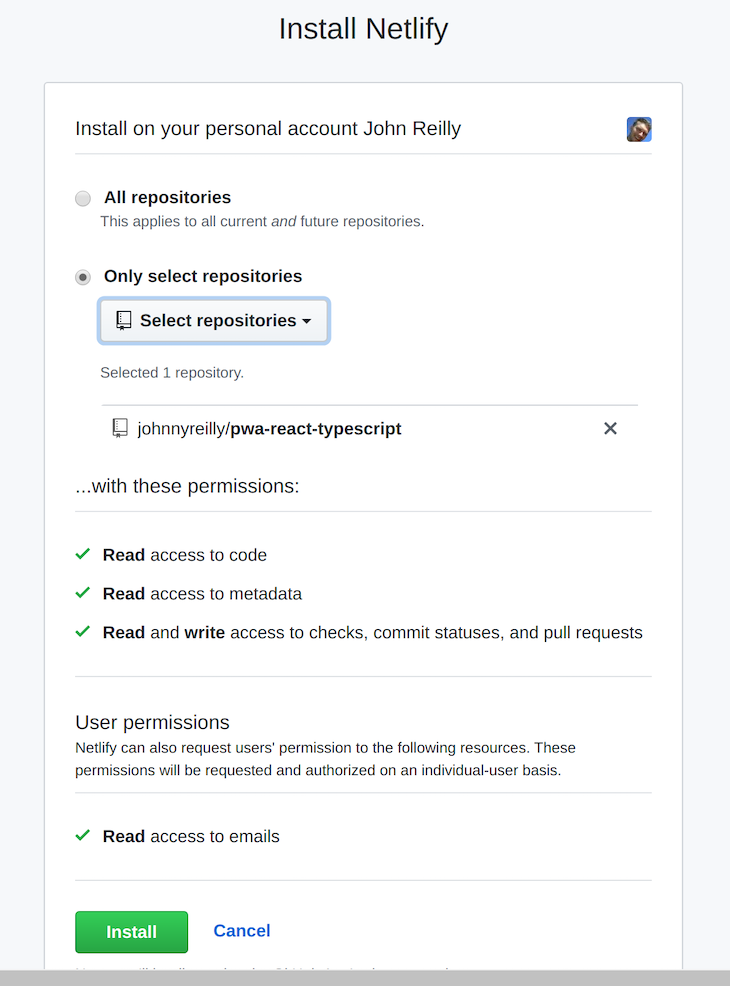 Then you can select your repo from within Netlify. All of the default settings that Netlify provides should work for our use case: 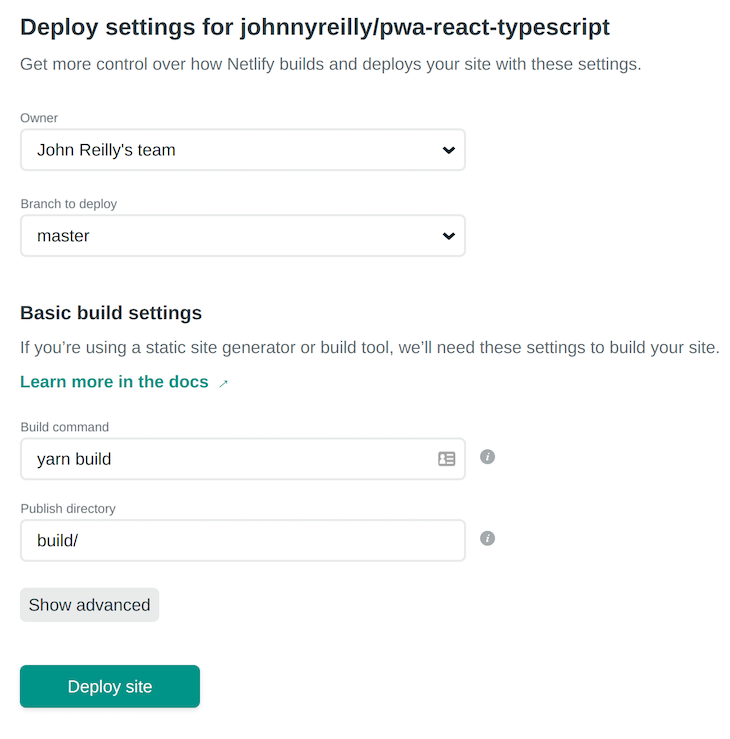 Let’s hit the magic Deploy site button! In a matter of minutes, you’ll find that Netlify has deployed our PWA.

If we browse to the URL provided by Netlify, we’ll be able to see the deployed PWA in action. (You also have the opportunity to set up a custom domain name, which you would typically want outside of a simple demo such as this.) Importantly, this will be served over HTTPS, which will allow our service worker to operate.

Now that we know it’s there, let’s see how what we’ve built holds up according to the professionals. We’re going to run the Google Chrome DevTools Audit against our PWA:

That is a good start for our PWA!

5 Replies to “Build a progressive web app (PWA) with React”