How to run SQL Server in a Docker container 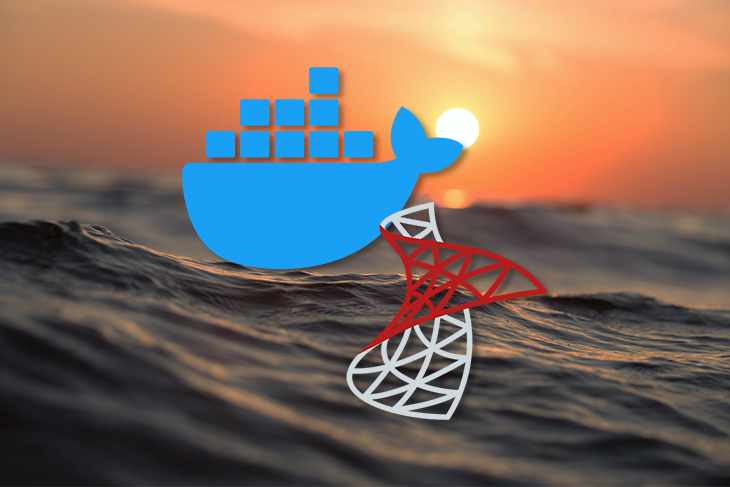 Editor’s note: This Docker and SQL Server tutorial was last updated on 28 May 2021 to include information about the most recent release of SQL Server 2019. It may still contain some information that is out of date.

It wasn’t long ago that the idea of running, let alone developing, a .NET application or service on any platform outside of Windows was ludicrous. But with Microsoft’s current focus on open source, those days feel like a distant memory.

With the ability to develop using dotnet core, the world of cross-platform .NET has opened up. As of the release of SQL Server 2017 (the current version is SQL Server 2019), you can develop applications and services that can run on Windows, Mac, and even Linux. But what about database technologies?

In this guide, we’ll demonstrate how to launch a SQL Server database inside a Docker container.

What are Docker and SQL Server?

Developed by Microsoft, SQL Server is one of the most popular relational database technologies in the world. Its primary function is to store and retrieve data quested by other applications. SQL Server is commonly used in applications that support transactional and analytical workloads.

Docker enables you to create, manage, and run applications using portable, self-sufficient, and lightweight containers. Containers enable you to package your application along with the dependencies it needs to run from one computing environment to another with minimal breaking changes.

Can SQL Server run on Docker?

Many .NET-focused developers tend to lean toward using Microsoft SQL Server for their relational database needs. But SQL Server, for as long as many people can remember, can only run on a Windows platform. Our cross-platform .NET development just came to a screeching halt.

To solve that problem, you can use Microsoft SQL Server across multiple platforms by leveraging Docker.

For a visual example of how to run an SQL server in a Docker container, check out our video tutorial below:

To follow along with this guide, make sure you’re using SQL Server 2017 or above. Otherwise, you won’t be able to use cross-platform SQL Server. The most recent version is SQL Server 2019 (15.x), released on 4 November 2019. Use this complete SQL Server version history to ensure your stack is up to date.

You must have docker installed with docker-compose included. This is usually all handled for you if you use Docker Desktop for Mac.

Finally, we’ll use the npm library mssql to connect, update, and query the database container. You can install that locally or globally with an npm install mssql command from any terminal.

Got those all squared away? Cool, let’s learn how to launch an SQL Server database for cross-platform development.

How to run SQL Server in a Docker container

To launch an SQL Server container, first create a docker-compose.yml file in the root of your project. Inside that file, define a sql-server-db resource that uses the SQL Server image that Microsoft provides.

To launch our database, we can run an up command from our command line:

We can see in our terminal that the sql-server-db has been successfully created. Now we can explore how we can connect to it to run some queries. Let’s start off by just connecting to our database container:

We should now see that we are connected to our database, and mssql is waiting for a command. Let’s go ahead and run the .databases command to see what databases are inside our SQL Server container:

We see that the standard SQL Server databases are present — master, model, msdb, and tempdb. Let’s go ahead and create our own database and a table inside of it. We can do that by creating a SQL script file called my_db_setup.sql that we can run inside our container.

Now that we have our setup script, we can run it against our database container using mssql:

Now that we have run our script, we can list our databases and tables to see everything that just got created:

Just like that, we have our own database and a table configured inside of it. All of this is running as a Docker container that we can share with others and run across a variety of different platforms.

Microsoft has been upgrading more and more of its frameworks, tools, and languages to support cross-platform development. dotnet core is a huge leap forward in terms of .NET/C# development because it can run on Windows, Mac, and Linux.

But .NET is merely a framework; we also need the tools that we often use in that ecosystem to support multiple platforms. That is what we demonstrated here: SQL Server 2017 and above can be run on any platform by leveraging container technology.

With a few lines in a Docker compose file and a simple npm library like mssql, we can launch a SQL Server Database on any platform. This is incredibly handy not only for production deployments but for development environments as well.

Other developers within a team can now use the same database by running docker-compose up and running whatever seed database script we have on hand. We could even create our own Docker image that has the entire database configured and then use that image in our Docker compose file.

With things like Docker and dotnet core, the world of cross-platform development using the .NET ecosystem is more possible than ever before.

If you have any questions about this blog post, AWS, serverless, or coding in general, feel free to ping me via twitter @kylegalbraith. Also check out my weekly Learn by Doing newsletter or my Learn AWS By Using It course to learn even more about the cloud, coding, and DevOps.