Jobin Lawrance Follow I'm a software engineer based in Mumbai with 5 years of experience in mobile, web, and backend development. I'm currently working as an Android Engineer at Gojek.

Creating a GraphQL server with Ktor 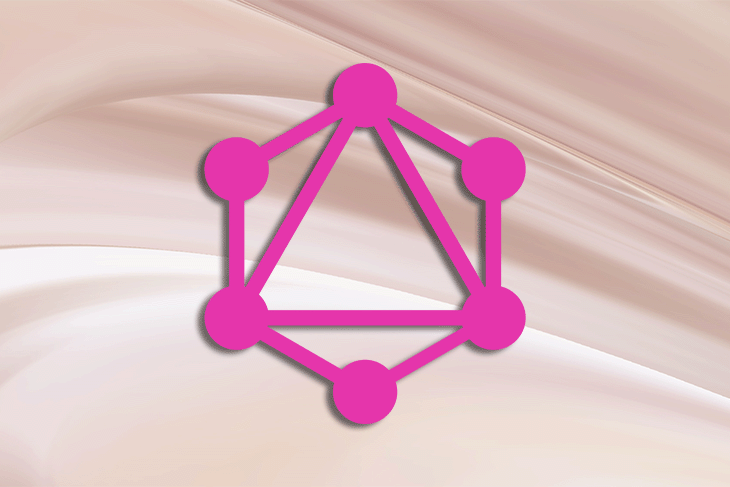 Up until recently, REST was the de-facto design for creating a backend API. Over the past couple of years, GraphQL has grown in popularity as an alternative to REST.

Similarly, in mobile development, Kotlin has started gaining recognition among Android developers as an alternative to Java. The popularity of Kotlin has seen it being used in other technologies like backend and cross-platform app development.

In this article, we will take a look at setting up GraphQL in Ktor and exposing an existing datasource as a GraphQL API.

What to know about Ktor and GraphQL

Before we head into the details, here’s a rundown of the solutions we’ll be discussing in this article.

Ktor is an asynchronous framework used to create web applications. It allows developers to easily create a backend API in Kotlin for mobile or web clients.

GraphQL is a language for querying data, which it does by exposing data from an underlying datasource. GraphQL does not query a table or database; it is agnostic of where the actual data resides (SQL/NoSQL databases, files, microservices, REST APIs, etc.)

(Note: These are just specifications and not a rule — a backend server can choose to mutate its data in a query operation.)

Similarities between Kotlin and GraphQL

We can create a starter Ktor project from here, or use the IntelliJ plugin (for IDEA Ultimate Edition).

We will use the KGraphQL library to expose data as a GraphQL API. I will be using an existing MySQL database with [SQLDelight] from a previous project as an underlying datasource.

The database contains a list of movies that is exposed as a GET query in the /movies endpoint. 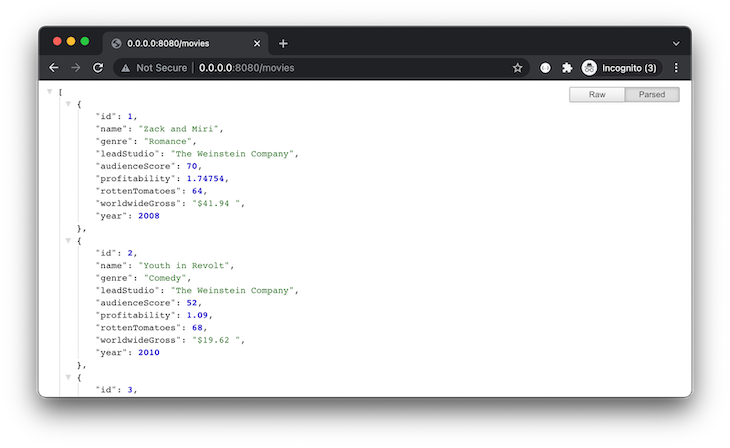 Then, add the above extension function to Ktor’s Application.kt file:

Now, when we run the application and hit the /graphql endpoint, we are presented with a GraphiQL (pronounced “graphical”) playground. This allows us to test our GraphQL queries during development. 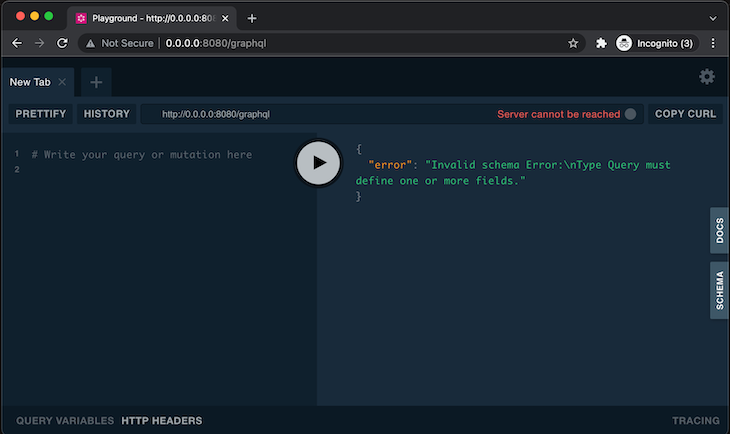 We can register our Movie data class as a GraphQL output type by adding it to the schema block of the KGraphQL.kt file.

Now, in our GraphiQL playground, we can see the details in the “SCHEMA” tab. 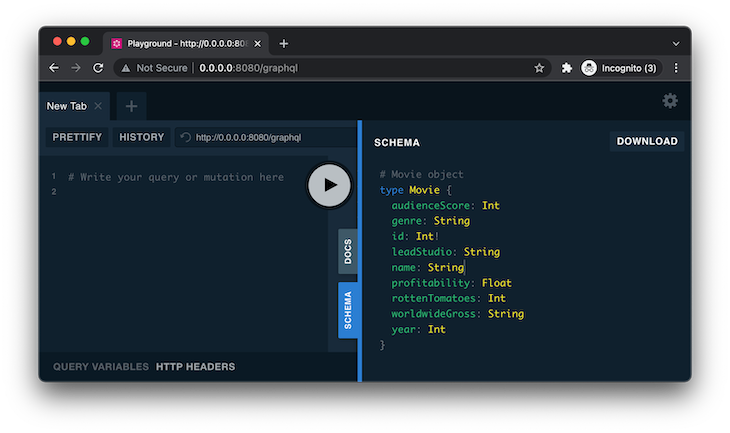 To create a simple query that returns the list of movies, we will add the following code in our schema block:

(Note: Here, movieRepository.getAllTheMovies() internally queries the MySql database. You can change it to whatever data source you would like.)

Now, let’s write our first GraphQL query in the playground and click the “Run” (presented as a “Play” symbol) button. 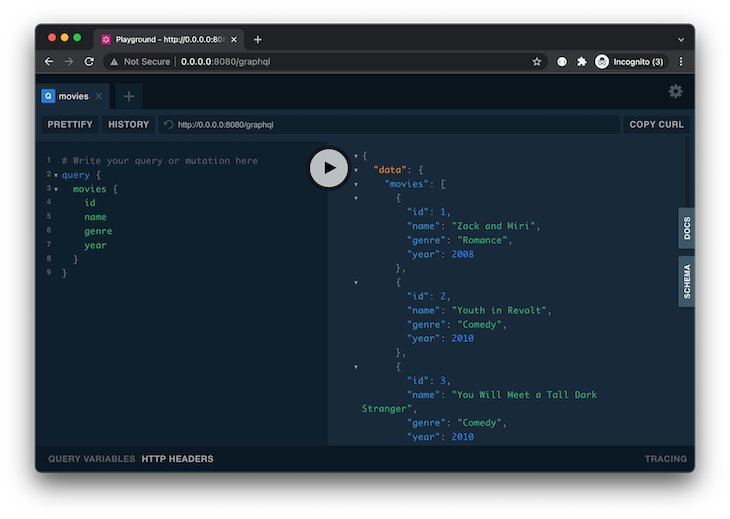 To add an argument to the movies query, we can modify our resolver. We will add the parameter first to limit the number of movies returned.

To run our previous query, we need to provide a value for first:

This is a required argument, without which GraphQL will throw an error like this: 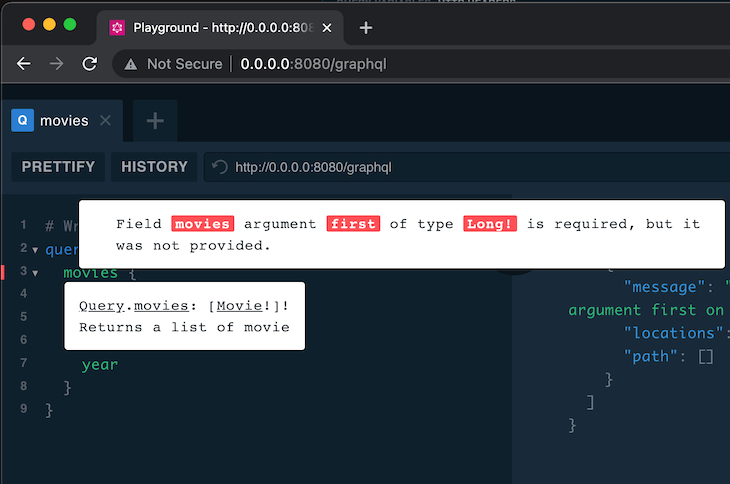 To make the argument optional, we can provide a default value to our resolver using the withArgs closure, demonstrated here:

Now, if we run the movies query without the first argument, it will use the default value of 10.

Similarly, we can create another query to fetch a single movie that matches with id.

We can create a mutation operation similar to our query operation:

Running the above schema throws the following error:

To use a custom class as the resolver argument’s type, we need to register it as inputType. This is different from the type<movie>{..} registration we did earlier.

Running the below query adds a new row to our database: 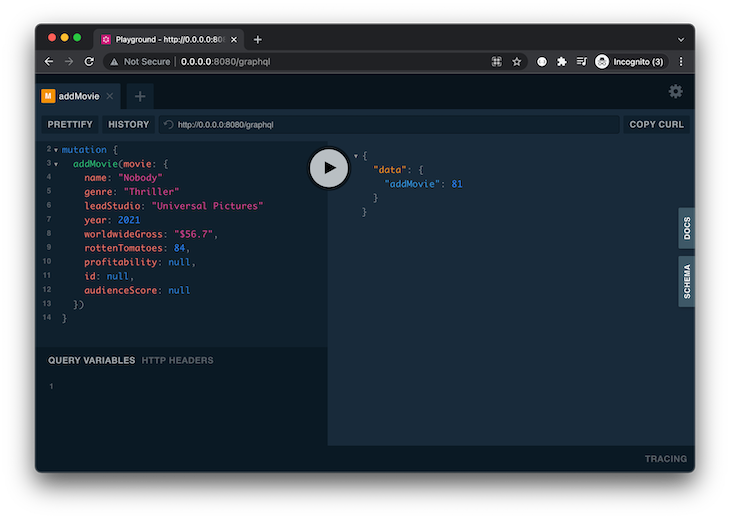 We can also use the “Query variables” tab in GraphiQL Playground and pass the movie object as a JSON-encoded variable: 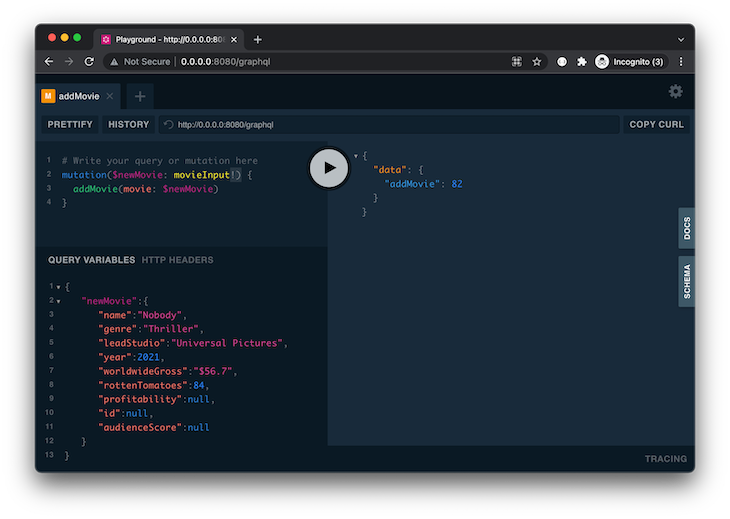 Similarly, to update an existing movie, we can create another mutation — this time, instead of returning just an id, we are returning the movie object. 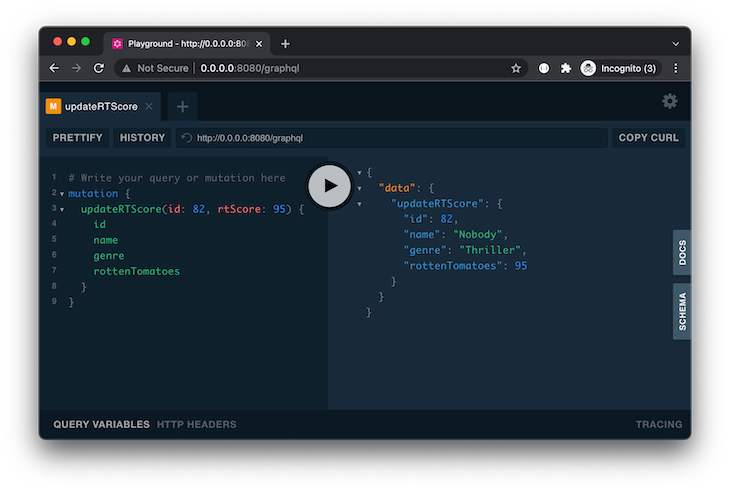 (Note: In a mutation operation, it’s up to us to return an id or a whole movie object, or anything else depending on the requirement.)

KGraphQL does not support Subscription operations at the time of writing this article.

Playground is used during development; we need to turn it off when we deploy our backend application. 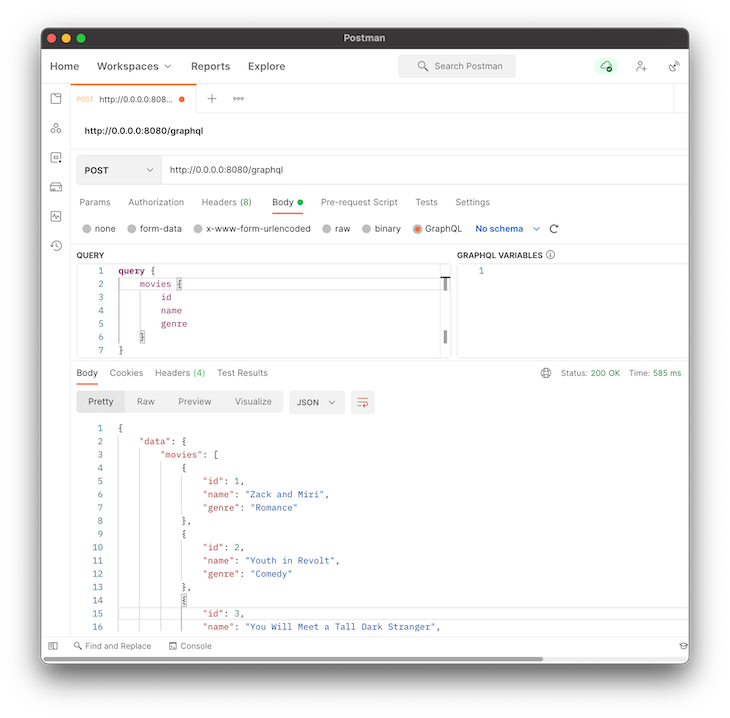 I’m using the Postman application to test the endpoint. In the Body, we can pass the query, as seen earlier, (since Postman has support for GraphQL) or a JSON-formatted request like below.

We can also change the default /graphql endpoint to something custom, like /movies-graphql, in the install block, and restart our application.

Now our GraphQL API will be served at this endpoint: https:0.0.0.0/movies-graphql.

The complete source code for this project is available here.

This article showed you how to create a GraphQL server in Ktor and how to expose underlying data sources as GraphQL API endpoints.

We also looked at setting up GraphQL Playground for testing and debugging queries and mutations during development, as well as disabling Playground for the final rollout of production.

Jobin Lawrance Follow I'm a software engineer based in Mumbai with 5 years of experience in mobile, web, and backend development. I'm currently working as an Android Engineer at Gojek.
« Build a native audio plugin with Elementary
Using React’s useEffect Hook with lifecycle methods »

4 Replies to “Creating a GraphQL server with Ktor”