Building a roguelike game with Rot.js

A roguelike game is a subgenre of role playing video games which is very often characterized by turn-based gameplay, randomly generated levels, and permanent death of the playable character. A popular product of this genre is Dungeons & Dragons, a role based game in which a bunch of characters embark on imaginary adventures in a fantasy setting.

Roguelike games have a lot of characterizing popular features. This often spurs casual and novice gamers to argue on the “real characteristics” of roguelike games.

Our blog post covers how to create one using Rot.js – a library that helps with the development of roguelike games in the browser environment.

The features honed by Rot.js are: RNG (for generating levels procedurally), pathfinding (for players and AI), FOV computation, and key bind configuration, just to name a few.

When looking at the state of roguelike games on the web, it is clear that a lot of roguelike games have been created and made available in the browser. Rot.js positions itself right at the middle of the conversation with its astonishingly easy-to-use functions.

How can Rot.js help you?

Rot.js is a set of JavaScript libraries, designed to help with a roguelike development browser environment.

Rot.js was designed to help with the traditional chores of developing a roguelike game. It was modeled after “libtcod“, which provides a simple API to help developers with their future game’s true color, input, and utilities.

There exists a plethora of games made with Rot.js. These could serve for inspiration or showcase purposes.

We are going to build a simple roguelike game with Rot.js. Our aim is to harness the graphical, RNG, scheduling, and pathfinding APIs provided by Rotjs.

ROT.Display() provides a canvas-based output that can be configured to the game specifications.

The display is configured using these values:

These are extremely important because they are what the user sees and how your game is displayed.

Rot.js also allows developers to create tiles which can be used to organize tiles, stack, or customize their colors and appearance to suit the game.

Tiles-style graphics are the ones seen in games like Pokemon on Gameboy. This is suitable if you want to use high-fidelity graphics in your game. It is very easy to implement with Rot.js: you simply reference characters to tiles. Glance through the docs for a better overview of how to slice your tileSet into different tiles.

There exist several map generator tools in Rot.js. They are being utilized the same way:

Rot.js is shipped with 3 different types of generators: Maze, Cellular and Dungeon. These can be tweaked and randomized to suit the game design you are aiming for. 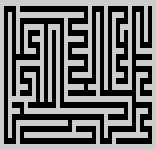 This family of algorithms uses the following callback values: 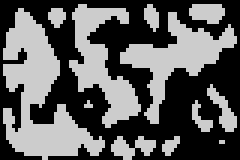 These cow looking maps are known as cave systems. They can be created using Rot.js’ Cellular generator. As seen in the image above, the map’s shape doesn’t follow any particular geometry.

This complexity is achieved through the configurations made possible on the ROT.Map.Cellular API.

As with the other map types, cellular automata takes height and width arguments. Adding to this, we can configure: born, survive, topology, set(x, y, value) and- randomize(probabilty), which are detailed in the docs. 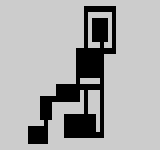 This family of map generators produces corridors and rooms.

While the built-in Math.random() function provides suitable results for game development purposes, it is quite weak. Most notably, it is not possible to seed the generator in order to reproduce a a proper sequence of values.

Rot.js has 3 built-in scheduling strategies (simple, speed, action-duration) which can each correspond to the game you are building. It is also very important to note that Rot.js supports an asynchronous game engine.

Asynchronous tasks can be handled using the native async await or promises available in JavaScript. ROT.Engine is ready for a promise-based async control flow: if any actor returns a “thenable” from its act() method, the engine locks itself and waits for the thenable to get resolved (via its then() method).

Pathfinding or pathing in game development is the plotting of the shortest route between two points. It is a practical variant of solving maze games — Wikipedia.

Pathing greatly helps roguelike games to have better AI, feel, and interaction. Rot.js implements pathing by following Djikstra’s Algorithm, which is based on finding the shortest route between two nodes in a graph.

Taking care of user input boils down to listening for proper keyboard events (keydown, keypress, keyup) and processing them. Rot.js does not offer any support methods or objects; instead, it defines a large set of ROT.KEYS.VK_* constants to distinguish between pressed keys.

You may want to check out the complete listing. This feature enables the users to “play” the game using emitted keyboard events from keys such as “W-A-S-D”, or any other.

Rot has quite handy functions extensions in ROT.Util, which may help with number and string manipulation.

We aim to learn rogue by creating a little game that utilizes its main features in order to learn how each of them work. The game’s name is Log the Rocket.

To win this game, the player has to make the rocket find the earth and go to the next level of a generated cellular map. Awesome, right?

Where do we start?

We are in a browser, so we obviously start with our basic HTML, CSS, and JavaScript file. Rot.js is a JavaScript library, thus it is installed or imported as a basic script in your HTML file.

Here, index.js will be the script containing Rot.js as an import. Rot.js’ display will be attached to the element with id canvas with the line let canvas = document.getElementById("canvas"); when the script will be run.

You may now include your CSS files, which contain the different imported fonts (if you need one) or other styles that will make the canvas look good.

When coding a game, it’s easier to go with this simple approach: prepare the game objects (world, game engine, colors, display, player etc) and initialize them with the attributes they shall work with.

In our game we have these 4 objects: displayOptions, colors, Game, GameWorld and Player. Among these, we have 3 dynamic objects and one static object (knowing this will help us structure our JavaScript code properly).

I selected an object approach to keep things simple for the tutorial. However, any seasoned JavaScript developer will feel like these dynamic objects would be better if written with the class syntax (they are right).

Notice that the dynamic objects use let, which allows you to reassign certain attributes of the object (hence they are called dynamic), as opposed to const, which is read-only.

We can now fill our configuration attributes accordingly. We start with these because they enable the framework to get set up as seen above. They will be used all along the coding process.

Now that our game has the set up and configurations it needs, we have to start displaying stuff on our screen.

The elements of the global game engine (responsible for making the game “playable”) will go inside the Game object.

Above is the full Game object. Let’s briefly go through the different functions.

Now that our game engine is created, we have to look at GameWorld.

In this object, we are going to randomly generate our map using Rot.js and use a little trick to make the walls block the player’s movement.

Above is our GameWorld, which contains our map generator and map options.

At last we create our Player: the one responsible for interacting with the game.

Our last lines help us capture key events from our browser and load the game. These three lines are the deep connection between the script and the browser.

Voilà! Our game is ready to be played. You can try it out on the link below, feel free to go through the full game code right here, fork it, and make additions or anything you want.

Rot.js helped with the big task of creating a random map at each time, mapping the keys, and displaying everything in the browser.

Just from this little game, we were able to illustrate the following rogue features: RNG, input key mapping, and display. We may use Rot.js pathfinding and scheduling abilities if ever we need to add enemies and roles to play.

A lot good improvements could be made on our game:

What makes game development beautiful is that it goes as far as your creativity goes. You are able to build whatever you wish, provided you are using the right tools.

Libraries like Rot.js make game development using web tools much more accessible. Via a nimble library, it is possible to provide great abstraction to concepts and techniques that were previously extremely difficult to master and produce.

Dylan Tientcheu Follow I build experiences to make your everyday life simpler.
« Why reinvent the wheel? These 5 mobile game engines can give you a head start
Teaching a 13-year-old how to host a webpage on Netlify »