Build a privacy-focused comments section on your Next.js blog 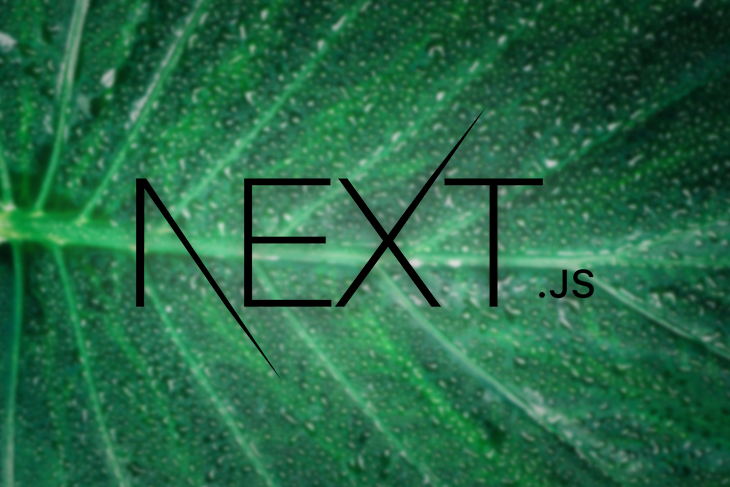 When you are creating a blog website, one of the things that should always concern you is the comments section. You can try to use your own implementation, but it may not be the best option if you don’t have much time and want to keep things simple. A great solution is Remark42, a commenting engine that gives you the control so you can host the comments section on your own server.

You can also implement Google login in Remark42 so that your readers don’t have to go through the tedious process of entering their email and password. Comments on each page are tracked separately, so you don’t need to keep track of blog posts for comments.

Today, we are going to implement Remark42 in a simple blog application made using Next.js and Tailwind CSS. We will only be focusing on the comments section part of the blog. Remark42 doesn’t have native implementation for Next.js, but I have built a workaround that shouldn’t cause any problems.

If you get stuck in the tutorial, or need reference to the code, feel free to refer to the GitHub repository.

Setting up a Remark42 server

Let’s set up the Remark42 server. This server will be the home for all of our comments, and also deal with authentication. Head to this link and download the binary relevant to your operating system. For MacOS users, the binary should look similar to this: remark42.darwin-amd64.tar.gz.

Extract the tar.gz archive you just downloaded using a suitable extractor program and launch a terminal inside the extracted folder. Write the following command to convert the binary to an executable so that it can be run by the system:

Make sure you replace the name of the file according to the operating system you’re running. Now that you have converted the binary into an executable, you are able to run the server using the following command:

Make sure you use a unique secret here because it will be used in signing your JSON web tokens for authentication. Provide a site ID too; I’m providing remark123. Once you run the command, the server will start running, and if you visit http://localhost:8080/web, you should see a demo like this: 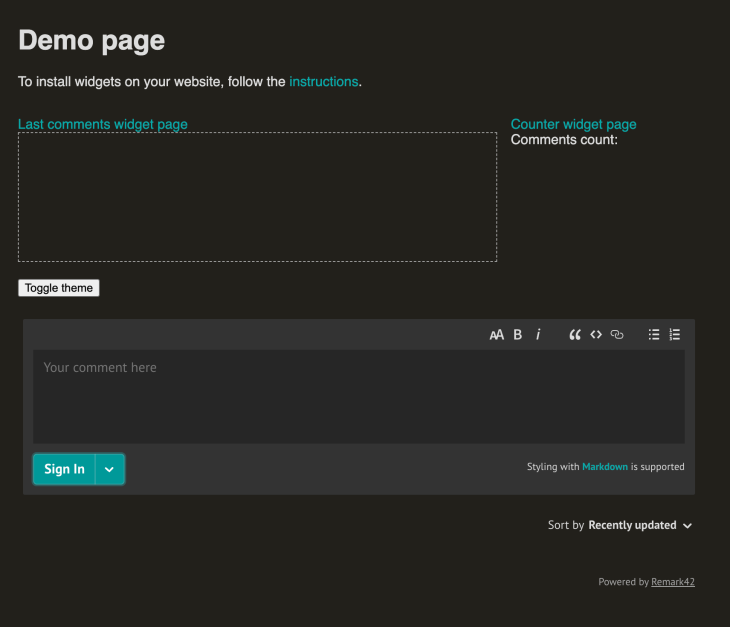 However, you cannot make any comments for now, because we need a proper way to authenticate users in our blog, which is required before they can comment. In this case we will be using Google authentication, however, there are a many ways of authentication supported by Remark42, which you can see here.

First, go to Google Cloud Console. Create a new project if you don’t have one, then click on Credentials on the sidebar. Now you should be presented with the following screen: 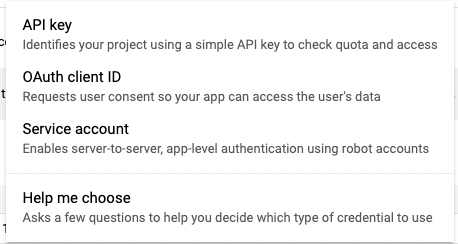 Click on OAuth client ID, because that is what is used for authentication with Google. If you do not have an OAuth consent screen, you will be asked to create one: 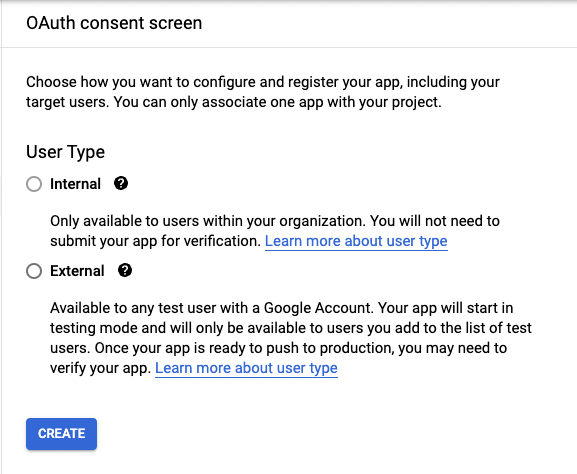 Click on External and then Create. Now you will be asked for some details about your project: 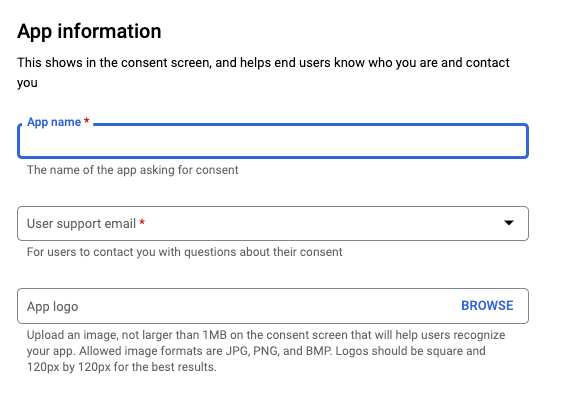 Fill in the relevant details and submit the form. Now, go back to Credentials, create a new OAuth Client ID, and now you shouldn’t be asked to create a consent screen. Add the following details when prompted (these details are according to Remark42’s documentation): 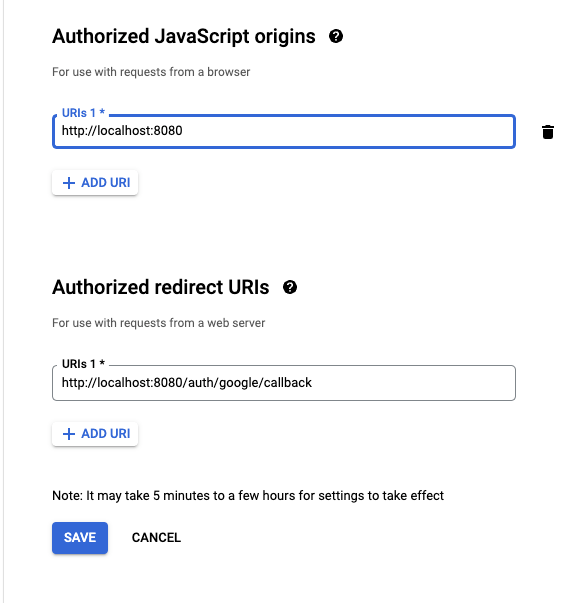 Now you should get your Client ID and Client Secret. Take note of them, but do not share these details with anyone.

Now kill the running Remark42 server and let’s start it again, but adding the Google credentials this time:

Make sure you replace my credentials with your own. Now hit Enter and the server will start running.

Navigate to a safe directory and run the following command to create a new Next.js app:

You can replace remark42-app with any suitable name, as it’s a project name. We are using with-tailwindcss example so that we can get Tailwind CSS pre-installed and we don’t need to worry much about styling.

Go into the pages directory and open index.tsx file, then update the layout as follows:

This will be the basic layout of our dummy blog post on the homepage. We have used {''} under a div because Remark42 causes issues with Next.js and this is a quick fix to one of those issues.

Now let’s add the script near the end of the layout:

Remember to change the host and site_id when you shift to production. Also, it is necessary for the object to be named remark_config because Remark42 looks for this object when initializing.

Because we are running this code in Next.js, we do a quick fix by attaching remark_config to the window object so that the code works properly. And the rest of the code that doesn’t look so pleasant is a script from Remark42 to do everything else. If, for some reason, this code does not work, it might’ve changed and you might need to find the new script from Remark42’s documentation.

Now, run the Next.js development server by running the following command in the terminal:

Now the server should be started. Visit http://localhost:8000 to view the page: 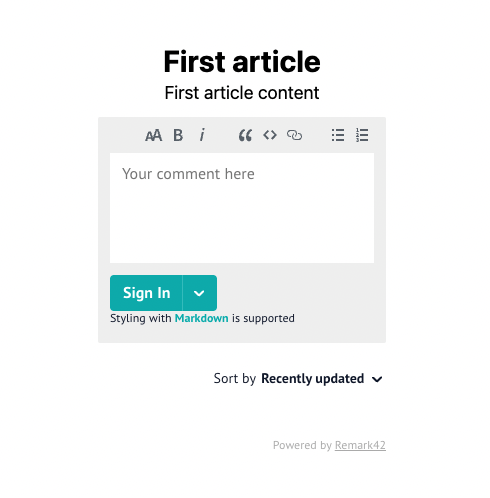 Now you can authenticate and add comments to the page: 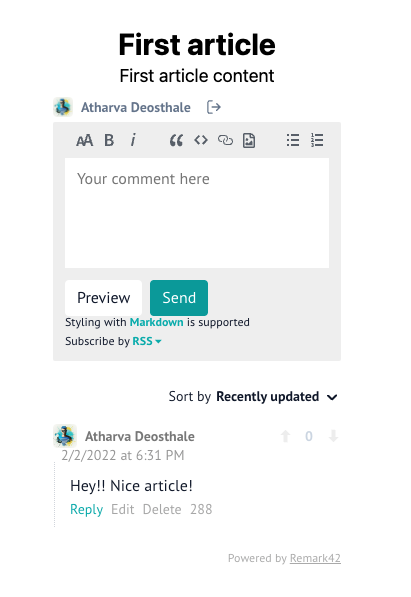 Now, let’s create a new file called second.js in the pages directory to simulate another post in the blog:

It’s similar to the code for the first post. Ideally, you would fetch the post from the database and the URL would be dynamic so you won’t have to deal with repetitiveness. We are doing this approach just to make things simpler.

Now if you visit http://localhost:3000/second, you should see that the original comment we made isn’t there anymore, because it’s a completely different page. This is because Remark42 handles comments for different pages for us.

You can modify the looks and behavior of Remark42 with the various configurations it provides us. For example, if you want to implement dark mode, you simply have to update remark_config as follows:

This will enable dark mode, and your comments section should look like this: 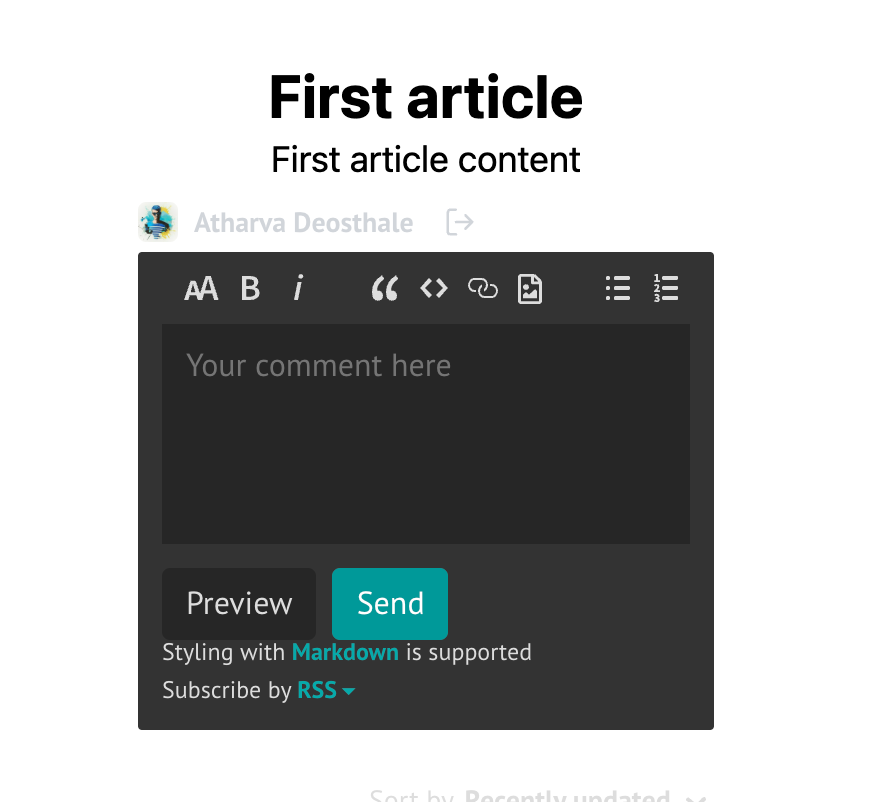 You can also enable simple view, which helps keep things simple in the comments section. In simple view, not a lot of JavaScript is used, and only necessary components are loaded: 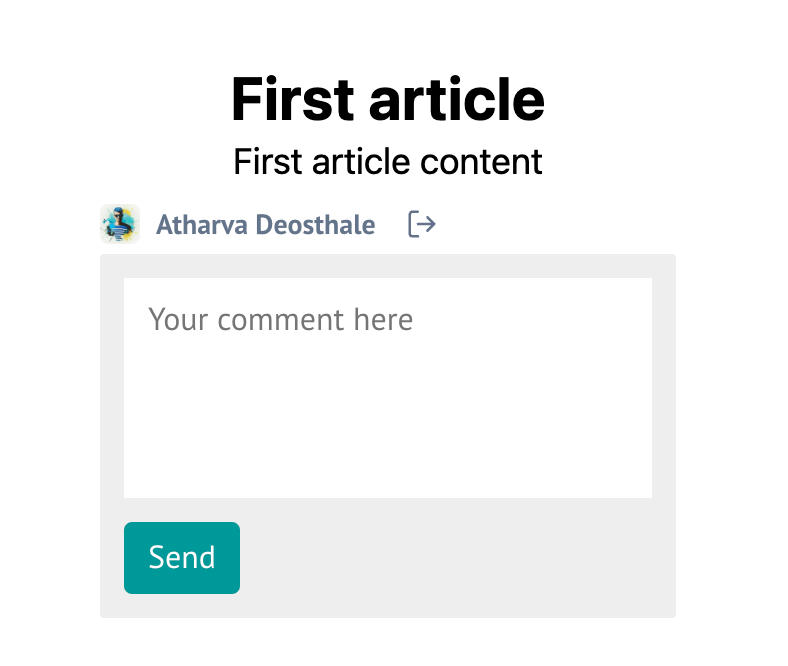 Notice here there’s no support for formatting text. You can find the rest of the configurations here.

Remark42 is a wonderful tool if you are creating a blog but don’t want to make things too complex. You can also try to play with the configurations to modify how it functions overall, and fit it in your blog website accordingly.

Again, if you get stuck in the tutorial or need reference to the code, here’s the GitHub repository.

One Reply to “Build a privacy-focused comments section on your Next.js blog”