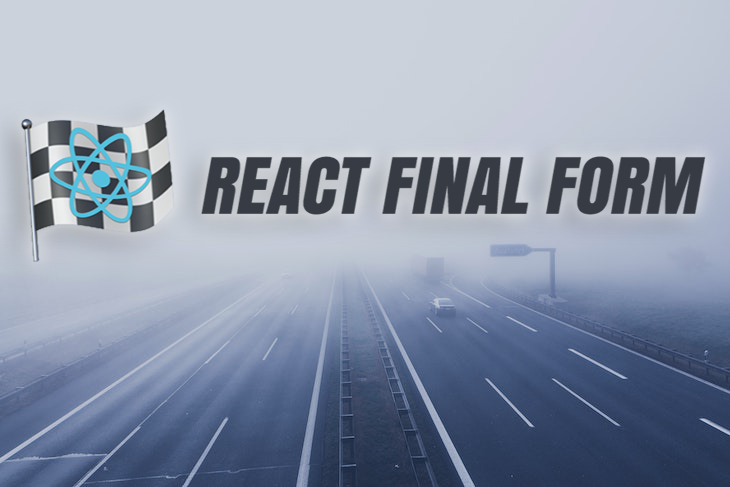 There are many libraries available for creating and managing forms. In React, forms have always been a bit complex. Form libraries aim to simplify form management without compromising performance.

In this article, we’ll look at React Final Form, a popular library for form management. We’ll cover how React Final Form works, compare it to some competitors, and, finally, test it out with a relevant example. Let’s get started!

What is React Final Form?

React Final Form is a lightweight form library written in core JavaScript that acts as a wrapper around Final Form, a form state management library.

React Final Form uses the observer design pattern in which the components subscribe to specific events. Instead of the whole form re-rendering, only the fields that have been subscribed re-render.

Let’s look at some main features of React Final Form.

Although re-rendering is not a big deal in small forms, as form size increases, we see a significant lag in performance with each re-render. Due to its subscription-based pattern, React Final Form only re-renders required fields, preventing delays.

Now that we know the basics of React Final Form, let’s take a look at Formik, a similar library, to see how the two compare.

Formik is a library that assists developers in three areas of writing React code: getting values in and out of form state, validation and error messages, and form submission.

Let’s look at both libraries on npm trends to gage popularity and community size. We see that over the last six months, Formik has obtained a higher number of weekly downloads than React Final Form.

On GitHub, React Final Form has 6.6K stars, while Formik has 27.7K stars. Formik clearly has a larger online community, however, there are plenty of threads and forums for both libraries, meaning you should be able to receive community support.

As seen in the screenshot below, both libraries are updated frequently:

React Final Form currently has fewer open issues on GitHub than Formik, but this may change in the future if the library grows in popularity.

Below, we can see the bundle composition for both libraries. React Final Form has fewer dependencies, reducing the chance of the library breaking up when updated.

Let’s test React Final Form’s functionality by starting our own project. Set up a React project and install the React Final Form library by running the following command:

Note that in the code snippet above, we import two components, Form and Field. Form is the parent component that takes all the props for the management of our form, and Field wraps the HTML elements to create a standalone Final Form component. The component created by Field has its own state that is managed by the Form tag.

Let’s write the code for a simple input form in React Final Form. Our code contains input fields for firstName and lastName. We also add a submit button:

Starting the server gives us the following output.

Note that Form only rendered once. The Field component shows independent behavior because it renders the same number of times as the number of characters entered. In React, we should always aim for a smaller number of re-renders to avoid delays as our form size grows.

We used a render prop, which gives us access to different props from the Form component. See the final output of our example below:

As before, we’ll set up a simple form with a field for firstName a field for lastName, and a submit button. Let’s call our form Client Profile:

On the first render, our form looks like the image below:

We’ve placed a log inside the Form tag that will keep track of the renders. Let’s enter Sam in the input field. We get the following output:

Note that the form re-rendered a total of nine times when we entered an input value, as opposed to React Final Form’s single render. Let’s consider these examples in depth.

In React Final Form, the Form component takes the subscription prop, which implements the observer design pattern and causes fewer renders. The subscription prop is similar to the useEffect Hook because it watches the values that have been passed to it and re-renders whenever they are changed.

In the Formik code block above, we do not have passed values inside the prop. Instead, Form is watching {submitting || pristine} for changes.

Formik has a similar mechanism for validation using a validationSchema. Therefore, both libraries are equal in this regard.

React Final Form’s paradigm for handling forms is different than other libraries. It handles the re-rendering problem of different libraries efficiently by using the observer design pattern.