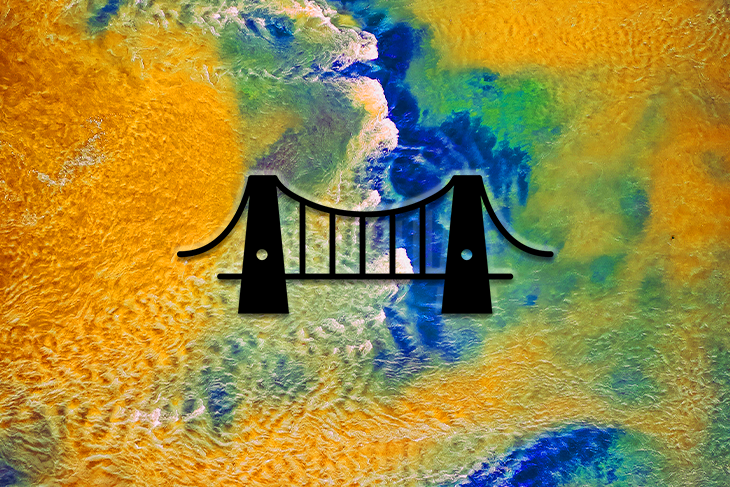 As the blockchain community grows, there have been limitations in inter-network communication and data exchange, calling into question the concept of decentralization, as blockchain networks are designed to be run by millions of stakeholders rather than a centralized body. This has also resulted in a lower adoption rate because applications developed for one network only work on that network.

Various projects have been developed over time to connect networks, allowing for the easy flow/exchange of data from one network to another while also increasing the adoption rate.

In this guide, we’ll take a deep dive into how blockchains communicate, share data, and transfer assets.

What is a blockchain bridge?

A blockchain bridge (otherwise known as a cross-chain bridge), like a physical bridge, connects two points. It facilitates communication between two blockchain networks by aiding in the transfer of data and digital assets. Both chains may have distinct protocols, rules, and governance structures, but the bridge provides a safe means for both chains to interoperate (i.e., communicate and share data). Blockchain bridges can be designed to interchange any sort of data, including smart contract calls, decentralized identities, off-chain information like stock market price feeds, and much more.

Every blockchain is created in a protected ecosystem with its own set of rules and consensus protocols, resulting in limitations for each blockchain. As a result, there is no direct communication or token transaction between blockchains. Blockchain bridges, on the other hand, enable the transfer of tokens and information from one chain to another.

Developers creating DApps on the Ethereum network have often had a negative experience due to slow transaction processing rates and high gas fees, particularly during periods of high traffic and congestion. However, blockchain bridges enable those same tokens to be processed on other blockchains faster and at a lower cost. Developers from different blockchains continue to work together to create new user platforms.

Cross-chain technology also contributes to market stability by reducing monopolization by major entities. Bitcoin and Ethereum, for example, are the most popular cryptocurrencies, accounting for more than 70% of the overall market share. As a result of this domination, there is little room in the market for new companies to test their tactics and get a foothold in the present competition.

How do blockchain bridges work?

Let’s consider an example with two blockchain networks: Chain A and Chain B.

When transferring tokens from Chain A to Chain B, the bridge can be designed to lock the token on Chain A and mint a new one on Chain B. In this scenario, the total number of circulating tokens remains constant but is divided across the two chains. If Chain A held fifteen tokens and then transferred five tokens to Chain B, Chain A would still have fifteen tokens (with five tokens locked), but Chain B would have five more.

The owner of the minted tokens can redeem them at any time; they can burn (or destroy) them from Chain B and unlock (or release) them on Chain A. Because Chain A has always possessed a locked copy of each token, its value remains consistent with the Chain A market price. This “lock-and-mint” and “burn-and-release” procedure ensures that the quantity and cost of tokens transferred between the two chains remain constant.

What are some different types of blockchain bridges?

Blockchain bridges can be classified into two categories: trust-based bridges and trustless bridges.

Trustless bridges are decentralized bridges that depend on machine algorithms (i.e., smart contracts) in order to operate. This type of bridge works like a real blockchain, with individual networks contributing to transaction validation. Trustless bridges can provide users with a better sense of security and also more flexibility when moving cryptocurrency.

What are some different cross-chain solutions?

Let’s look at some specific examples of blockchain bridges.

The Wrap Protocol, which as of this writing will soon be rebranded as the Plenty Bridge, can be used to transfer ERC20 and ERC721 tokens between the Tezos network and Ethereum, Polygon, and BSC. The Tezos blockchain uses validating nodes known as bakers to implement its proof-of-stake consensus algorithm.

The Avalanche Bridge (AB) can be used to transfer assets between the Avalanche proof-of-stake blockchain and Ethereum. According to the documentation, an Avalanche transaction on AB will take a few seconds, while an Ethereum transaction may take up to 15 minutes.

The Stargate Bridge (AB) is a LayerZero-based protocol that facilitates the exchange of native assets between blockchain networks. Users can send native tokens straight to non-native chains without the use of an intermediary or wrapped token. Stargate is designed to provide instant guaranteed finality, cross-chain interoperability, and uniform liquidity.

Zeroswap (AB) is a cross-chain decentralized protocol that attempts to facilitate zero-fee and gasless transactions. Zeroswap also intends to provide seamless access to multichains like as Ethereum, Polkadot, and BSC. Every transaction generates rewards from liquidity mining.

How do blockchains communicate?

Interoperability refers to the capacity of blockchains, which share the same underlying architecture, to communicate with one another in order to facilitate information sharing. It is the capacity to observe and access data stored in another blockchain. With interoperability, when information is delivered to another blockchain, a user on the other side may access it, and react effectively.

Asset exchange and asset transfer are the most common forms of cross-chain implementation. Both are essential aspects of the blockchain world and a crucial study focus for PPIO (Peer to Peer Input Output).

What are the different types of blockchains?

Depending on the underlying technology, cross-chain communication may be classified as follows:

Cross-chain development continues to grow in complexity, due in part to the growing number of blockchains and the differences between the chains. The majority of these issues are due to inconsistencies between chains. Cross-chain technology must try to accommodate these differences.

Interoperability between blockchains is very important, especially as the technology brings the current centralized operating paradigm (e.g. traditional banking) to the blockchain platform. It has the potential to change the way people operate

Cross-chain technology can help the DeFi ecosystem evolve and transform by resolving the flaws of centralized approaches (e.g., high costs, scalability, long transaction times). It may hasten the development and adoption of blockchain technology, opening the path for new financial systems based on interoperability across existing blockchain systems.

One practical implementation of cross-chain technology is sidechains. Let’s take a closer look.

A sidechain, or child chain, is a secondary blockchain that is linked to the main chain, or parent chain, allowing assets to be exchanged at a fixed rate between the parent and sidechain. Sidechains can also be thought of as protocols that enable tokens and other digital assets from one blockchain to be safely utilized on another blockchain and then returned to the original blockchain if necessary.

Let’s say a user wants to transact tokens from the parent chain. The user must first transmit their tokens to an output address. The tokens are temporarily locked and unavailable for spending. Once the transaction is complete, a confirmation is sent across the chains, followed by a waiting period for further security. After the waiting period, the corresponding number of coins is released on the sidechain, where the user may access and spend the coins. When transacting from a sidechain to the main chain, the process is reversed.

Miners and validators are required for proof-of-work and proof-of-stake sidechains, respectively. With proof-of-work models, miners can be rewarded through merged mining, which involves simultaneously mining two different cryptocurrencies based on the same algorithm.

To facilitate transactions without the usage of third-party connections, each network has a unique approach for blockchain interoperability. Here are some techniques for isolating transactions over several chains:

Atomic swaps are exchange facilitators that allow two parties to transfer tokens across several blockchains. This type of method does not necessitate the use of a centralized third party to enable deals. Instead, it enables users to exchange tokens on a peer-to-peer basis. This isn’t perfect cross-chain communication, but it is a system in which transactions are performed between chains.

Relays allow blockchain networks to monitor transactions and events occurring on other chains. Relays operate on a chain-to-chain basis, without the participation of dispersed nodes, allowing a single contract to serve as a central client for other nodes on many chains. In this way, relays can validate the whole history of transactions as well as certain central headers on demand. However, some relay solutions, such as BTC Relay, necessitate a significant expenditure in order to run and provide operational security.

Merged consensus approaches are robust and provide two-way interoperability between chains through the relay chain. The Cosmos and Ethereum projects make use of merged consensus. Merged consensus is fairly powerful, but it is usually necessary to build it into a chain from the start.

Federations allow trustworthy groups to validate occurrences on one chain on another. This is also a robust approach, but it relies on third parties or mediators, which can be a limitation in some cases.

Stateless simplified payment verifications (SPVs) are less expensive to run compared to relays, and smart contracts can validate a portion of the proof-of-work genesis history. This approach was originally conceptualized by the now-defunct Summa.

Stateless SPV operates by sending only the transaction’s necessary headers. The receiving chain does not have to keep a complete record of headers, which greatly reduces storage needs. This approach is solely applicable to PoW systems. It assumes that the amount of work necessary to construct a sequence of acceptable headers proving a fraudulent transaction exceeds the transaction’s value. A fraudulent transaction is defined as one that did not occur on the origin chain.

As part of the proof-of-work consensus, the origin chain generates sequences of headers for free for honest transactions.

What are the biggest challenges for cross-chain applications?

Despite the importance of blockchain interoperability, cross-chain systems may face some challenges when transacting assets or data from one chain to another.

One such challenge is transaction rate bottlenecks. This potential technical issue can hinder large-scale blockchain interoperability by blocking a single chain’s throughput capacity when it receives transactions from many chains.

A second challenge is disparity in trust. The trust system varies from one blockchain ledger to the next. Transferring data from one blockchain to another that has a greater or lesser number of miners or validators could result in third-party tampering of the ledgers or other issues.

Blockchain technology has the potential to improve a variety of information systems. But, the basis for its widespread adoption lies squarely with the evolution of cross-chain technology.

In this article, we investigated the topic of blockchain interoperability, reviewed the benefits of blockchain bridges, examined how blockchains communicate and share data, and discussed some of the challenges for cross-chain applications.