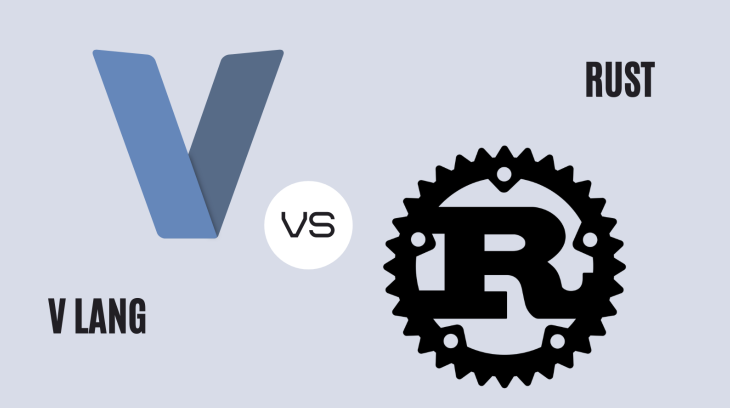 Vlang or Rust? How are they different from each other? How do they compare in their performance, memory management, compilation speed, and other important functionalities?

In this article, we will explore the answers to all of these questions as we compare Vlang (referred to as “V”) and Rust based on a variety of key attributes.

Rust is a statically and strongly typed language designed to build reliable and efficient software. V, on the other hand, is a simple language that enables building maintainable and predictable programs.

Although widely known for its safety and concurrency, Rust also guarantees fast performance and compile-time memory management. Rust therefore avoids some of the drawbacks — like data races and crashes — of other systems languages like C++.

A newer player in the game, V is a compiled programming language that promises high-performance features for simple, readable, and maintainable code. It is very similar to Go and Rust, and also has a few similarities with Swift and Oberon. Better yet, it also supports C code translation to V (with C++ translation features in progress).

The first stable release of Rust dates back to May 15, 2015. Rust has been voted five times as the most-loved programming language by developers in Stack Overflow’s survey. On the other hand, V is a relatively new programming language that has been gaining rapid popularity due to its impressive performance, innovative memory management, and C/C++ translation promises.

Although V and Rust share some common features, their programming approach is radically different from each other. This is to be expected; they have each been developed to target different use cases, which will discuss in more detail in the sections that follow.

A global variable is a variable with global scope, meaning that it is integral to the whole program.

On the other hand, V was built to enable building maintainable and predictable software and is widely known for its strict approach, so it does not allow global variables at all. There is also no null or undefined in V.

By default, then, if you’re looking to use global variables, you should use Rust over V.

The way a programming language handles memory management matters greatly. Both Rust and V guarantee compile-time memory safety, however, their way of dealing with this is quite different by comparison.

Unlike many other programming languages that use a garbage collector, Rust ensures memory management via ownership and borrowing rules (also called lifetimes). These rules can be pretty hard to wrap your head around at first.

V takes a different approach, using its auto-free engine which adds necessary free calls implicitly at compilation. This simplifies the memory management process significantly. Check out the demo in the video of V’s compile-time memory management below:

In addition to the standard types available in Rust(boolean, numeric, textual, etc.), there is also an option type. This type can either contain a value or not contain any value (and therefore be none). Result and option types are very commonly used in Rust, but it can be difficult to understand these types and use them effectively.

In V, the process is very simplified. A ? can be used in place of a function’s return type, letting it either return a value, an error, or a none. Thus, V combines option and result type into ?. With this functionality, error handling is also a lot easier to tackle.

Take a look at the use of ? in the sample code below, taken from the V docs:

In Rust, you must explicitly choose between value, reference, ref-counted, atomic-ref-counted, and a few other types before passing it to a function.

In the example below, you can see how V gives you the freedom to pass an immutable function argument (like foo) either by value or by reference:

Compared to V, Rust is a more all-purpose language that supports a wide variety of features, including support for Lambda expressions.

Sticking to its strict and simplified approach, V has very minimal support for Lambda and Lamda-like syntax, and does not allow Lambda expressions for more than one parameter.

V has no support for things such as null, global variables, undefined values, variable shadowing, or bounds checking. It offers highly safe functionalities such as option/result types, generics, immutable variables by default, pure functions, and immutable structs. Given this, V is considered to be an exceedingly type-safe and memory-safe language.

Rust, by comparison, still allows a few features (even though it highly discourages their use); these include, for example, the aforementioned global variables and unsafe Rust, which should be used selectively.

As all of us in programming know well, performance is an essential factor of using any language.

V’s official documentation claims that it is as fast as C, with the least amount of allocations and an in-built serialization without any run-time reflection. Moreover, V claims compilation performance of around 80k (Clang backend) and 1 million (x64 and tcc backends) lines of code per second per CPU core.

Not that Rust is slow — Rust offers great compilation speed as well. However, compared to V, Rust has a ways to go in reaching the outstanding speeds now available in the marketplace.

Both Vlang and Rust are top-notch languages for building software. They are modern, compact, powerful, high-performance languages with great support for compile-time memory management. Each programming language is deliberately optimized for different things.

As is often the case in programming, the choice of language entirely depends on what you’re working on and what problems you are trying to solve. Both first-class in their own ways, V and Rust are worth the time and effort you will invest in learning these languages in your journey as a developer.

Shubham Kumar Follow Software artist and internet cowboy!
« React is a black box. Why does that matter?
Creating compound components in React and Angular »