Using Prettier and ESLint to automate formatting and fixing JavaScript 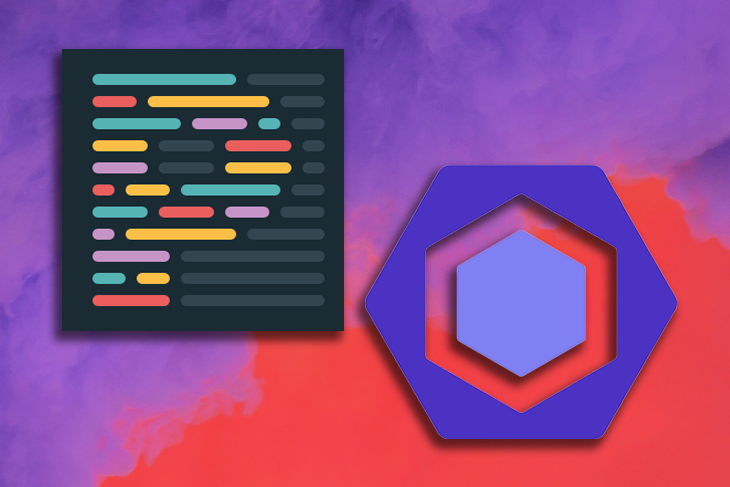 Editor’s note: This post was updated on 11 February 2022 to correct any outdated information and add the Prettier vs. ESLint section.

Linting and pretty-printing JavaScript code can help developers catch errors early, make code more legible, and improve overall code quality. However, when using a formatter for pretty-printing and a linter side-by-side, there can be some friction.

For example, the formatter might do something that the linter deems problematic. The linter can then overwrite style changes from the formatter, causing the two to pull in different directions.

To use them together successfully, developers must get them on the same page. In this article, we’ll discuss how to use the popular formatter, Prettier, with the popular linter, ESLint.

We’ll learn how to set them up and use them together on the command line and in Visual Studio Code (VS Code) to automatically fix and format code.

I have seen different methods for tackling how to use them together, but some are hacky solutions because of limitations in code editors. So, I will discuss the pros and cons of some of these, and you can make your own decision on what is best.

First, let’s get a clear understanding of what ESLint and Prettier do, and highlight how they differ.

Prettier is an opinionated code formatter for JavaScript and other popular languages. Prettier enforces a consistent format by parsing code and reprinting it with its own rules that take the maximum line length into account, wrapping code when necessary.

This rewriting process prevents developers from introducing any formatting mistakes.

The primary reason Prettier was created was to eliminate debates over code styles. The idea is that Prettier’s style guide is fully automatic. Even if Prettier does not format your code 100% the way you like, it’s worth the sacrifice for the simplicity of the approach.

While a big reason to use Prettier is to avoid configuration altogether, Prettier does support its own configuration file that has a handful of formatting options.

So, why are there any options at all?

It is mostly due to historical reasons. A few were added during Prettier’s infancy to entice more people into using it, a couple of options were added due to demand, and some rules were added for compatibility reasons.

The bottom line is that the development team intends to never add more options from now on; you can read more about this in Prettier’s Option Philosophy.

Linting is a type of static analysis that finds problematic patterns and code that doesn’t adhere to certain style guidelines.

Since JavaScript is a dynamic and loosely-typed language, it is especially prone to developer errors. Without the benefit of a compilation process, JavaScript code typically executes to find syntax or other errors.

However, ESLint enables developers to discover problems with their code without actually executing their code.

The primary reason ESLint was created was to allow developers to create their own linting rules. ESLint has built-in rules that make it useful from the start, but you can add rules specific to your project and whatever flavor of JavaScript you use.

Many people have done the heavy lifting for you by creating shareable configs, which have rulesets for popular JavaScript frameworks and common style guides/coding standards such as Google’s JavaScript Style Guide.

You can find some of these shared configs on npmjs.com by searching for “eslint-config” (the naming convention for shared configs).

ESLint has a pluggable architecture that enables creating plugins, which can add extra capabilities to ESLint, and gives a new baseline to add your own custom rules.

An example of this is eslint-plugin-vue, which is the official plugin for Vue.js. This plugin allows us to lint the <template> and <script> sections of .vue files, as well as Vue code contained in .js files.

In a dedicated ESLint configuration file, you can manage the rules your project uses and disable any you don’t wish to use. ESLint allows rules to be set as errors or warnings and some errors can be automatically fixed.

Differences between ESLint and Prettier

In summary, these are the major differences:

Are you still wondering why bother using both?

In a nutshell, you will use Prettier to simplify the formatting of your code and ESLint for catching bugs.

There are two broad categories of linting rules: formatting rules and code-quality rules.

Formatting rules are the rules that affect the style of the code and are not concerned with bugs. For example, the rule no-mixed-spaces-and-tabs rule in ESLint ensures that only tabs or spaces are used for indentation.

Prettier has a tabs option for the same thing.

Name collisions can occur with global variables created from other scripts, which usually leads to runtime errors or unexpected behavior. 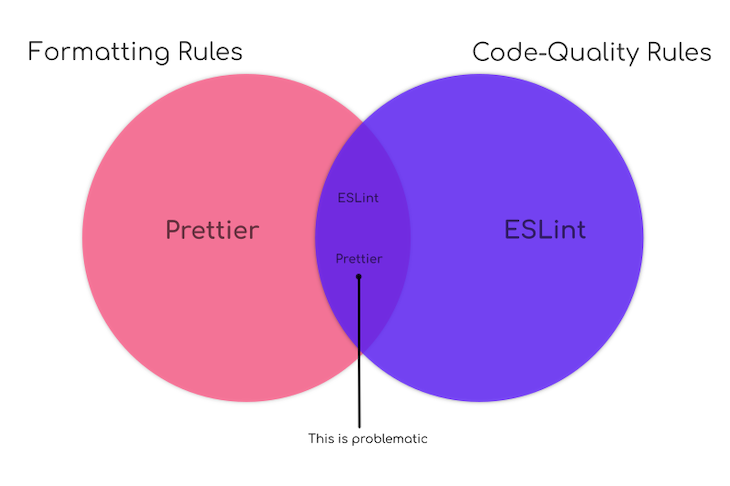 The problem is that the rules of Prettier and ESLint overlap, and we prefer that they don’t!

Generally, we want Prettier to handle the first category and ESLint to handle the second. There are rules that may be difficult to categorize as one or the other; we don’t need to be pedantic about which category they fit into.

Our interest is in ensuring that either Prettier or ESLint perform a particular action and do not bump into one another. 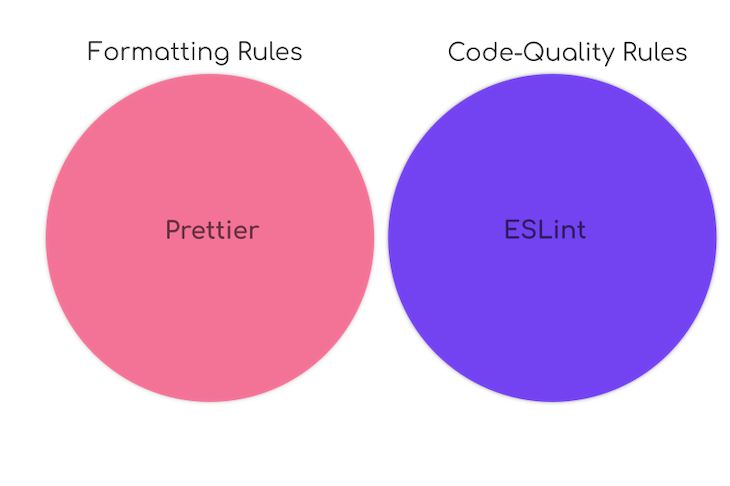 As for the order to run them in, it is generally best to run Prettier before ESLint because Prettier reprints your entire program from scratch. So, if you want to let ESLint in on the formatting act, you should run it after Prettier to prevent the changes from being overwritten.

If you’re not familiar with ESLint and Prettier, let’s cover how you can configure and use them in the next section.

Both ESLint and Prettier are available to download from npm and Yarn. For every project, you must create a package.json and add them as devDependencies:

ESLint starts as a blank slate. It won’t do anything until you create a configuration with some rules. You must put the configuration file, .eslintrc.{js,yml,json}, into the project directory and you’ll be ready to lint.

You can create the configuration on the command line with the following commands:

Note that npm init @eslint/config assumes you have a package.json file already. If you don’t, you can run npm init or yarn init to create one.

This command will lead to a wizard with a series of questions to establish what it is you want to lint, such as module type, framework used, where your code runs, and so on. It will spit out a configuration file and install any related dependencies for you.

If you just want to use the built-in recommended rules, you can simply add eslint.json like so:
<

With a configuration in place, you can run ESLint on any file or directory. For example, here I am linting my src directory:

As you can see in the screenshot above, ESLint outputs a list of problems with the details: location of error (formatted as <line number: character number>), type (error or warning), a description, and the rule name. You can read ESLint’s Getting Started Guide for more details.

On the other hand, Prettier has a default configuration. It can run without creating a configuration file, so you can begin using it straight away. The recommendation is to use a specific version of Prettier on big projects, otherwise updates may cause changes to files and add noise to your git commits.

You should also use a .prettierignore file to ignore things that should not be formatted. You can read Prettier’s installation guide for more information.

A typical package.json will look something like what is below. Here, we target the files in the folders src and test for the npm scripts.

I prefer to skip .eslintignore and .prettierignore files if possible — simpler is preferable! 😅

All the major code editors have extensions for ESLint and Prettier. For VS Code, the official extensions are Prettier – Code formatter and ESLint.

Methods for linting and pretty-printing your code

This method is the cleanest and most efficient, and the best recommended to use.

It’s easy to turn off rules that conflict with Prettier in ESLint by using the following configs:

First, install the config for JavaScript:

Then, append that config name to the extends array in your local .stylelintrc.* ESLint config file. Make sure to put the Prettier config last so it overrides the settings from other configs.

Here is an example .eslintrc.json:

Now, you can run the npm run format command to format and fix all your code in one go.

To use with VS code, install the extensions: ESLint, Prettier, and Format Code Action, and update your user settings (settings.json), as shown below:

First, you need to disable the editor formatting on save (editor.formatOnSave); we want to handle everything through code actions.

In March 2020 (v1.44), the editor.codeActionsOnSave property was updated to accept an array of code actions, which permits ordered code actions. If we install the Format Code Action extension, we can make formatting available as a code action.

So now, we can run Prettier and ESLint as code actions in whichever order we like. Sweet!

In this example, we run Prettier first with the action source.formatDocument (it uses the default formatter), and then we run eslint --fix with the source.fixAll.eslint action.

The eslint.probe property target the languages that ESLint should validate. You can use eslint.validate if you want to see pop-up messages instead.

If you use the Vetur extension, ensure it does not do its own validation. There is a setting vetur.validation.template, which you should not enable.

First, install the package. This is just for JavaScript:

Next, write your own implementation to target your files and run the formatting.

Below is a basic example of formatting a string:

Obviously, this method requires more work to target the files, read the content, and write the output.

To use in VS Code, you can install and use the Prettier ESLint extension.

Run Prettier as an ESLint rule

This is generally not recommended because:

You can use ESLint plugins that let you run Prettier as if it is a linter rule:

First, install the plugin. This is just for JavaScript:

Then, append the plugin(s) to the plugins array in your .stylelintrc.* file, for example in .eslintrc.json:

Wes Bos recommended this method a few years ago. It was probably the best option at the time, but there are more options available now.

To configure for VS Code:

Prettier and ESLint can be used together very effectively. It requires some configuration, but that should be straightforward after reading this article!

Personally, I love having this setup. It’s great to have some tasks taken off your hands and reclaim some headspace. It will help you to improve your code quality and give you a more legible codebase without manual intervention.

Rob O'Leary Follow Rob is a solution architect, fullstack developer, technical writer, and educator. He is an active participant in non-profit organizations supporting the underprivileged and promoting equality. He is travel-obsessed (one bug he cannot fix). You can find him at roboleary.net.
« Implementing React Native biometric authentication with Expo
Flutter form validation: The complete guide »