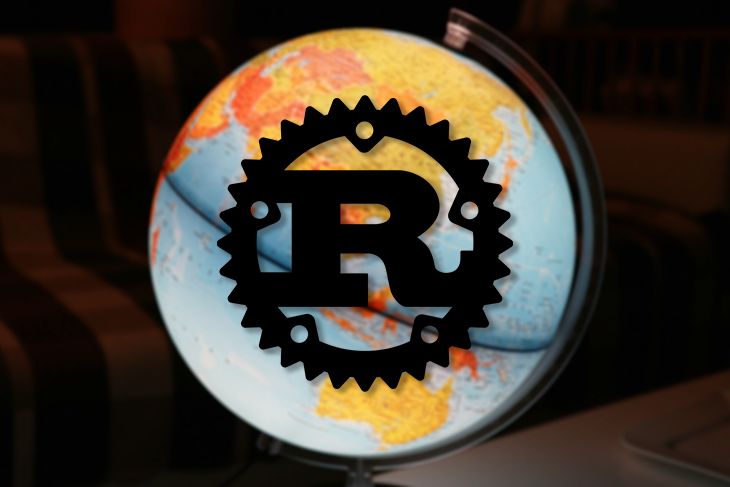 Over the past few years, Rust has gained in popularity as businesses increasingly look to promote their products and services on the world stage. According to Stack Overflow’s “2020 Developer Survey,” a whopping 86 percent of respondents who have used Rust plan to use it again, making Rust the most-loved programming language of 2020.

Internationalization (i18n) is a key consideration for companies planning to roll out their apps and software to a global audience. In this Rust internationalization tutorial, we’ll examine eight of the most popular Rust i18n crates and evaluate each for production-readiness and stability.

In this guide, we’ll look at eight of the most popular Rust internationalization crates and evaluate each for production-readiness and stability.

Internationalization is sometimes abbreviated as i18n because there are 18 letters between the initial “I” and the closing “N.”

Before we proceed with our Rust internationalization tutorial, let’s define some key terms:

Why use internationalization with Rust?

In the era of static websites, localization is done by copying the whole site structure in multiple locales. Changes are made to each structure directly by the translator because each page is translated separately. Internationalization tools streamline this tedious, time-consuming, error-prone process.

Among Rust’s most enriching features is the language locale, which makes it easy to translate an app to various languages.

In general, there are three common localization systems:

Let’s examine each in more detail.

gettext is a localization system that separates translation files from the programming language and provides support for plural forms strings of any number. Sun Microsystems implemented the first version of gettext in 1993. In 1995, the GNU project released a free software implementation. Since then, gettext has been used by many programming languages, including Rust.

Here’s how to use gettext: 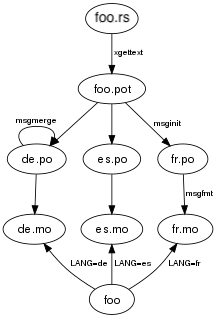 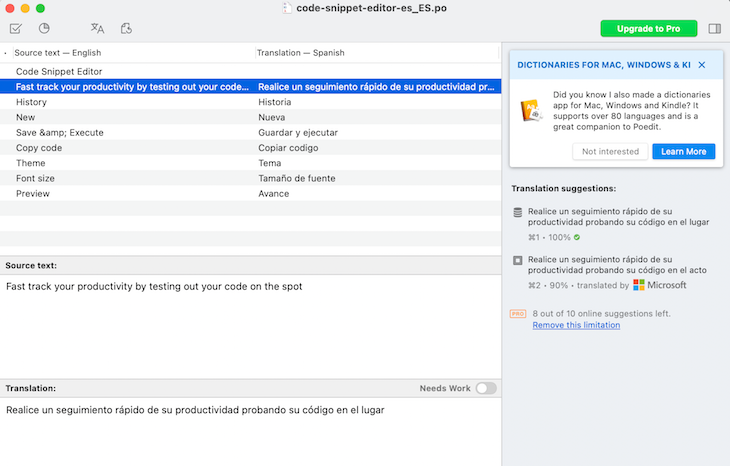 Fluent is a translation system that focuses on producing natural-sounding translations by providing support for grammar expressions such as gender, plurals, conjugations, etc.

Fluent uses an expression from a file format called FTL (short for Fluent Translation List) to process translations. An FTL file represents a language that contains functions, attributes, variables, selectors, terms, etc. Each locale must have its own FTL file created in different locale directories with its own translations following the same syntax pattern.

Let’s zoom in on eight of the most popular Rust internationalization APIs and compare their production-readiness, stability, and the overall developer experience.

Fluent is designed to improve the process of translation on platforms. It enables syntax operations, parsers, and core localization structs to use a low-level structure for formatting and storing messages in a single locale.

Fluent LangNeg is based on fluent-langneg, a JavaScript library implementation associated with Project Fluent, which was formerly called fluent-locale. It uses unic-langid and unic-locale to retrieve and operate on locale identifiers. Fluent LangNeg also provides option for negotiating between different locales lists.

Rust gettext is based on GNU gettext, which is supported and modeled for vast number of languages such as php-gettext, gettext-go, js-gettext, and more. It stores the translated data in a .mo file, which is separated from the language files because it does not enforce directory structure for storage.

At the time of writing, this crate is still in the development stage.

gettext-rs uses the GNU Gettext FFI binding for Rust to build script execution based on environment variables. It currently has support for only Linux and Windows.

r_i18n is a tool that translates string by accessing a string’s related key-value pair from the JSON file created for each languages in a configuration directory.

json-gettext extracts strings from a JSON locale file to get a user’s catalog. The localization works by creating different JSON locales in a directory that has to be accessed by Rust.

i18ncodegen is closely related to ri18n, which generates new code snippets based on the key-value pair specified in each JSON locale. The key in the JSON file becomes a method that can be accessed via implementation. This procedures is designed to help you avoid common bugs such as missing interpolations, i18n keys typos, etc.

rocket_i18n8is designed to translate locale based on user request on rocket or actix web frameworks via i18n macro. Rocket I18N was built to support only compiled templates, such as the rcute and Askama template engines.

With these internationalization APIs, you can extend your business to other regional demographics, which could help boost overall user engagement with your Rust app.

The best internationalization tool to serve your needs will depend on your particular use case and what you hope to accomplish with your app. Some of the APIs mentioned above are more production-ready and stable than others, so make sure you do your homework before committing to a solution.

Abiodun Solomon Follow I’m a software developer that is curious about modern technologies. I love contributing to the growth of knowledge for the betterment of humanity.
« Intro to ForgoJS, an ultra-lightweight UI runtime
Using flexbox in React Native »

One Reply to “Rust internationalization, localization, and translation”