What are release notes and how to write good ones 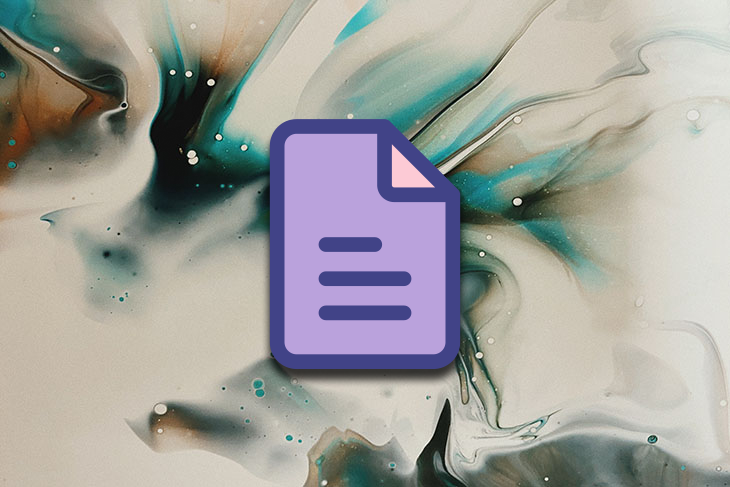 Although the brutal fact is that the vast majority of people don’t read them, release notes present a great opportunity to wow the niche that actually reads them.

In this article, I’ll cover the topic of external release notes — specifically those shared publicly with users. Let’s see how to write and distribute these effectively.

Their official goal is to inform users about recent changes and the content of the patches/updates. And roughly 90 percent of users don’t read them.

But for this remaining 10 percent — which isn’t that small after all — release notes are another touchpoint between them and your product.

The way you use this touchpoint contributes to your overall brand perception. Sadly, most products just bore users with facts. Although there’s nothing wrong with that, there are more interesting ways to convey information than just sharing dry facts.

Let’s take a look at some examples.

Citymapper proved that there’s an alternative to “minor bug fixes” back almost a decade ago: 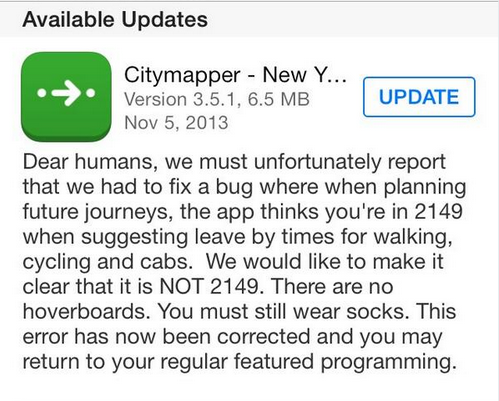 Although a bit wordy, combining humor with a little bit of storytelling made these release notes an exciting and memorable read.

First and foremost, even minor bug fixes might be presented in an interesting way.

“There are no hoverboards. You must still wear socks” — although these don’t convey any additional information, they fit the storytelling perfectly and make the read more captivating.

Slack took things a bit further. During the COVID-19 outbreak, they used the space solely as a communication touchpoint with users without giving any information about the release whatsoever: 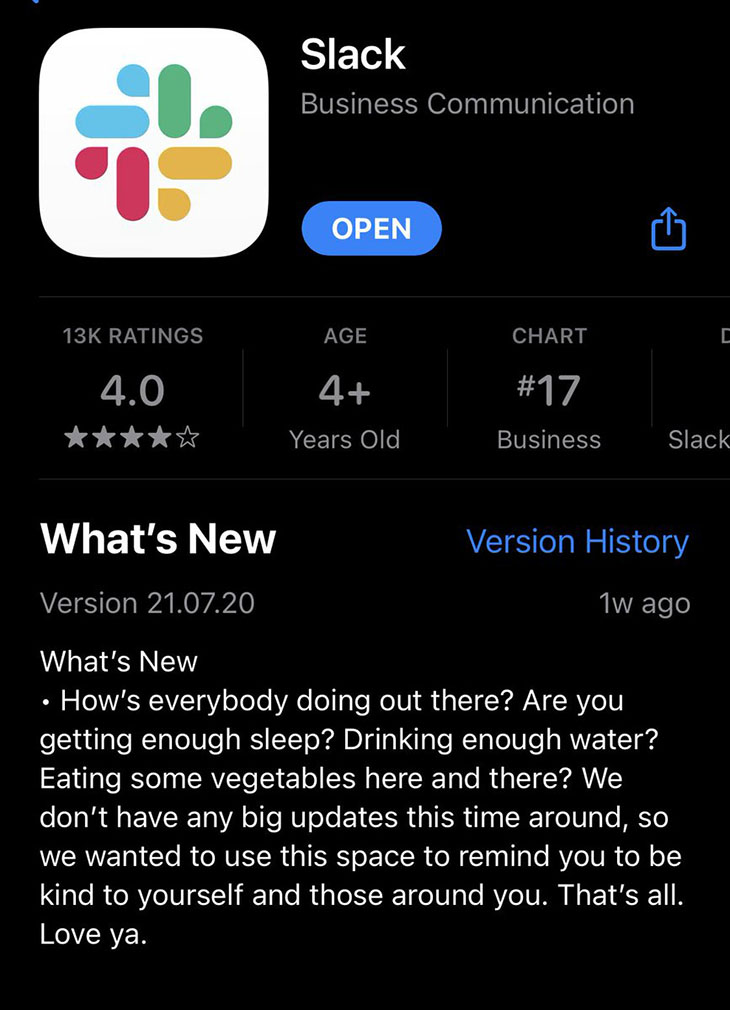 If you were one of these 10 percent of users who read release notes, it probably warmed your heart a little. And these notes went so viral that you probably heard about them even without reading them on the App Store, which further reinforced Slack’s brand.

Most importantly, release notes can act as an additional communication channel — something between push and e-mail.

It’s also possible to write release notes without actually informing users about the release content. But be careful, this works best for established brands.

Release notes don’t always have to be wordy. Let’s take a look at one of Medium’s release notes from 2015:

These release notes can be consumed very quickly while still staying in user memories for longer.

Well, sometimes one sentence is enough. A few words, like “fired Peter,” can differentiate between boring and memorable release notes.

Perhaps you prefer the old-school style of release notes, i.e., a bullet-pointed list of changes. That’s okay, but you can spice it up, too: 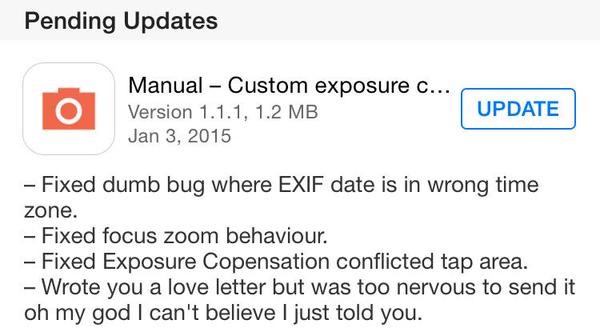 Manual made us laugh a few years back by slipping a love confession into their list of fixes one time. Just curious, who was the actual recipient?

Easily scannable and understandable release notes titles are magic. They: 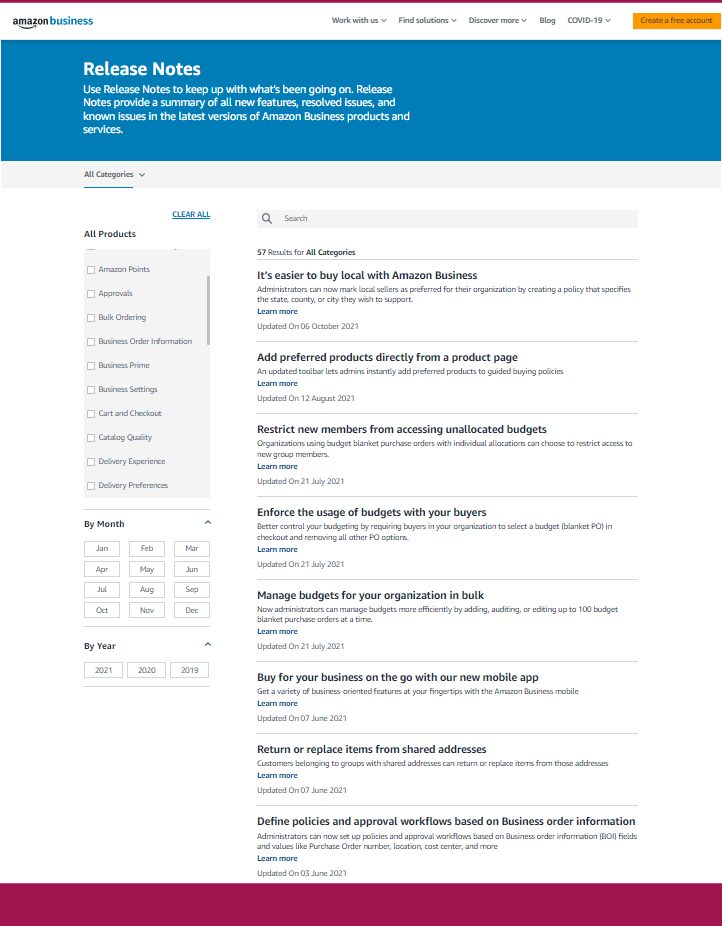 You don’t have to go deep into details to understand what’s happening on Amazon Business. After visiting their release notes site, you already know that a lot is happening for them. You can easily catch up on what you missed and dig deeper into topics you are genuinely interested in.

Well-written titles can help users catch up on months of updates. They also show a story of how the product is being developed.

All good, but what if you have a robust continuous deployment pipeline? Writing release notes every day is not scalable.

In this case, it’s worth simplifying and automating:

Release notes can be very generic — there’s no need to write something new every week, especially if you release often.

Writing release notes is one thing, but distributing them is a different story.

Although you can’t change the fact that most users won’t read release notes, you can make efforts to increase the number of people that actually read them.

There are a few reasons you might want to do that:

While release notes for mobile apps are distributed in stores automatically, there are many ways to increase the reach of notes for both mobile and web products.

One of the ways is to send users a push notification or some sort of in-app messages, such as a pop-up banner.

These have pretty high discoverability and are among the best ways to ensure users don’t miss a critical update.

A dedicated page containing all information about releases is a good way to organize and showcase all your hard work. It’s also a must-have for B2B products.

To make it more efficient, move traffic there from other sources (such as the pushes mentioned above). Few people organically search for release notes via Google.

Although you shouldn’t brag about every single bug fix on your social media channels, more interesting updates deserve some coverage there.

With some luck and well-written copy, you might even go viral.

Do you plan to release a game-changing update redefining the value of your product? That might be worth covering in the media.

You don’t have to buy a Super Bowl slot. Getting coverage on HackerNoon or some other internet publication is probably enough.

If you update your app every week, please don’t send an e-mail to your customers every time (although, in some rare cases, it might be acceptable). However, it’s still a viable communication channel worth using when you want to reach as many people as possible with some major updates.

Some updates might be worth communicating to customers directly. It’s mostly true for B2B products, especially if you deliver an update your key clients have been nagging you about for ages.

Consider using your sales force and account managers to proactively reach out to clients and inform them about major changes you just published.

Review all touchpoints you have with your end-users and determine if you can use them as a release communication channel.

For example, you could add a small section with the latest updates on your customer support portal.

Release notes, although often neglected, present you with an opportunity to wow your users and strengthen your brand communication.

Don’t use them just as a medium to convey facts. Think through how you can communicate your values, add some humor, or make your users smile. They’ll remember.

However, if you spend additional effort to write killer release notes, don’t forget the distribution part. You can triple the reach of your release notes if you include actually talking about them in your communication strategy.

Bart Krawczyk Follow Learning how to build beautiful products without burning myself out (again). Writing about what I discovered along the way.
« Using Medusa as a Shopify alternative
Build a draggable to-do list with React Native Draggable FlatList »

Why product-market fit is not enough: 4-fits framework