Intro to KubeVela: A better way to ship applications 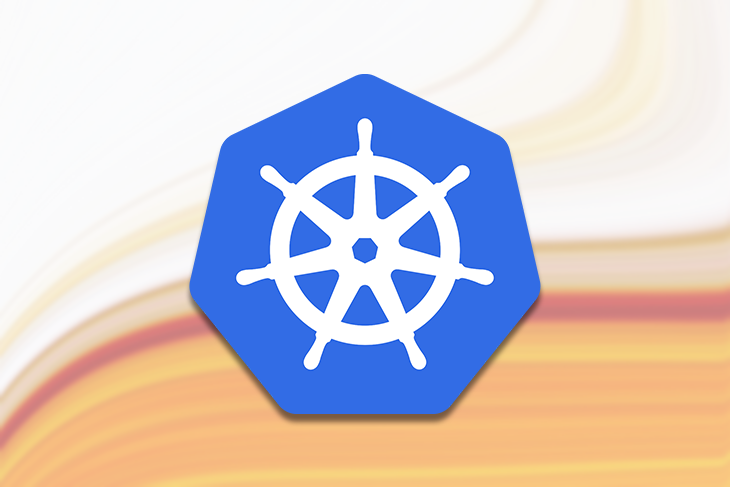 Kubernetes has already won the container orchestration battle. But the war developers still need to overcome with Kubernetes is its complexity. This is where KubeVela comes into play.

KubeVela makes deploying applications to Kubernetes much easier. Rather than knowing about service, deployment, pods, and horizontal pod scaling, you can specify a much lighter configuration. Let’s dive deeper on how.

KubeVela is an open source tool that abstracts away the complicated Kubernetes artifacts from developers — and, to a point, platform builders — to create a simpler deployment experience.

As a software engineer, Kubernetes artifacts can be overwhelming at first. This is where KubeVela acts as a much-needed bridge that allows developers to worry less about the underlying artifacts. KubeVela helps both developers and platform builders by providing a good framework that provides a user-friendly yet highly extensible platform.

Its tagline is “Make shipping applications more enjoyable,” and I think it lives up to that slogan. KubeVela is based on the Open Application Model (OAM) specification, which puts the focus squarely on the application rather than the container or orchestrator.

Where does KubeVela fit in the Kubernetes ecosystem?

Some of these useful tools include Helm, Skaffold, and Draft, to name a few. We can find a good comparison of these types of tools in this helpful post.

Still, none of these tools are geared towards both developers and platform operators in the same way KubeVela is. KubeVela gives a user-friendly and simple way to define applications that can be easily deployed and updated on any Kubernetes cluster.

In this demo, we will deploy a simple Node.js Express application that has already been dockerized, and the Docker image is available on Docker Hub.

Before jumping in and defining the KubeVela app file, let’s first clear up some prerequisites:

Let’s go ahead and set up our local Kubernetes cluster using kind. We’ll outline the steps below.

Set up a local Kubernetes cluster with kind

Depending on your operating system, you might have a different way to install the kind CLI. I am using a Mac, so I ran the following command:

You will be able to find your OS-specific command to install kind on its installation page.

Before proceeding, make sure your ports 80 and 443 are open on your local machine. This means you will need to stop any servers like Apache or NGINX occupying port 80. Also, check that you don’t have any other services taking up port 80 locally like an NGINX proxy, which could be running as a Docker container, too.

To create our local Kubernetes cluster with kind, we will execute the following command:

This creates a kind Kubernetes cluster with ports 80 and 443 from the container mapping to your local machine.

It should take a couple of minutes and come back with an output like below: 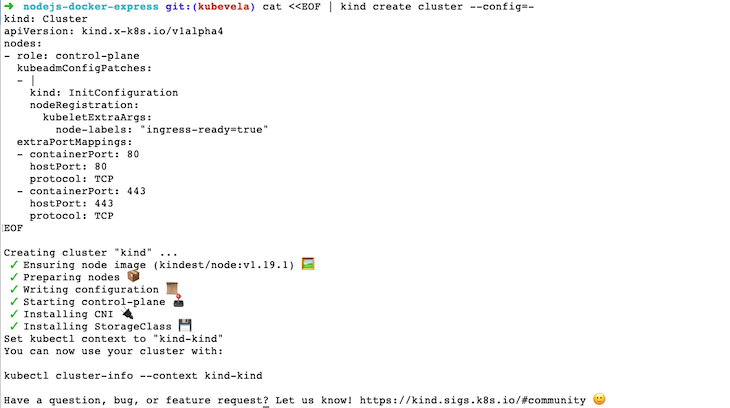 For the next step, we will configure our kubectl to use the Kubernetes cluster we just created by running:

Up next, we will install Ingress in our Kubernetes cluster with kind by running:

The above command will show us something like below:

To quickly check whether we have any pods running on the newly created Kubernetes cluster, we can run:

It will show us pods running on all namespaces like below:

Hurray, our Kubernetes cluster is up and running. The next step is to install KubeVela — let’s go.

Now that we have our kind Kubernetes cluster running locally inside a Docker container (try docker ps to check), we will proceed to install KubeVela. To install KubeVela with Helm, run the following command:

It will show us the following output:

To make things easier, we have clubbed together two commands. The first gets the Helm chart for KubeVela, and the second updates the help repo.

For the next step, we will again run two commands together:

These two commands show us an output like below:

As per the KubeVela installation documentation, KubeVela relies on cert-manager to create certificates for webhooks.

At this juncture, if we run kubectl get po -n vela-system to verify whether KubeVela is running properly, it will show us one pod whose name starts with kubevela-veal-core- running. Now we know that KubeVela is installed on our Kubernetes cluster and running successfully.

In the next step, we will install the vela CLI.

To install the vela CLI on a Mac I ran the following command:

Depending on your operating system, you can find the relevant command to get the CLI on this page.

To verify that your vela CLI is installed properly, run vela version, and you should see an output like below:

We will use the vela CLI to create a vela.yaml file that defines how the app should be deployed on Kubernetes. Time to play around with the vela CLI now.

‘Velaize’ and deploy our Node.js application

To try the demo app on your Kubernetes cluster, you can go to an empty folder and run: 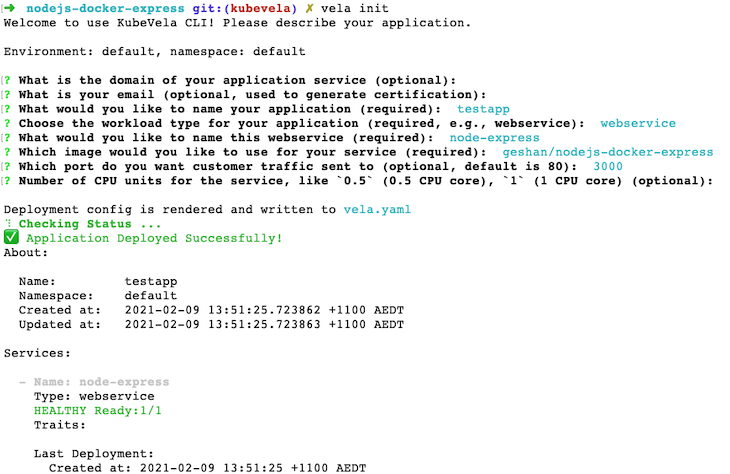 Our Node.js application will run on port 3000, and by default, the latest tag for the Docker image will be pulled in and deployed to Kubernetes by KubeVela.

Run vela status testapp to view the status of the app as follows: 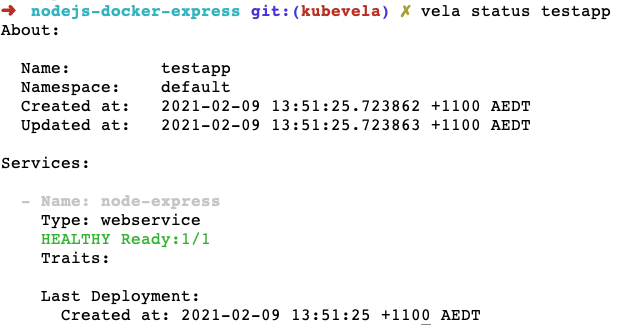 Another way to quickly check it is by running kubectl get po, which should show a pod running.

The vela init command has created a vela.yaml file with the following contents:

To test the Node.js Express app running on your local K8s cluster deployed with KubeVela, run the following command:

Deploy a change with KubeVela

Then, we will change the tag in the vela.yaml file, as below:

The change is adding the tag to the Docker image as image: geshan/nodejs-docker-express:kubevela. Given the tag is available, we can do:

There you have it! We ran a small Node.js Express app that had been previously dockerized on a local Kubernetes (kind) cluster with KubeVela. I think it was much easier than dabbling with service, deployment, and other Kubernetes artifacts.

The local Kubernetes cluster should be treated as your playground for the proof of concept. We can realize the ease and flexibility KubeVela adds when we want to deploy our containerized apps to production-grade Kubernetes clusters.

As this is an intro post, I decided not to dive deeper into the routing and auto-scaling parts. There are some alternative commands to add these capabilities, too. I would leave it up to you to explore these powers of KubeVela.

We have seen how to deploy a Node.js Express app to Kubernetes using KubeVela. KubeVela makes it easy and a lot more user-friendly to deploy any containerized application into Kubernetes. I would recommend trying KubeVela if you and your team are venturing into the Kubernetes landscape for its ease of use and flexible architecture.

Geshan Manandhar Follow Geshan is a seasoned software engineer with more than a decade of software engineering experience. He has a keen interest in REST architecture, microservices, and cloud computing. He also blogs at geshan.com.np.
« A complete guide to the Node.js event loop
10 best practices for REST API design  »