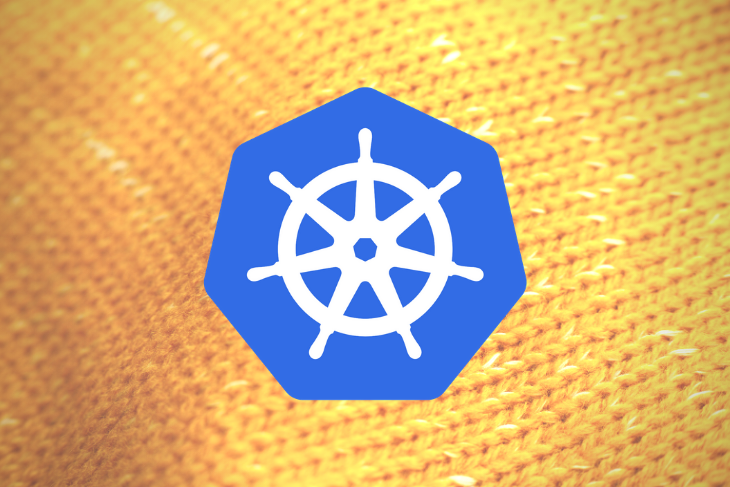 Managing software infrastructure is always a challenge. Kubernetes (also known as K8s) is an excellent platform that leverages containers to manage all stages of your project pipeline. It was originally an internal project at Google called Borg before it was made open source. Today, developers around the world use K8s with the backing of the open source community.

We’ll cover some tools you can use with K8s to both build and manage your infrastructure. But first, let’s define what Kubernetes actually is and quickly review the following topics.

Since many of these tools require having an existing cluster to work with, we’ll walk through a basic setup using the Google Cloud Kubernetes Engine (GKE) as well.

All code that is used in this post can be found in my GitHub repo.

Kubernetes manages applications that are deployed in containers. Containers provide mobility and fine-grained control over applications in all stages of the product lifecycle.

K8s itself operates with a control plane and worker nodes, as you see in the following diagram.

The elements within the worker nodes handle the actual running of the application. Each node contains pods where your application will run in containers.

All of this together forms a K8s cluster. Typically, you’ll have a master node that has the elements in the control plane, and then you’ll have worker nodes where the actual application containers run.

Two other terms you often hear when working with Kubernetes are deployment and service. Deployments refer to configurations that make up a cluster. This is normally in the form of a config YAML file, but there are other ways to create deployments using docker images and other resources. Services refer to an abstract representation of an application running in a container within a node.

To really see K8s tools in action, it helps to have a working cluster that you can interact with. In my GitHub repo, I’ve included both instructions for building a cluster with Google Cloud Kubernetes Engine and Minikube.

Once you have these set up, you can use these examples to test the tools I’ll cover in this article. It also helps to have kubectl already installed.

kubectl enables you to:

If you want to first create a cluster, you can apply a deployment via a YAML file, like this:

Once you’ve created a deployment, you can get the status of the clusters running.

Below are some other tasks you can accomplish with kubectl.

Get information about the pods in a cluster:

Create a service via a config file:

Get information about a service:

View logs within one of your pods:

There are a lot more options with kubectl. For more, check out the K8s cheat sheet.

As I stated earlier, a control plane is the part of K8s that manages a cluster’s worker nodes. In a larger application, you may have multiple clusters that need to be managed.

kubefed enables you to interact with the cluster (or clusters) from a higher level of federated control. This is particularly good when considering security options, such as setting up TLS for your clusters.

The following example command deploys a federation control plane with the name fellowship, a host cluster context rivendell, and the domain suffix example.com.

Some examples include adding a control plane with a cluster.

This example (copied from the K8s reference docs) deploys a federated control plane with the name of fellowship and context of rivendell. With kubefed, a host-cluster controls the rest of the clusters in your federated system.

kubefed works with kubectl and is very powerful. Refer to the K8s docs for more info.

Often while working with K8s, you’ll want to test something out on an individual pod before you apply it to an entire cluster. Minikube is a tool that allows you to build a one-node cluster on your local machine. Here you can test out what your nodes would look like with various configuration changes. The advantage is that you can easily create containers without being concerned about impacting a larger cluster.

Setting up Minikube will depend on the hardware you are using. The steps below work for a Mac, but you can check the docs for a more detailed walkthrough.

The first step to set up Minikube is to verify that virtualization is available on your machine.

Next, you’ll want to install it with brew.

Confirm installation with the following.

Once the console output finishes, you can verify that your cluster is working correctly with the minikube status. You should see something similar to the following.

Now that Minikube is installed, you can create a one-node cluster. You can either do this with images from a Docker registry or locally built images.

Note that Minikube runs entirely in a VM. When you stop Minikube, you are basically shutting down the VM.

To create deployments against your locally running Minikube, you can either pull a Docker registry image or use the local Docker daemon in your Minikube VM.

In my GitHub repo, I included a sample project in the minikube directory. The process looks like like this:

The cool part about this setup is that you can just use local images; you don’t have to actually push it into a registry.

Overall, the primary advantage of using Minikube is that you can experiment and learn without worrying about the confines of a larger system. For more information, check out my GitHub project and the K8s docs on Minikube.

To deploy the dashboard locally on top of your running clusters, just run the following with kubectl.

Then, run the kubectl proxy.

Next, you can access the dashboard via the following URL on your local machine:

You should see the following output. 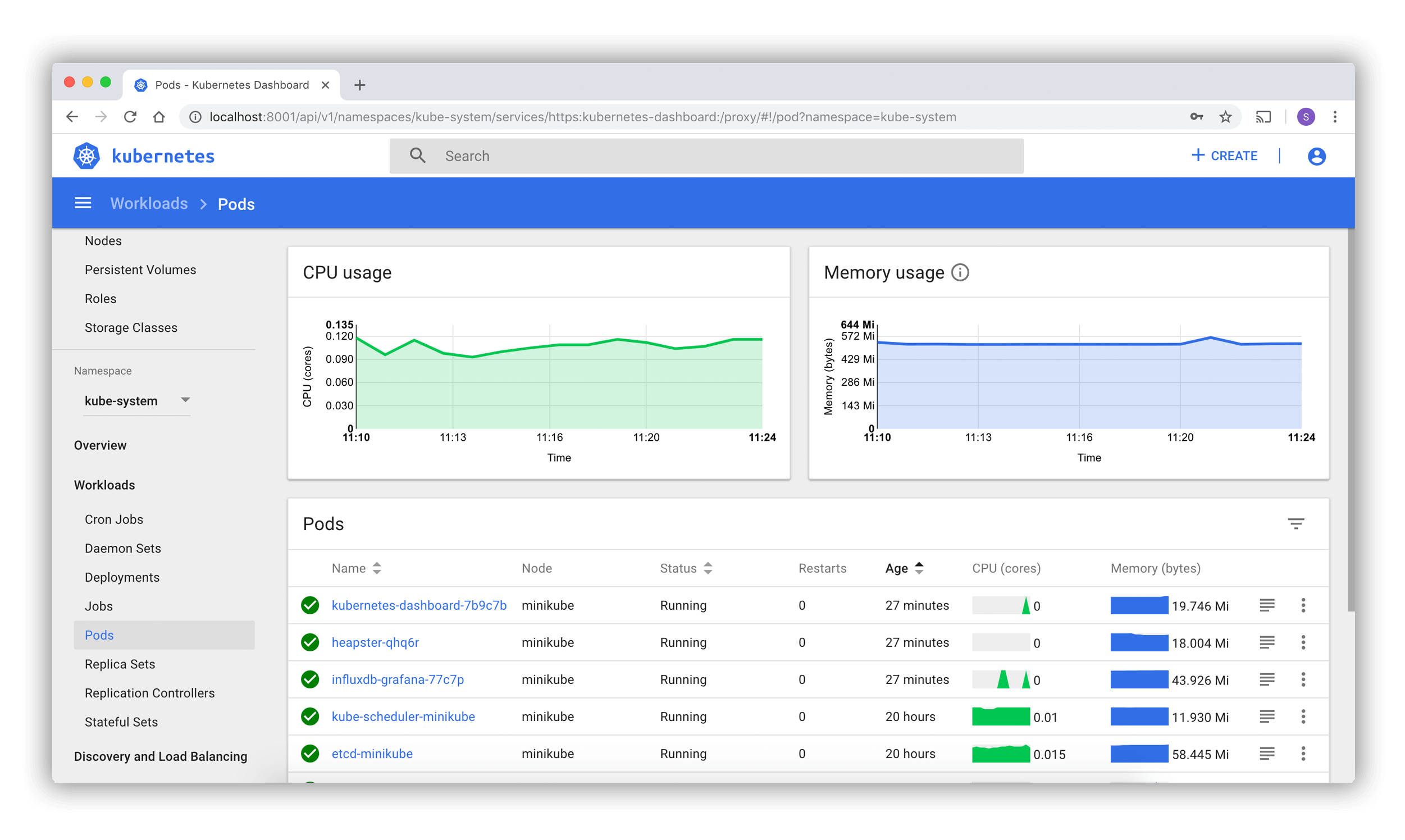 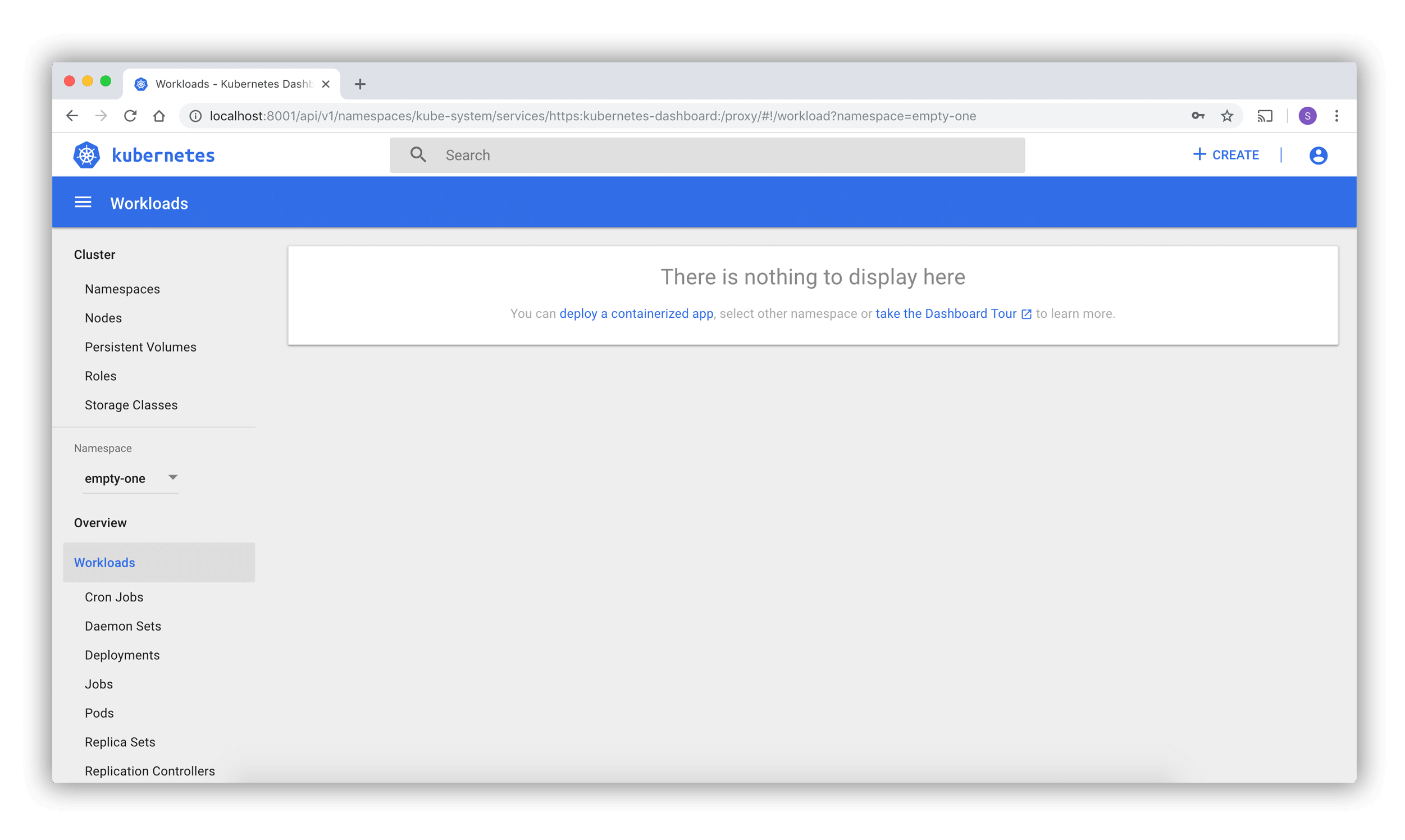 From here, you can access logs and many other features.

Developers within the K8s community are working on several additional tools beyond what we’ve covered here. I’ll briefly describe a few.

Helm allows you to manage packages used by your K8s infrastructure. These are called “charts,” and they enable you to abstract away package management. The nice part about Helm is that you can use preconfigured packages, or you can package up your existing applications.

If you’re familiar with Docker but not K8s, Kompose enables you to convert a Dockerfile into a K8s config file for deployments. There are a lot of cool things you can do with this.

If you want a general-purpose way to build clusters on your infrastructure, kubeadm is the way to go. Using K8s tools including kubeadm, kubelet and kubectl, you can quickly create a cluster.

Istio is a very popular open-source framework that is now available to manage message passing in your clusters. Istio does what a lot of the tools I’ve described in this post already do: if you set up Istio to work with your cluster, you’ll have a convenient third-party tool that can streamline communication between your cluster and nodes.

There are many other open-source projects that help with K8s. Typically, you see these in the form of either frameworks that can run in your control plane or SDKs that enable your containers to communicate with one another. The popularity and community behind K8s make working with this framework both fun and exciting.

I hope you’ve been able to learn something from the tools I’ve shown here. I highly recommend checking out the K8s GitHub repo to learn more about what the open source community is doing. There is a lot of cool things going on, and it’ll be exciting to see how Kubernetes evolves in 2020.