GraphQL Code Generator 1.5 is out! 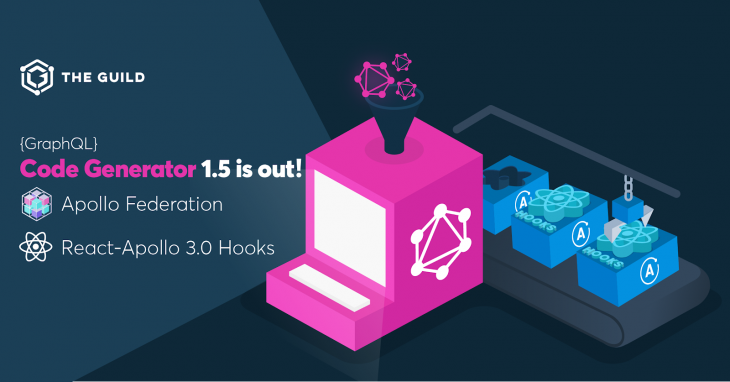 I am happy to announce a new version of GraphQL Code Generator!

The new version has plenty of fixes and a lot of new features (you can check out the full changelog here)!

The GraphQL Code Generator is part of a growing number of open-source libraries maintained by The Guild. If you explore those libraries you can see that they have very few issues and are extremely well maintained.

This is due to the unique working model of The Guild and our Connected Build system – a system where some of our users can connect their build pipelines into our libraries and we make sure to keep them updated and working (you can reach out directly if you want to join).

GraphQL Code Generator always supported generating types for the backend resolvers — one of the most used features.

Recently we’ve received a request to support Apollo Federation. We started looking into how we could do that and Kamil Kisiela began implementing Apollo Federation support into GCG version 1.5 in just a few days!

Now, your Apollo Federation services can have strongly typed resolvers, both in TypeScript and Flow, by simply enabling a flag in your codegen config:

In addition to TypeScript and JavaScript, we are also generating outputs for more backend languages, like Java for example. Please reach out if you want to test the generator for those languages as well.

So it was an easy update for us to support the new react-apollo 3.0 hooks that are based on the react-apollo-hooks library. We’ve also supported the beta versions of react-apollo during their testing period.

Instead of generating just TypeScript types, generate fully typed and ready to use hooks. Save yourself a lot of code and potential mistakes (such as typos or using the wrong interface) and be sure everyone in your team has it all strongly typed.

Read the documentation about those on our website in the react-apollo section and try out our full-stack WhatsApp Clone tutorial!

If you are using the Apollo codegen today, migrating to the GraphQL Code Generator is easy.

Our default generation output is different than Apollo’s, but because so many people are migrating to our codegen from Apollo, we’ve created some config flags (near-operation-file, preResolveTypes) to make it easier for people to migrate to the best practice more gradually.

But why would you even want to migrate from the Apollo codegen?

Thank you to everyone from the community who keeps pushing us, working with us and connecting to our connected-build, submitting issues, suggestions, PRs, and pure love!

See you in the next release!
The Guild