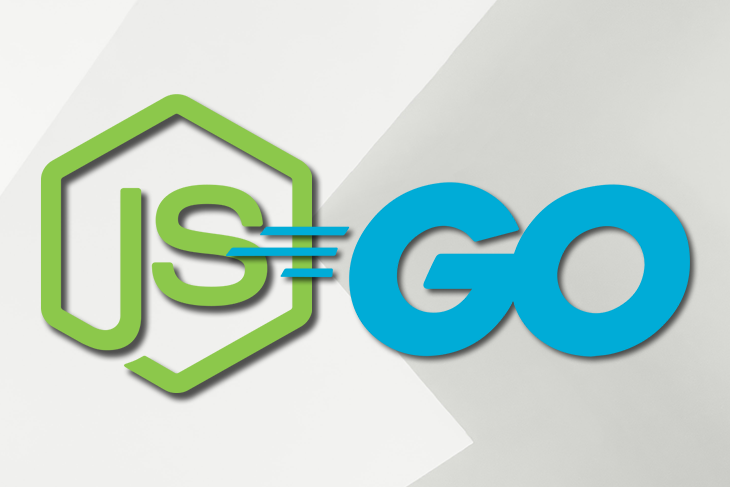 Editor’s note: This post was updated on 16 March 2022 to remove and correct outdated information.

Both Go and Node.js were first released in 2009 for the development of server-side and networking applications.

Go can solve a lot of problems ranging from systems, big data, machine learning, video editing and audio, and more. It also has the same performance as C because it compiles to machine code and doesn’t need a virtual machine or interpreter.

Before you dismiss this article as another “tech war or fight,” I suggest slowing down a bit and read on. This is just a comparison between Go and Node.js, where I will share the pros and cons of both.

So, while Go is a powerful tool, I’m not here to dismiss Node.js. Besides, it essentially depends on what you want to build with either.

Node.js and Go are insanely fast and good with multi-threaded programs (Node is single-threaded but it does the job very well, which makes multithreading unnecessary).

Okay, let’s quit playing around. In this article, we’ll look at the strengths and weaknesses of these two powerful tools, see how they approach different situations, understand their scalability, and answer the question, “Is Go overtaking Node.js.”

Node.js has been the most popular environment to build cross-platform applications with JavaScript. It helps build fast and scalable server-side applications with its great features like event-driven and nonblocking I/O model.

Go, on the other hand, is an open source, statically typed, compiled, cross-platform, fast, and multi-purpose language that provides concurrency at its peak, automatic memory management, and dynamic interfaces for structural type-checking.

Go is similar to C in terms of syntax and speed. It is also similar to C++ because it is compiled and a general-purpose language.

Not to bore you with these introductory or basics, both of them are popular and evolving and work best based on different projects, but we will delve into the pros and cons to determine which is suitable for your projects.

Is Go good at concurrency?

Goroutines is a strong aspect of Go; if a large project needs to handle a couple of requests simultaneously, Go will perform. This, however, is not the case for Node.js.

Is Node good for concurrency?

Node.js is a single-threaded tool that uses the event callback mechanism. This means every function or method executes in a linear order.

A callback is a function that executes after a function finishes executing, meaning we can only decide to wait for the result of a function to complete later. So, Node.js lacks concurrency.

When it comes to concurrency, Go is the inevitable winner.

Unlike Node.js, which uses the exception method to handle errors, Go uses the explicit style. There are no unexpected uncaught exceptions. For example, for every Go project, you see the following code more often than not:

Might sound redundant to a Go outsider, but one of Go’s main goals is to take in errors as first-class citizens of each function, which is a “plan for failure, not success” mentality.

Using if err != nil returns a value or error, it helps you note that failures must be treated first. There’s no need to wrap around try catch, which handles every possible exception.

Another beautiful thing about linters is that they catch you when you ignore an error.

What is error handling in Node.js?

In regards to Node.js, error handling is indistinct and not explicit. The below code handles the error properly, but there is no explicit or proper handling of what went wrong. The error just goes to the console, disallowing full responsibility.

Go uses a disciplined and methodical way of coding when dealing with errors, and is the winner here.

Out of the gate, Go beats Node.js in terms of scalability because it supports concurrency, which helps handle side-by-side tasks. Go can manage 1000 concurrent requests per second, making Go superior.

Node.js’ weakness is that it works on the single-threading mechanism, meaning that tasks are performed one after the other, making it less scalable. However, it does allow concurrency with event callbacks, but these are not effective and far from parallelism.

This doesn’t mean that Node.js isn’t scalable as well, but Go does it better with concurrency and is much more memory-efficient. So, if you have a more CPU-intensive application, Go is where you should go.

According to the Stackoverflow 2021 Developer Survey, Go easily overtakes Node.js at an annual salary of $76,800 compared to $56,860 for Node.js developers. 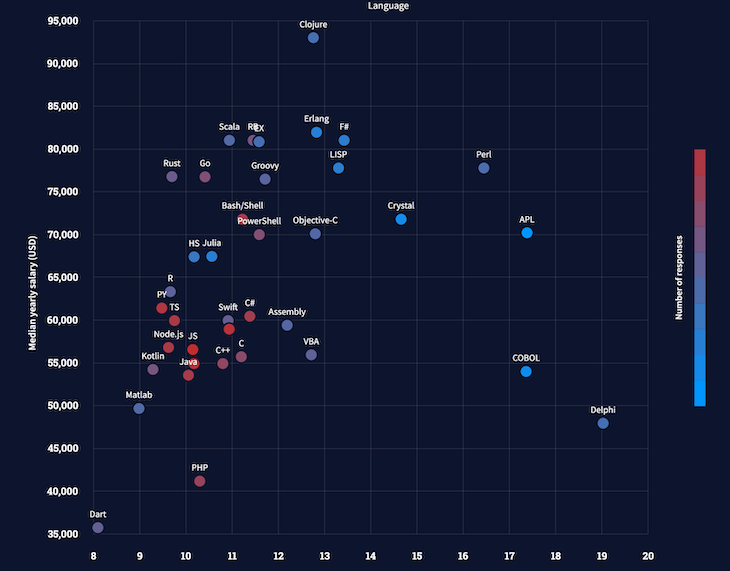 At this point, this isn’t even a battle.

For raw performance, Go developers have said it shows the same characteristics as C and C++ in terms of speed and performance, which is really good.

Go is even suitable for building microservices due to its ability for handling heavy loads, high speed, and support for concurrency. The fact that it compiles down to a relatively small, statically-linked native binary that has relatively small, fixed runtime costs makes it fit to install in a Docker container.

Does Node.js have high performance?

Node.js, in terms of raw performance, isn’t that great compared to Go, but in live performance, everything works the same as with Go.

Go has fewer development tools than Node.js in terms of libraries and packages. This alone means a lot of manual setup still has to be done by the developer for Go applications, including thorough research.

Node.js has a large community that has provided many libraries and packages for developers. This large community also provides more support on platforms like Stackoverflow, contributing to higher productivity when building a product.

Having compared both tools, Go and Node.js both have their pros and cons, but, notwithstanding Go’s performance, it seems Go is more reliable than its counterpart.

Go developers tend to have more pay than Node.js worldwide and error handling seems to be excellently handled, not that try catch isn’t good, but having full responsibility for errors should be important to a programmer.

We should not forget Go’s race condition detection, which is a good thing when creating multi-threaded applications because some processes might complete in an unexpected order.

Also, Go is a compiled language that gives your app speed.

As you can see, Go wins a few of the battles but it is still hard to give the prize to it because it is hard to say which is better. It just depends on the application you want to build.

An application that must handle a thousand requests will simultaneously use Go to scale.

Also, while Go is also great and perfect for microservices and enterprise projects that must handle high loads, Node.js still has many development tools for every challenge, thereby reducing development time.

But, you might need to take into consideration the type of project (I keep repeating this), size, and structure to achieve your end goal.

Victor Jonah Follow I am a Software Developer with over three years of experience working with JavaScript and its frameworks. I currently work as a remote software developer for a tech agency.
« Google Cloud Firestore and Realtime Database in Flutter
Rendering JSON animations in React applications »

25 Replies to “Is Go overtaking Node.js?”