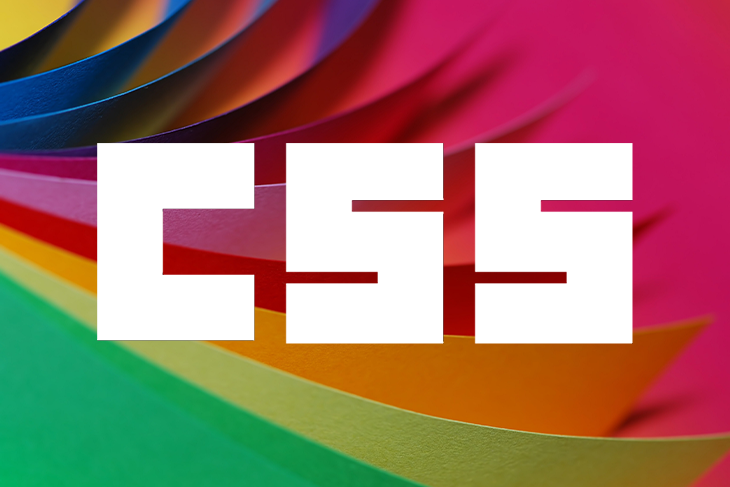 Developers working with CSS historically relied on predefined color keywords or obscure HEX values to select and apply colors. However, as CSS evolved, more user-friendly, flexible alternatives became available, such as RGB (red, green, blue) and HSL (hue, saturation, lightness) functions. There was also the introduction of the alpha channel, allowing for the control of transparency.

Some CSS improvements focused on ease of implementation, rather than functionality. For example, opacity was initially specified using a separate color function, rgba(), but then progressed to being available as a fourth parameter in the RBG function. Here’s a comparison of how we would define pure black using different CSS color functions: hex(# 000000),rgb(0, 0,0), rgba(0, 0, 0, 0.4), and HSL(0, 0%, 0%).

The CSS Color Module Level 5 provides a host of new color functions and improvements, opening up a world of new possibilities for developers. One example is the LCH color function, which provides access to approximately 50 percent more colors.

In this article, we’ll introduce some of the new color specification methods available with CSS Color Module Level 5. We’ll review their advantages and we’ll show how these color functions may be used. We’ll also discuss browser support for these new methods.

We’ll look at the following CSS color functions and methods:

HWB (hue, whiteness, blackness) is a color specification method that is similar to HSL. The hue argument can be any number between 0 and 360, and it refers to a specific color on the color wheel (red, blue, teal, plum, etc.).

There’s also an optional fourth argument, the alpha parameter, that may be added to the mix to specify the color’s opacity.

The below chart shows the range of colors for a red hue with various percentages of whiteness and blackness:

We can see that as the whiteness or blackness reaches 100 percent, the selected hue becomes white or black, respectively, leaving no trace of the chosen hue.

LAB color functions are based on the CIELAB color space. which represents colors in a way that closely matches human perception. This color function provides access to a wider spectrum of colors than offered by the traditional RGB color space. LAB colors are referred to as device-independent colors.

The LAB color space represents light more successfully than the HSL color space. It’s important to note that the lightness axis in LAB should not be confused with the L axis in HSL.

Here’s a good example as stated in the specifications:

Here’s an example illustrating the lightness axis of the LAB color space:

The L axis of the LCH color space is identical to that of the LAB color space. In fact, both color spaces allow access to a far wider range of colors because they are meant to cover the full spectrum of human vision.

The L in LCH is a percentage that stands for light channel, and it can exceed 100 percent. C, or chroma, indicates the amount of color in the mix. We think of this value as saturation in the HSL color space. In LCH, it can exceed 100 percent. When it does, the color will be outside the gamut of today’s browsers. Finally, H stands for hue. This can be a number between 0 and 360, analogous to that of HSL or HWB.

Unlike HSL or RGB, where adjusting lightness has a varying effect depending on the hue, LCH is perceptually uniform. The same numerical change in coordinates results in the same perceptual color difference, making it flexible enough for color manipulation.

For more in-depth information about the LCH color space, refer to this detailed article by Lea Verou: LCH colors in CSS: what, why, and how?

Below are the three colors defined in the LCH color space, shown with identical light value (50%). Because LCH is perceptually uniform, these colors are perceived to have the same lightness; this is not the case for the HSL color function. 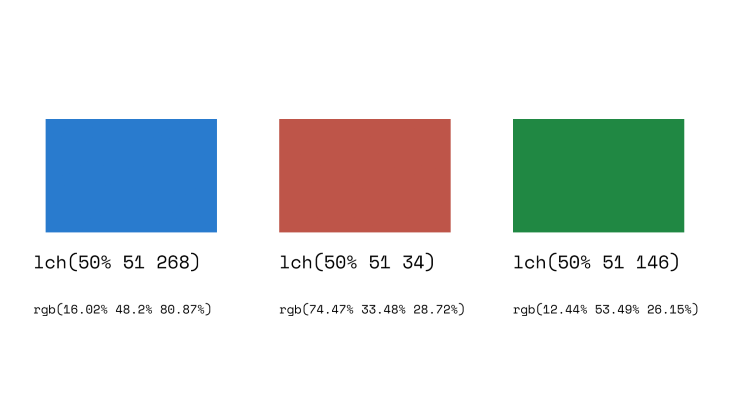 The color-mix() function returns the result of two colors mixed in specified percentages. For example, color-mix(in lch, purple 50%, plum 50%) produces a mixture of 50% purple and 50% plum.

If you’ve worked with Sass previously, this probably looks familiar. It is very similar to the Sass color mix function: mix($color1, $color2, [$weight]), where the $weight parameter specifies the percentage of $color1 to be added.

Here are some additional items to note when working with the CSS color-mix() function:

The color-contrast() function helps developers build websites that are accessible to people with differences or impairments in vision. Higher color contrast between the content and background improves the readability of text and non-decorative images.

color-contrast() compares the values of two colors from a list. The colors are examined from left to right, and the browser chooses the first color that matches the specified color ratio. If no color matches the desired color ratio, the color with the highest value (highest contrast) is selected.

Here are some additional details regarding the color-contrast() function:

Styling form controls can be tedious and frustrating. Developers are often faced with the choice of adopting the browser’s default styles or designing them from scratch in order to have styling freedom. The CSS accent-color property allows us to change the color of accented form controls provided by the browser’s default styles to a custom color value.

The accent-color property is great for styling form controls, but we can currently only use it on specific elements, namely: checkbox, radio button, range, and progress.

One notable feature of the accent-color property is that it respects color schemes. For example, if a user has selected light appearance for their OS setting preference, the browser would analyze the accent-color value and choose an acceptable UI color. This ensures a perceptible color difference between the browser’s UI and the accent.

Some of the methods introduced above are still considered experimental, since they do not have full browser support as of the time of this writing. Below is a summary of current browser support for the CSS color methods discussed in this article.

The new CSS color features are incredible, providing access to a much wider spectrum compared to the traditional RGB color space. They will enable developers to represent colors in ways that more closely resembles human perception. Of course, some of these features are still experimental and subject to changes or revisions. But, for now, it certainly looks like a promising future for colors on the web!

Nelson Michael Follow Nelson Michael is a frontend developer from Nigeria. When he's not meddling with CSS, he spends his time writing, sharing what he knows, and playing games.
« Hacker News client with Chakra UI and Next.js
React Native WebView: A complete guide »