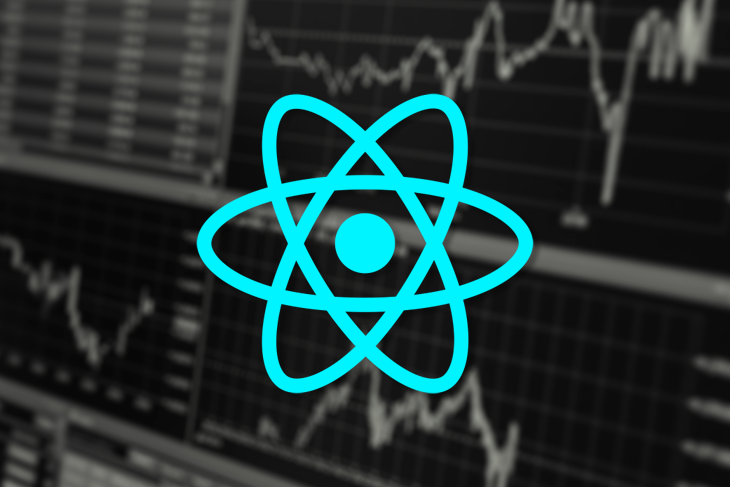 Table UIs are very common in web products because it’s one of the most efficient ways to organize complex data in the UI.

Building a table UI from scratch can be a tall order, and React tables, in particular, is known to give developers headaches. Fortunately, there is a wide variety of tools and libraries available to make the experience of creating a React table much simpler and more rewarding — most notably, React Table.

In this tutorial, we’ll show you how to build a smart React data table UI with basic sorting and searching functionalities using react-table.

What are React tables used for?

Some common use cases for React table UIs include displaying data for financial reports, sports leaderboards, and pricing and comparison pages, to name just a few.

Some products that use tables extensively include:

Among the tech giants that use React Table are Google, Apple, and Microsoft.

What is React Table?

React Table is one of the most widely used table libraries in React. It has more than 13,000 stars on GitHub at the time of writing, receives frequent updates, and supports Hooks. The react-table library is very lightweight and offers all the basic features necessary for any simple table.

In March 2020, React Table creator Tanner Linsley released React Table v7, which he described as “the culmination of over a years [sic] worth of work to refactor the entire library to a hooks-only UI/Style/Markup agnostic table building utility.”

React Table v7 is comprised of a collection of React Hooks and plugins designed to help you compose logical features of complex data grids into a single, performant, extensible, and unopinionated API, which is returned by the primary useTable hook.

As a headless utility, React Table v7 doesn’t render or supply data table UI elements out of the box. That means you’re responsible for rendering your own table markup using the state and callback of the hooks provided by React Table.

Check out our comprehensive guide to building and stying tables with react-table v7 for a closer look at what’s new in the most recent stable react-table release, or read on to learn how to render your own React table component with react-table.

Use React Table when your table UI needs:

When not to use react-table

Consider another React data table library when you need:

Basic features of a React data table UI include:

Advanced features in a React data table UI include:

UI-wise, data tables are one of the best options to show complex data in an organized way. But UX-wise, it’s tricky — it can easily get out of hand when you support multiple devices. Some of the UX challenges for tables include:

It’s difficult to make a table responsive without changing the layout to suit smaller screen sizes.

A table might need scrolling in both directions. Default browser scrollbars will work well for full-width tables, but most are of a custom width. Custom scrollbars are very tricky to support on both touch and non-touch screens.

Managing the width of the column based on data length is tricky. It often causes UX glitches when we load dynamic data in the table. Each time the data changes, it resizes the column width and causes an alignment glitch. We need to be careful in handling those issues while designing the UX.

When to build your own React table UI

Scenarios in which you might want to build your own React  table UI include:

Here are some common use cases for building your own React table UI, to name just a few:

Enough theory — let’s dive into a real React Table example. To demonstrate how to use react-table to create a React table component, we’ll build a simple table UI with basic functionalities such as sorting and searching. Here is the React table example we’ll be working with.

Calling an API with Axios

This is the API endpoint. We are going to call and fetch the shows’ information with the search term “snow” using Axios.

In order to call the API, let’s install axios:

We create a state called data, and once the component gets mounted, we call the API using Axios and set the data.

Adding react-table to your app

react-table uses React Hooks. It has a main table Hook called useTable, and it has a plugin system to add plugin Hooks. Thus, react-table is easily extensible based on our custom need.

Let’s create the basic UI with the useTable Hook. We will create a new Table component that will accept two props: data and columns. data is the data we got through the API call, and columns is the object to define the table columns (headers, rows, how the row will be shown, etc.). We will see it in code shortly.

Here in the columns, we can create multiple groups of headers and columns. We created two levels.

All the columns also have an accessor, which is the data we have in the data object. Our data is inside the show object in the array — that’s why all our accessors have show. as a prefix.

In this way, we rendered the cell and the header. But our cell values are just strings, and even the array values get converted into comma-separated string values. For example:

In the table, it will simply render as a comma-separated string, e.g., Comedy,Sci-fi. At this point, our app should look like this: 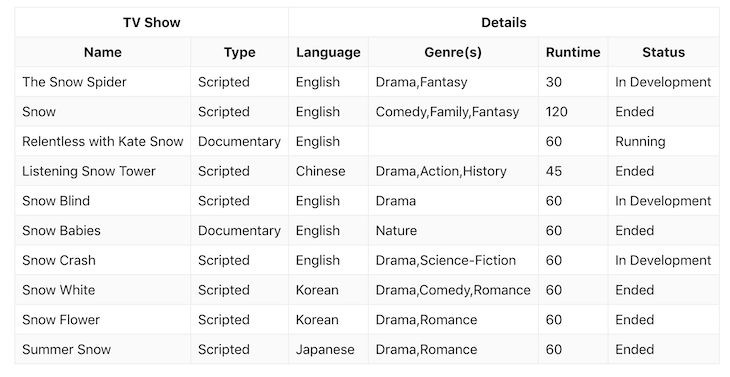 This is a fine table for most use cases, but what if we need custom styles? react-table allows you to define custom styles for each cell. It can be defined like this in the column object. Let’s create a badge-like custom element to show each genre.

In the example above, we access the value through the Cell method and then return either the computed value or custom component.

For Runtime, we compute the number of hours and return the custom value. For Genres, we loop and send the value to a custom component, and that component creates a badge-like element.

It’s very easy to customize the look and feel in react-table. After this step, our table UI will look like this:

Let’s add a bit more functionality to our table. If you look at the demo page for react-table, it already provides everything you need to create a custom smart table. Just one thing is missing in its demo: global search functionality. So I decided to create that using the useFilters plugin Hook from react-table.

It’s a straightforward, simple state to manage the input state. But now, how to pass this filter value to our table and filter the table rows?

For that, react-table has a nice Hook plugin called useFilters.

In our example, we are going to set the filter only for the Name column. In order to filter the name, when the input value changes, we need to set our first param as the column accessor or ID value and our second param as the search filter value.

This is how the UI looks after the search implementation:

This is a very basic example for filters, and there are several options provided by the react-table API. You can check out the API documentation here.

Let’s implement one more basic functionality for our table: sorting. Let’s allow sorting for all columns. Again, it’s very simple — same as for filtering. We need to add a plugin Hook called useSortBy and create the style to show the sorting icon in the table. It will automatically handle the sorting in ascending/descending orders.

Based on the sorting, we add the class names sort-desc or sort-asc. We also add the sorting props to the column header.

This is how the UI looks after our sorting implementation:

Of course, you can extend this demo even further — let me know if you need help in the comments section. Some ideas to extend it include:

Check out react-table’s extensive example page to extend this demo. It has a very good kitchen sink to play around with, and it provides solutions for most use cases.

Although react-table is the most popular React table library, it’s not always the best solution for building tables in React. there are plenty of alternatives that might also suit your needs, depending on your particular project and use case.

Below are some alternative React table libraries that are worth checking out.

react-data-grid is used for creating smart tables. It has more than 4,000 GitHub stars and is well-maintained.

Use react-data-grid when your data table needs:

When not to use react-data-grid

react-data-grid covers almost all the basic needs for a data table. However, it doesn’t support pagination by default, so if your table requires pagination, you need to manually implement and handle it. By default, react-data-grid supports longer table UIs and is optimized for performance, so pagination might not be necessary unless the UX demands it.

It also uses Bootstrap for styling. You can still use react-data-grid without it, but then you’d need to add your own styling for the table. It’s not easily customizable compared to react-table, which allows you to create the table structure. Here in react-data-grid, the library creates the table UI, so it’s not great for UI-heavy custom pages.

While the above points aren’t exactly shortcomings, they’re nice to know about before you start using react-data-grid.

Intermediate needs when you have to build a mini editable data table similar to Google Sheets or Airtable with nice UX.

react-datasheet is similar to react-data-grid. It has around 4,500 GitHub stars and is likewise a well-maintained library.

It primarily focuses on helping you create your own Google Sheets-like application. It has basic features built in to create such UX-heavy applications. Once again, it might not be suitable for creating a general-purpose page UI with tables.

Unlike react-data-grid, however, it is not optimized for large datasets, so use it for small applications that need Sheets-like functionality. It has only this one use case, and its features are very limited compared to those of react-data-grid.

As the name implies, react-virtualized is heavily optimized for performance when the dataset is large. This library is not exactly a table library; it does much more. It is exclusively for displaying large datasets on the UI in different formats, like grid, table, and list.

When your dataset is very large, rendering performance is the key metric for the table; if that’s the case, go for react-virtualized. For normal use cases, this library would be overkill, and the API would be too advanced.

How to choose a React table library

This is how the final React Table demo looks after we added sorting. You can play around with the demo and check out the codebase for our React Table example.

We have learned how to build a table UI using React. It’s not difficult to create your own table for basic use cases, but make sure you’re not reinventing the wheel wherever possible. Hope you enjoyed learning about table UIs — let me know about your experience with tables in the comments.

13 Replies to “React Table: A complete tutorial with examples”