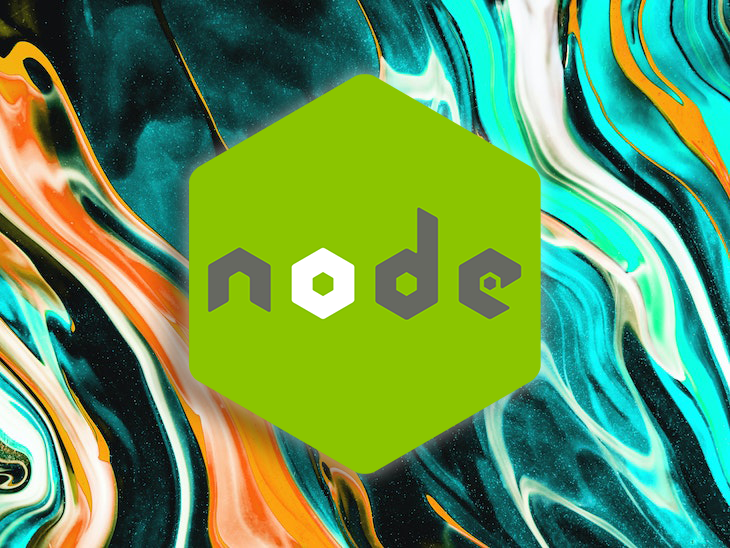 Early on in the practice of software development, best practice involved tightly coupling all of the software’s components in what is known as a monolithic application. However, monolithic applications require extra effort to respond to changes in the system. If any particular component develops a fault, the entire system is affected.

Nowadays, we can solve the problem using microservices, which allow us to build our software product components separately. If there is a fault in one component, it won’t affect the functioning of the entire software product.

In this article, we’ll review the concept of microservices, learn how to implement a microservice with Node.js, and explore how microservices are changing the practice of software development. Let’s get started!

To follow along with this article, you’ll need the following:

Imagine you’re building a library management system, and all of the components, like books, users, and their respective services and databases are fused together as one unit. If there is a fault in any one component, the entire system will need to be brought down to correct the error.

For this reason, monolithic applications are neither flexible nor easily scalable. You cannot build features concurrently or achieve continuous deployment. However, while monolithic applications are not cost-effective to manage, they are cost-effective to build. Developers recognized the need to create a system in which one faulty component wouldn’t affect the entire software system.

Microservices became necessary due to the shortcomings of the monolithic pattern of software development. In a microservice, each software application feature is separated from the other, in most cases with their respective servers and databases. Applications built with this kind of architecture are loosely coupled, also referred to as distributed applications.

Imagine we’re building an ecommerce store. We’ll need models for a payment feature, cart, customers, admin, and order. Each of these features will have its own separate servers and databases.

Our ecommerce microservices will communicate with each other using the REST API framework. With our store features developed independently from each other, we can easily identify which feature to debug if our system develops a fault and avoid having to bring down the entire application.

Overall, microservices offer a better developer experience. A new developer joining the team won’t have to understand the entire code base, but rather only the features they are working on, increasing productivity. Lastly, unit testing is encouraged in microservices. A unit test can be written to test a particular functionality.

However, it’s important to keep in mind that building microservices requires expertise because integration and end-to-end testing can be very challenging. Additionally, microservices can become very bulky, causing high maintenance costs. Finally, it’s not always easy to migrate software already developed using monolithic architecture to a microservice, and it can be challenging for applications to locate each other within a complex network.

Using Node.js for our microservice

You can use any programming language, like Java, C#, or Python to develop a microservice, but Node.js is an outstanding choice for a few reasons.

For one, Node.js uses an event-driven architecture and enables efficient, real-time application development. Node.js single-threading and asynchronous capabilities enable a non-blocking mechanism. Developers using Node.js to build microservices have an uninterrupted flow, with Node.js code being fast, highly scalable, and easy to maintain.

To illustrate how to develop microservices with Node.js, we’ll use the OpenWeather API service. First, create a free account.

If Node.js is not installed, go ahead and download it. In weathermicroservice, run the command below to initialize the package.json:

Now, let’s install our required dependencies with the command below:

Now, your package.json file should look similar to the screenshot below: 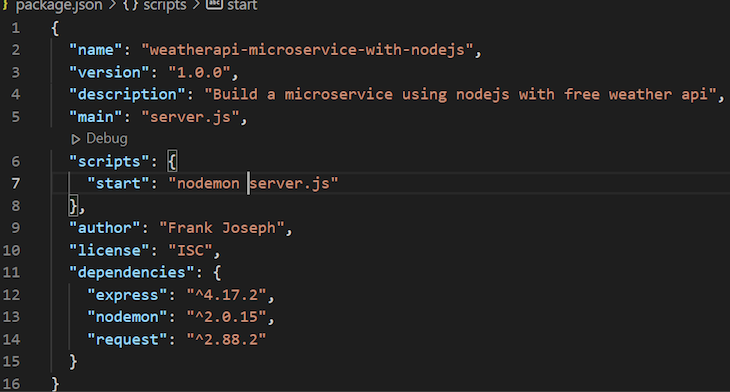 Directly inside the main folder, create a file called server.js. Inside, write the following code:

server.js is the main file for our microservice app, as indicated in our package.json file. Next, we’ll create another folder inside the weathermicroservice folder named api_source.

The function takes weatherApp as a parameter and defines the routes for our application. weatherApp.route("/about") listens for a GET request on the /about endpoint.

This request is then handled by the about function in the controller.js file. The weatherApp.route("/weather") listens for a GET request on the /weather endpoint. The getWeather function handles the request.

Inside the weather.js file, write the following code:

In the code above, we use the find function, which accepts three parameters, request, response, and next objects. The request object in line 10 accepts the URL of the service and defines a callback function to handle the response.

5 Replies to “Building microservices with Node.js”