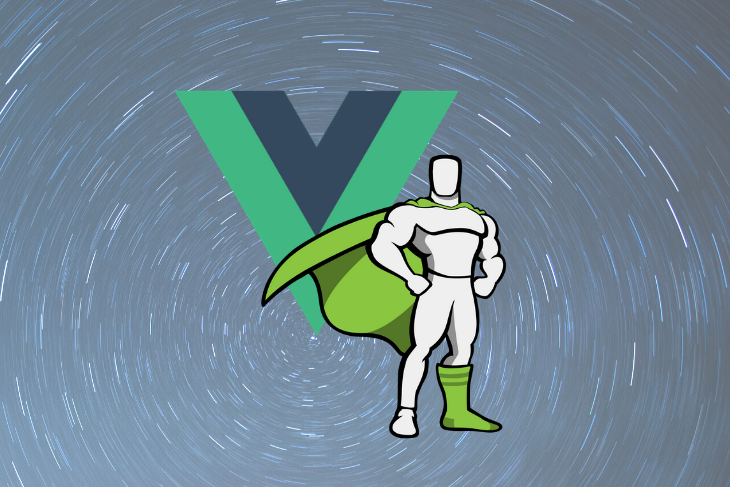 According to Time, website visitors decide whether to engage with a site or bounce off the page in just 15 seconds. That means you have only a quarter of a minute to capture your visitors’ attention.

What does this have to do with animations?

Long blocks of text and boring interfaces can increase a user’s cognitive load. Animations and microinteractions can help keep users engaged and reduce the cognitive load while using your website.

However, when not done right, animations can hamper user interactions with your product and negatively impact sales. Performant and easy-to-use tools like GreenSock exist to make animating our Vue apps exciting.

The GreenSock Animation Platform, also known as GSAP, is a powerful JavaScript animation library that helps developers build performant and engaging animations. It has a very shallow learning curve and requires little knowledge of JavaScript.

According to the platform’s official website, GSAP “animates anything JavaScript can touch (CSS properties, SVG, React, canvas, generic objects, whatever) and solves countless browser inconsistencies, all with blazing speed (up to 20 times faster than jQuery).”

GSAP is framework-agnostic and can be used across anywhere JavaScript runs. It has a very minimal bundle size and won’t bloat your app. It is backward-compatible and works with SVG pretty well.

In this tutorial, we’ll explore the building blocks of GreenSock and learn how to use it to bring user interfaces to life by animating our Vue app contents.

The following is required to follow along with this tutorial, which uses the latest version of GreenSock, GSAP 3.0:

You can install Vue CLI with the following command using Yarn:

First, create a project with this command:

Next, change to your project’s root directory with this command:

Type in the following to add GSAP as a package to our project:

You can include GSAP in your pages or component files with this command:

The fundamentals of GSAP

Let’s take a closer look at the basic building blocks of GSAP.

A tween is the single instance of what applies predefined property values to an object during the process of animating an object from one point to another on a webpage.

It takes in three parameters:

Tweens are written in the following format:

GSAP provides myriad methods to create animations. The following are among the most important.

gsap.to() defines the values to which an object should be animated — i.e., the end property values of an animated object — as shown below:

This command would move an element with a class of circle 500px across the x-axis in three seconds. If a duration is not set, a default of 500 milliseconds would be used.

Note: The CSS transform properties translateX and translateY are represented as x and y for pixel-measured transforms and xPercent and yPercent for percentage-based transforms, respectively.

gsap.from() defines the values an object should be animated from — i.e., the start values of an animation:

This command resizes the element with a class of square from a scale of 2.

gsap.fromTo() lets you define the starting and ending values for an animation. It is a combination of both the from() and to() method.

Note: When animating positional properties, such as left and top, the elements you’re animating must have a CSS position value of absolute, relative, or fixed.

Easing determines how an object moves from one point to another. An ease controls the rate of change of an animation in GSAP and is used to set the style of an object’s animation.

GSAP provides different types of eases and options to give you more control on how your animation should behave. It also provides an Ease Visualizer to help you choose your preferred ease settings. 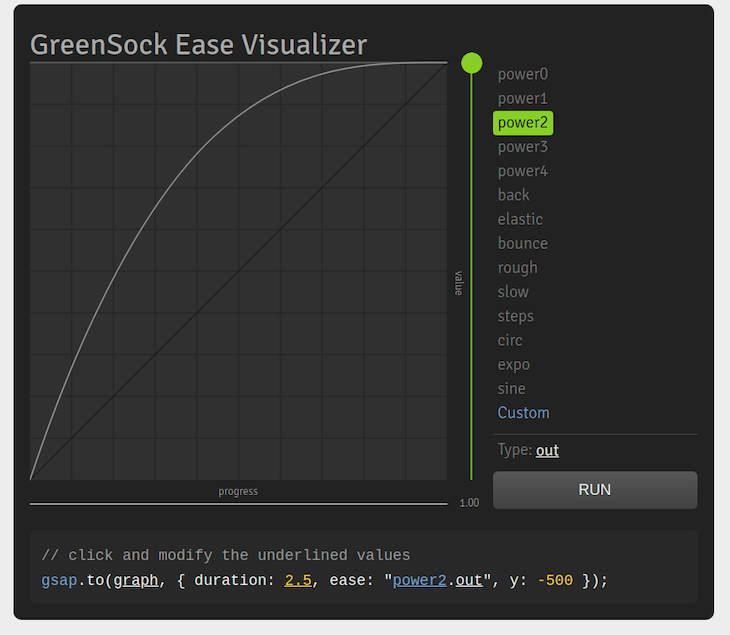 There are three types of eases, and they vary in how they begin or end animating.

In the last example, we chained three tweens that displayed the available types of eases, but we had to set a delay of the number of seconds it takes the animation to complete before starting the next one. You can avoid this by putting the tweens in a timeline.

A Timeline serves as a container for multiple tweens. It animates tweens in a sequence with each beginning just after the last one ends, except when set otherwise, and it is not dependent on the duration of the previous tween. This eliminates the need to set a delay before the next tween begins animating.

Timelines can be created in the following format:

You can also chain multiple tweens to a timeline, as shown below:

Lets recreate the previous example with a timeline:

The position parameter is an important factor in animating with a timeline because it sets the point of insertion of a tween in an animation sequence. As we learned earlier, it is the third parameter in a tween method and it comes after the config object.

The default position is "+=0", which just inserts a tween at the end of a sequence.

You can set the position parameter as multiple types of values, but we’ll focus on some of the most important ones.

"Number" refers to an absolute time of that number.

The above command inserts the tween exactly 5 seconds from the beginning of the timeline.

"+=Number" or "-=Number" inserts a tween at a positive or negative relative time, as demonstrated below:

"<" or ">" inserts a tween relative to the previous tween’s start or end time.

Alternatives to GSAP for animating Vue

While GSAP is a very good choice to animate Vue apps, there are alternatives, including:

In this article, we’ve covered how to use GreenSock to create animations. The possibilities are endless when animating with GreenSock because you can get more done with less code without worrying about backward compatibility while maintaining great performance across browsers.

Beyond the shallow learning curve, GSAP has very large community of users, resources abound and active forums that contain many of the answers you may be looking for.

The official GreenSock documentation is quite extensive and covers features and other useful methods not mentioned in this article. You can also check out this Vue animation workshop repository open-sourced by Sarah Drasner.

4 Replies to “Animating Vue with GreenSock”