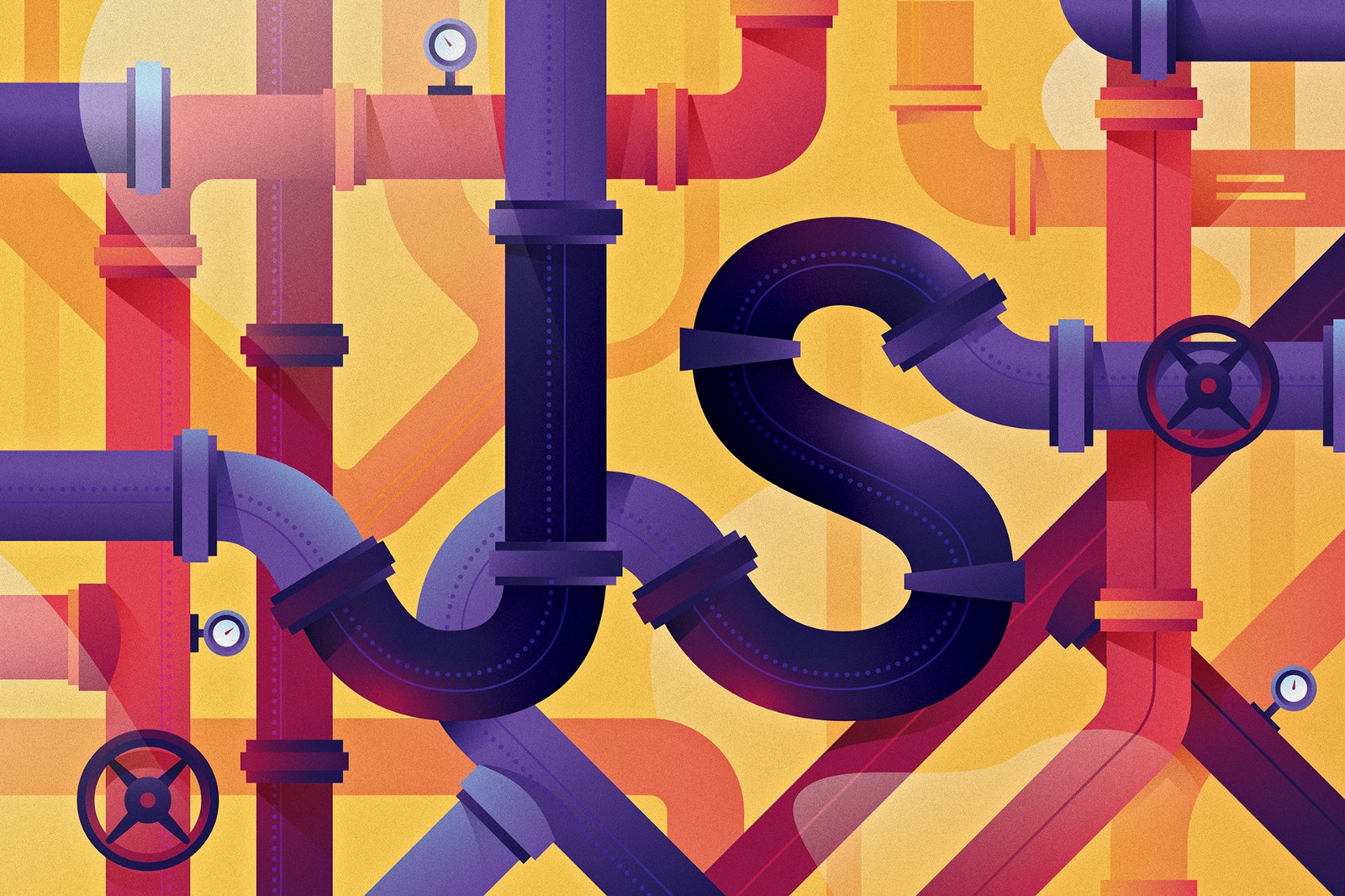 Pipelines enable clean chaining of operations, but they’re not quite ready just yet

The usage of pipes to transport water, air, gas, or any other fluid substance has enabled tons of things we take for granted. Pipes allow us to transport water to our homes so that we can use things like the sink and bathtub. Our ovens and heating systems rely on pipes transporting gas. Even a straw for drinking out of a cup is a little pipe, if you think about it!

So how does a pipeline work?

If you haven’t worked much with pipes, you might be thinking, “That’s it? Why is this even worth anyone talking about?”. And to some degree, adding simple pipeline operators won’t change how JavaScript works too much. The exciting thing about pipes is that they make certain types of operations really easy to read!

As you can see, either way is “right” in that it produces the same result. But using the pipeline syntax allows us to dramatically decrease the amount nested parentheses we have.

If you’re working with data frequently, you might be doing a lot of operations on your data as it comes into your application in order to make it fit better to how your application uses it (I know I do!). Pipes are extremely useful for describing these sets of transformations since instead of having to read your data transformations backward (from the innermost parentheses to the outermost call) you can just read them top-to-bottom in the order that they execute.

Using pipelines like this also encourages us to create a lot of small, isolated functions where each function does only one thing. Later on, when we need to do more complex things, we can just stitch all of our atomic functions together in a clean, readable format! This helps with testing our application logic (we don’t have one massive function that does everything) as well as reusing logic later on.

What’s holding up the pipelines?

There’s a ton of exciting proposals going through TC39 right now, why are we diving into pipelines? For one, pipelines already exist in a whole host of functional languages — Elm, Reason, Elixir, even Bash! Because they already exist we can easily see how they improve code readability based on their usage in other ecosystems.

As another reason, pipelines have the potential to make nested operations way cleaner, similar to the way that arrow functions made anonymous functions a lot easier to follow (in addition to the slight functionality differences they add). This gets me really excited about seeing them come to JavaScript and the effect that they might have on functional programming in JavaScript

As cool of an addition to ECMAScript pipelines will be, they’re not quite ready to be added anytime soon. The proposal is currently in Stage 1, meaning that the discussion about what JavaScript pipelines should be is still in full swing (If you want a quick refresher on the spec & proposal process, check out this document for a great little chart). As it stands today, there are three main proposals competing detailing what a pipeline operator could look like in JavaScript.

As the name suggests, the simple pipes proposal is the least complex of the pipeline contenders, behaving exactly like the example we saw up above. Within this proposal, the pipeline is only responsible for taking the evaluated expression on the left and using it as the input to the function on the right.

Using an arrow function within a simple pipeline requires that you wrap it in parentheses.

Another “gotcha” is the output from the left side is passed into the right side function as a single argument. This means that if we have a function expecting two arguments we would need to wrap it in an arrow function in order to guarantee that our arguments are in the correct order.

Because of this, using simple pipes tends to promote the use of curried functions — especially if the data being passed in from the left side is the last argument to the function. If we curry our prepend function, it’ll be easier to add to our pipeline since it now it doesn’t require wrapping an arrow function.

Since our curried prepend function returns a new function that receives the output of toUpper, it makes the pipeline considerably cleaner!

The last noticeable thing about the simple pipeline proposal is that there is no special treatment for await. In this proposal, await within a pipeline isn’t even allowed. Using it will throw an error!

The F# pipeline proposal is super close to the simple pipelines proposal. The only difference is the ability to use await within a pipeline chain to allow for asynchronous operations. Using await in the middle of a pipeline waits for the function on the left to resolve before running the functions later on the pipe.

The above example would desugar to something that looks like this:

3) Last but not least: smart pipes

In Hack, the token used is $$, but the ECMAScript proposal has been considering using something like# as a token. A Hack-style pipeline in JavaScript might look like this:

In addition to having a “token style” requiring the use of # on the right side of the pipeline, smart pipelines would also allow a “bare style”. This “bare style” would be closer to the simple/F# pipes proposals. Based on which style is used, the pipe would assign the left value of the pipe differently. That’s what makes them so “smart”!

In addition, usage of await inside of the middle of the pipeline would also be allowed. The possibility of using tokens along with the ability to write asynchronous pipelines allows this proposal to supply an extremely flexible pipe that can handle virtually any group of nested operations.

However, adding the extra sugar to the smart pipelines does complicate the syntax considerably over the simple pipelines and the F# proposal. In addition to adding a pipeline syntax (|>), a placeholder syntax needs to be agreed upon and implemented.

Another concern with these smart pipelines is that there’s a lot of syntactic sugar and “magic” going on with how the pipe works. Adding this type of magic to the pipes could result in some confusing behavior and might even negatively impact readability in some cases.

Of course, since this proposal is still being fleshed out, these concerns are being taken into consideration and I certainly hope we end up with something that is both simple to understand and elegant to use.

Pipelines and the JavaScript ecosystem

As we’ve seen, pipelines aren’t close to becoming part of the ECMAScript spec — they’re only in Stage 1 and there’s a lot of differing opinions about what they should be.

However, let’s not see these competing proposals as a bad thing! The number of differing opinions and proposals is a great part of the JavaScript ecosystem. JavaScript’s future trajectory is being determined out in the open — anyone can chime in with their thoughts and actually make a real impact on the language. People like you and me can go read through these discussions on the TC39 repo on GitHub and see what things are going to be added to the language!

While some may see this “open-source” development of JavaScript as a weakness (since the input of so many voices might detract from a language’s “cohesiveness”), I think it’s something many people, myself included, enjoy about the JavaScript language and ecosystem.

In addition, Babel is currently working on plugins for these 3 pipeline proposals so that we as developers can play with them before a proposal is fully adopted. With JavaScript, backward compatibility is super important. We don’t want older websites to break when new language features are added! Being able to try out these language features during the spec and approval process is huge for the JavaScript ecosystem since developers can voice any concerns before a language feature gets set in stone.

If you want to get started playing around with pipelines in JavaScript, check out this repo I made as a playground. Currently, the only proposal supported by Babel is the simple pipeline proposal, so that’s the only one I was able to play around with. That said, work on the other two is well underway, and I’ll try to update once the other two syntaxes are supported by the plugin.

What do you think about the pipeline proposal? Which is your favorite proposal? If you’ve got any questions feel free to reach out or tweet at me!

Benjamin Johnson Follow Software engineer. Learning every day, one mistake at a time. You can find me online at benjaminjohnson.me.
« The question of “why?” in single-page application frameworks
What’s new in Create React App 2 »