A complete guide to React Navigation 5 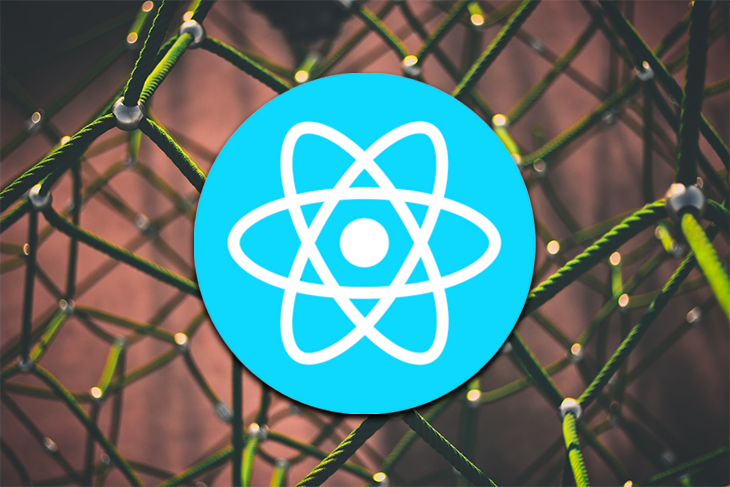 Developing mobile applications involves many moving parts. From styling, functionality, authentication, and session persistence to navigation. The goal of this article is to arm you with the necessary skills and knowledge to build simple and complex navigation systems in React Native-powered apps using React Navigation 5.

React Navigation is a library consisting of components that makes building and connecting screens in React Native easy. It is important to understand how navigation in mobile applications works, and what major differences exist between mobile-based navigation and web-based navigation.

If you’ve designed and developed websites before, navigating between various web pages, and within the same web page is possible through the anchor tag <a>, which consists of various attributes that allow developers to manipulate navigation in web pages. Developers do not have to explicitly define the behavior of the pages, as this can be handled by the browser. With mobile applications, navigation needs to be explicitly handled and defined during the early stages of development. From defining the navigation type to nesting the navigation, navigation in mobile applications requires more effort and can sometimes be quite complex.

This consists of patterns in navigation that require you to use a drawer from the left (sometimes right) side for navigating between and through screens. Typically, it consists of links that provide a gateway to moving between screens. It’s similar to sidebars in web-based applications. Twitter is a popular application that makes use of the drawer navigation.

Transition between screens is made possible in the form of stacks. Various screens are stacked on top of each other, and movement between screens involves replacing one screen with another. A popular application that makes use of stack navigation is the WhatsApp chat screen.

Most times, mobile applications make use of all types of navigators to build the various screens and functionalities of the application. This is called nesting navigators. A popular application that makes use of this concept is Twitter. The home screen contains a drawer navigation type, with which you navigate to other screens. The search tab contains a top tab navigation and allows you to move from your Direct Messages (DMs) screen to a chat based on a selected Tweet. This is made possible through the stack navigation.

This article covers how to create these navigations one after the other. Then, we’ll proceed to combine them through nesting.

For the purpose of this tutorial, we’ll be making use of Expo. Expo makes developing mobile applications using React Native very easy. There are loads of other benefits, so you should check the documentation here.

I have provided a GitHub repository with the basic setup needed to follow through this tutorial. We’ll go through installing our various React Navigation packages together. Clone the repository here.

Let’s take a second to understand the packages we just installed. We installed react-native-gesture-handler to provide Native-driven gesture management APIs for building the best possible touch-based experiences in React Native.

You can skip installation and get started on step one of this process. In it, you’d find all we’ve installed above. Run npm i to proceed.

First, you’ll find an App.js file. That’s the entry to our application.

You’ll also find a babel.config.js file, which contains an Expo Babel configuration. You do not need to bother yourself with this, as Expo automatically takes care of this.

An app.json file will also be present that contains the shared configuration of our application for IOS, Android, and other web platforms. Here you can handle splash screen configuration, orientation, version, etc. You should check this guide for an extensive list of configurations available.

In the root directory, create a new folder called src.

Before we proceed, let’s understand what we need to build.

Now that we understand what we need to do, let’s create four files. Three to hold the 3 types of navigation we have and an index that would serve as the entry of our navigation that combines all 3 together.

Navigation in React Navigation 5 is made possible by mapping a navigation screen configuration that’s wrapped in a navigation container to the specific screen of your application. To successfully create the navigation, we must have screens to connect them to.

Navigate into each of the screens and paste the code below.

Ensure you are defining and exporting the correct screen based on the file name:

Let’s make use of the react-native-elements package for the styling and icons.

Next, you’ll find these packages installed already. Run npm i.

We would be making use of both top and bottom navigators. Import them along with the first and second screen in the appTabNavigator.js file. We would also be needing icons for the bottom tab. Let’s import it from react-native-vector-icons, which is preinstalled along with Expo. Our bottom tab navigation also makes use of icons. Let’s also import icons from react-native-vector-icons.

The second screen contains the top tab navigator, so let’s handle that.

Here we made the background the color of the UI, and changed the active and inactive state of each tab. Please refer to the documentation of each navigation type to see the list of options available for configuration. The initialRouteName props is what the navigation component would use to identify the specific screen we want to navigate to. This must be unique for all screens.

The instance of the top tab navigator also gives us a Screen component that connects our defined screens to the navigation wrapper. It can take various props, one of which is the component which holds the screen, and the name which serves as a unique identifier for each screen. Refer to the documentation for other configuration options.

Go to index.js and paste this to see a working demo of what we have now. We’d revisit this file to understand what’s happening in a short while:

Also replace the code in your App.js file with this:

Now you should be able to see this once you run your project using Expo start:

Move to the tab-navigation branch to see the complete code.

Import the needed packages and create an instance of the drawer navigator:

Import it in the navigation/index.js file and replace the AllScreenTabNavigator with AllDrawerNavigation to see it in action.

Checkout to the drawer-navigation branch to see the complete code.

The final screen is the stack navigator.

Import the needed dependencies and create an instance of the stack navigator:

Connect the ThirdScreen through the instance of the StackNavigator created above and export it:

Replace the AllDrawerNavigation in index.js with the exported ThirdScreenNavigation to see it in action.

Checkout to stack-navigation branch to see how it works.

Now let’s combine all navigators. This would be done in the index.js file. Before we proceed, let’s make some major improvements to our screens by exporting the shared UIs between them into a separate component called Layout.js.

In the component directory, create a Layout.js file:

We moved the shared UI between the screens into a separate file. The Layout component is expected to have a name prop. We are destructuring from the props and passing a default value to it, incase no name is passed to it.

Replace all the code in your return statement in the screens with this:

Now let’s combine all our navigators.

Checkout the pre-combined-navigation branch to follow up from here.

Let’s think about how the app is structured. The first and second screens are tab navigation types that contain the entry into a stack navigation type for the third screen.

This screen also provides an entry to the fourth and fifth screens, which are drawer navigation types. From the look of things, it’s obvious that all 5 screens are connected by a common navigation type: the stack navigation.

Import createStackNavigation and paste the code below:

Go to the App.js file and replace the code there with this:

In the FirstScreen, log the navigation and route objects passed to us from our navigation wrapper.

The navigation object has methods and events that make transitioning between screens possible, while the route object contains information about our screens and shared states between screens, if any (params). 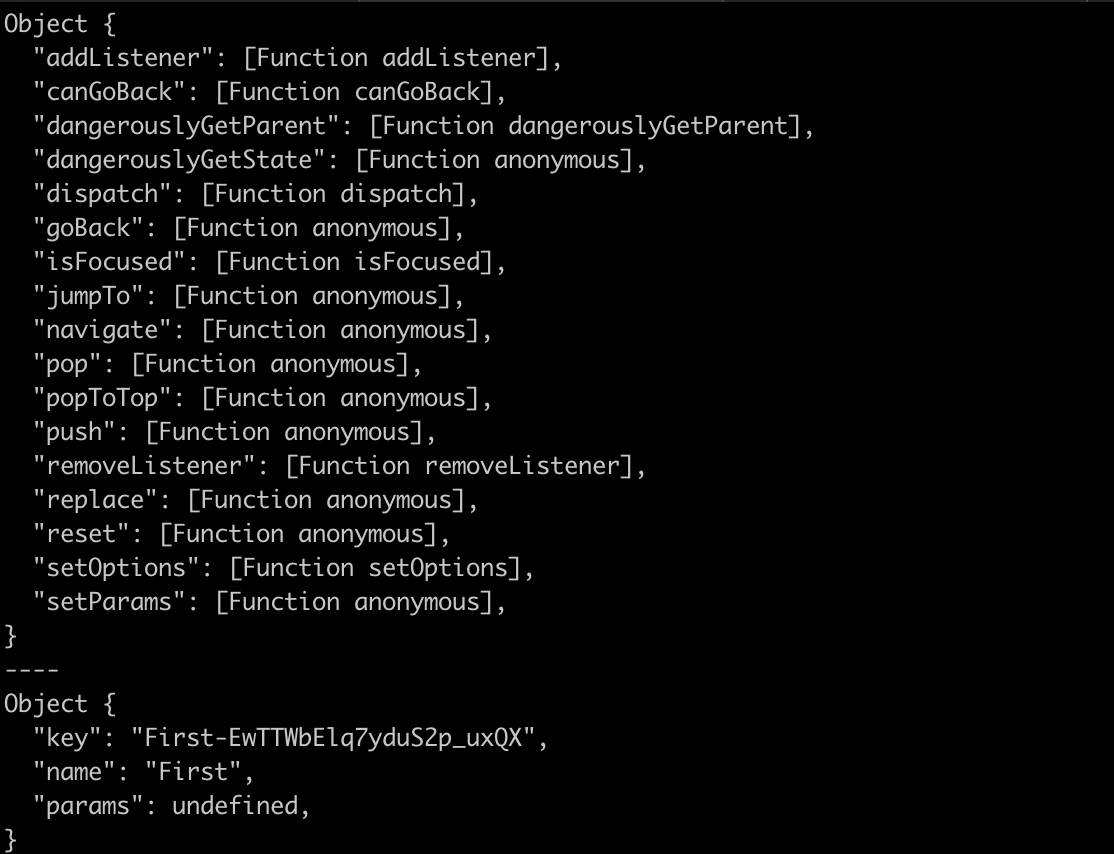 Pass the route.name key on the route object to the Layout component. The navigation props would be used to move to other screens. If you log both objects, you would see this. We won’t cover all of them, but we’d cover a few we need to move between different screens.

The navigate method is used to move to another screen.

The goBack method is used to move to the previous screen.

setParams is used to pass parameters to other screens. An example is passing the id of a post to get the comments of that post on the comment screen.

The name value on the route is the name given to the screen.

The params passed between screens can be gotten on the route object.

Let’s add a button in the first screen to move to the third screen, at the top of the file, add:

Below your layout component, add:

We pass the label we gave to the third screen when combining our screens to the navigate method on the navigation object.

We have successfully covered creating screens and navigating between them in React Native. This guide has armed you with most of the knowledge and tools you need to build simple and complex navigation for your project. Remember, defining and structuring the navigation should be part of the first things you work on.

Do you have any questions? Is there something you would have preferred I covered? Feel free to leave a comment.

2 Replies to “A complete guide to React Navigation 5”