Angela Fabunan Follow Angela Fabunan is the author of two books. She writes about UX design, travel, SEO, and Content Marketing. She is a multi-awarded poet known in small circles for her work on diasporic literature, women’s literature, and 20th Century Philippine Poetry in English.

Designing a landing page with the UX rule of thirds 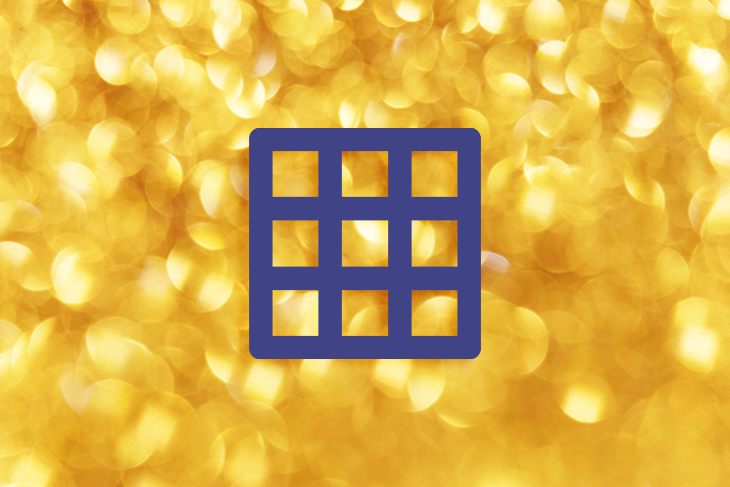 The rule of thirds is an old rule from artists dating back to the 1700s. And yet, its simple application holds preeminence in modern day marketing designs and is used by graphic artists everywhere you look.

All humans are drawn to the center of a composition, such as a webpage or an image. But that doesn’t mean just putting an image in the center of everything. In this article, I’ll take a deep dive into the rule of thirds. We’ll see where this design theory came from, how it’s used, and how brands such as Nike, Amazon, and Apple use this rule.

It’s more than a handy-dandy trick on your phone. Ready? Let’s dive in.

What is the rule of thirds?

The rule of thirds is used in web design to create balance within the images or other elements of the landing page. Its main principle is that if elements on the page reside within a third of the page, then it is more aesthetically pleasing to viewers than if it was zoomed-in and centered, for example.

You can then place your relevant image or relevant text at every intersection of these columns and rows. Or, alternatively, you can also use each of the nine boxes to place your image or your text.

We’ll talk more about this as we go along.

The history of the rule of thirds

We can’t talk about the rule of thirds without first talking about proportions. Proportions, generally speaking, is the theory that objects have a relationship to each other (micro) and to the whole (macro).

The rule of thirds is a vital part of art and design theory. The first person to theorize fully the rule of thirds was John Thomas Smith in the eighteenth century. In his book published in 1797, Remarks on Rural Scenery, he says:

“In short, in applying this invention, generally speaking, or to any other case, whether of light, shade, form, or color, I have found the ratio of about two thirds to one third, or of one to two, a much better and more harmonizing proportion, than the precise formal half, the too-far-extending four-fifths — and, in short, than any other proportion whatever.”

Some say the Rule of Thirds have existed since antiquity, but John Thomas Smith was the first to ever record in written language, making his work a foundational one for artists.

As you can see in the previous quote, the rule of thirds is primarily about proportion, and making sure your creation, something as vital as a landing page, is aesthetically pleasing and harmonizing to the naked eye.

The Rule of Thirds has gone on long after John Thomas Smith to become one of the most important “Fundamental Principles of Design”–along with The Golden Ratio, and The Rule of Proportions.

Where you find the rule of thirds

First, take a look at your iPhone. Open the Camera Options, and under Composition, turn on the grid option. The grid that overlays the image on your camera’s screen is based on the rule of thirds theory. 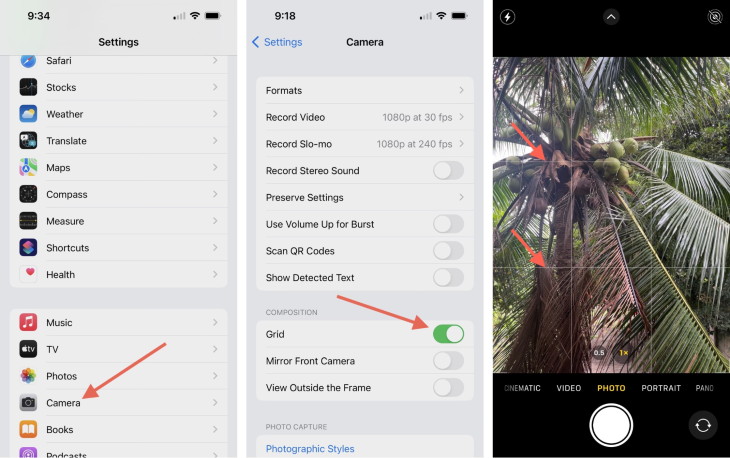 If you’re here, you’ve learned about the rule of thirds already. So how to actually apply it to your landing page? Here’s how to convert viewers into leads with this design rule.

Use a basic grid layout

In order to apply the rule of thirds to a landing page, you must use a grid design. Remember that the grid design is overlaid on top of both the entire landing page, and each element or each image. Where the eye lands first is, naturally, at the intersections. But, not each intersection has the same effect on the viewer.

Knowing this information about the rule of thirds will significantly get you ahead of the game when it comes to gridding the most important information on your page first, middle, and last.

You must use the grid for the whole landing page. Then, for each element: each image, each CTA, each marketing message, each product description, and so on.

Use intersections of the grid layout for important information

If you have a catchy headline/slogan and you want that seen first, put it directly at the top left intersection. If you want to overlay an image, put the center of the image directly on the 20 percent intersection.

You can also not use the intersections and create your landing page into nine sections. One way that I’ve seen most websites do this is

Examples of the rule of thirds from famous brands

All of Nike’s images use the rule of thirds. On their localized homepages, they use a combination of product photos, CTAs and headlines to show their most coveted footwear designs. One of their images uses a photo of people on two vertical rows, with a product photo of a sneaker in closeup on the right vertical row. The sneaker resides on the 20 percent intersection, while a headline with the brand name is overlaid on the photo of users on the 41 percent intersection.

Their homepage is cut into thirds as well, not just their images. At every thirds’ intersection, you can see how Nike uses the rule of thirds to showcase their branding messages, their product photos, their varying descriptions, and their CTAs, in their order of priorities. 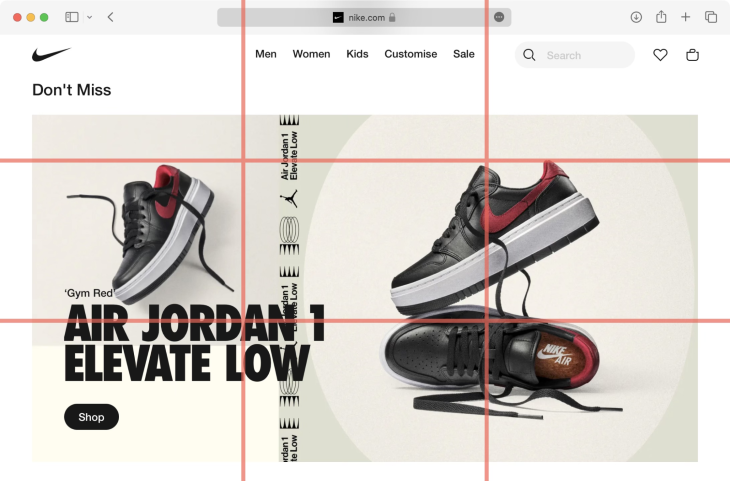 Amazon uses the rule of thirds strictly on their homepage. This is because, as a mass marketplace, they want their consumers to be able to empathize with their brand. By being able to show their consumers all the hottest products they offer in an organized and visually-appealing design, Amazon can grow their authority as a mass marketplace that caters to all. And, by being able to click in detail on each offering as it zooms by on the page, consumers can more conveniently personalize their experience. 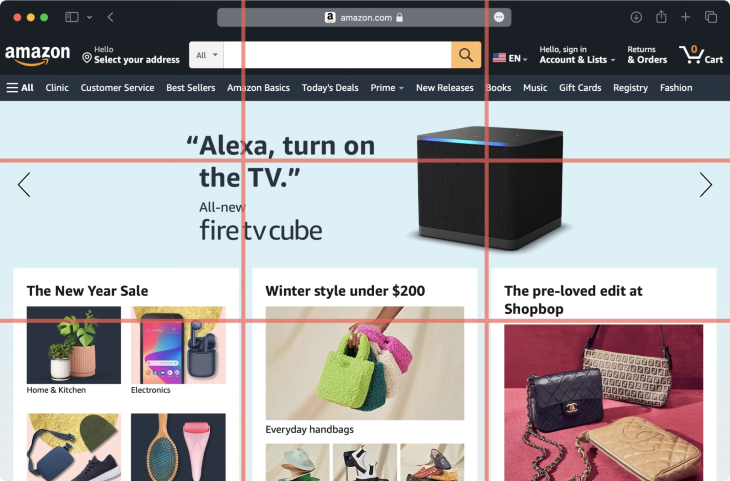 Apple’s ingeniousness shows in their UX design, making them a force to be reckoned with in marketing. And yet, Apple uses the rule of thirds on their landing page, too.

On their iPad landing page, they have 21 horizontal rows in the whole landing page, which they’ve cut into two columns. But these two columns consistently have their products side by side, with the center of their images residing on the intersections of three columns. It’s not as obvious as Amazon, for example, but it’s still the rule of thirds. 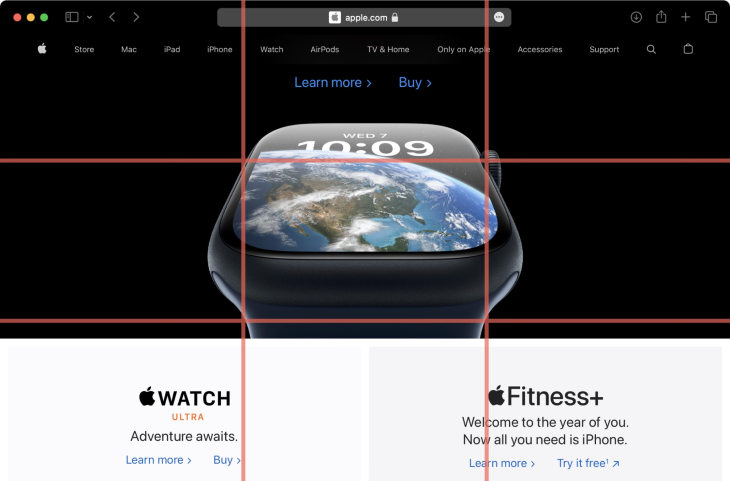 When not to use the rule of thirds

As you can see, the rule of thirds is very reliable. It’s a tried-and-true way to create readability for a webpage and visibility for brands. And because of its predominance on the net, how often it’s been used, and for how long, it’s already trained visitors to expect different elements in the same place on a visual level. As we scroll, we expect things to be in more or less the same places with every page we scan.

If the landing page itself has elements that are incompatible with the rule of thirds, you can let go of it. For example, if you want to showcase your film, it might be better if you use two horizontal rows only. For your photography website, maybe you want a centered image. Maybe you just want to experiment and have enough knowledge for it.

So, if you have a good grasp of design, go ahead and do what you feel fits the medium. Just make sure to use the other principles of design, such as proportions or even the Golden Ratio.

Here are three takeaways I hope you’ve learned by browsing through this:

Angela Fabunan Follow Angela Fabunan is the author of two books. She writes about UX design, travel, SEO, and Content Marketing. She is a multi-awarded poet known in small circles for her work on diasporic literature, women’s literature, and 20th Century Philippine Poetry in English.
« Applying SOLID principles to TypeScript
Creating visuals with react-native-masked-view »