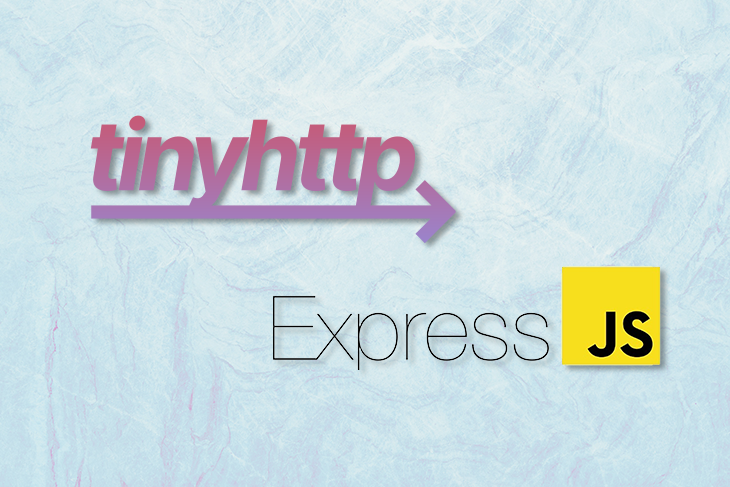 In this guide, we’ll compare one of the most commonly used frameworks for building web applications with Node.js, Express.js, with tinyhttp, one of its most popular alternatives.

tinyhttp is a modern web framework similar to Express.js that is written in TypeScript. It uses a very minimal amount of dependencies compared to Express.js, which makes it super fast.

tinyhttp delivers routing, req/res extensions, and much more, all while depending on only six modules — four of which are tinyhttp’s own.

tinyhttp also supports async/await for routes, which is not the case in Express.js. There are proper typings and a function checker inside tinyhttp, which resolves async functions. In other words, both sync and async work fine in tinyhttp. Check out these async and MongoDB examples to see how to make async handlers.

Here is a short list of the most important features of tinyhttp, according to the official docs:

Express.js is a flexible Node.js framework that provides a robust set of features for web and mobile applications. Creating robust APIs is very easy because Express.js comes with lots of middleware and other in-built support.

Express.js doesn’t come with a database; this is left up to third-party modules, which allows you to interface with nearly any database. Express.js supports myriad template engines that go with the (path, locals, callback) signature.

This framework is built in such a way that it acts as a minimal and flexible Node.js web application framework, providing a robust set of features for building single, multipage, and hybrid web applications.

Some features of Express.js:

tinyhttp vs. Express.js: A basic comparison

Some notes on the table above:

With the basics out of the way, let’s look at a performance report using the fastify benchmarking tool. Here we use parameters as req/s, transfer/s, and latency to measure the performance of both frameworks.

Below are some notes on the hardware, system, and conditions used for this benchmark.

req/s is number of requests per second. Latency refers to the delay between a user’s action and a web application’s response to that action, also referred to as total round-trip time.

From the table above, we can see that tinyhttp is capable of making more transfers per second with lower latency than Express.js v4

Note: Benchmarks aren’t completely accurate and may be different on every run and on every machine. The key is to compare proportions instead of absolute values.

To conclude our performance benchmark, tinyhttp (without extra req/res extensions) is ~1.9 times faster than Express.js.

tinyhttp and Express.js in action: A simple example

Now it’s time to build a simple example app so we can see tinyhttp and Express.js in action side by side.

You can use any package manager to install tinyhttp and Express. I will use npm for demonstration.

Express.js and tinyhttp app are structured quite similarly. If you know Express.js, then you also know tinyhttp.

You probably noticed that instead of require, we used ESM imports. tinyhttp is designed to be used with Native ESM. Unlike Express, tinyhttp is compiled to both ESM and CommonJS module systems. Meanwhile, somehow, it’s still much smaller than Express.js.

You can use import/export syntax in Node.js with it. To set up a Node ESM package, put "type": "module" in the package.json file, like this:

Another option is to use an .mjs extension. That way, you don’t need to put that "type" field in package.json. For more information, check out the ECMAScript Modules Node.js documentation.

Because the most popular Express.js middleware also uses outdated modules, tinyhttp provides a set of its rewrites/remakes of popular wares, such as logger, session, and so on.

Now let’s walk through how to handle some basic routing in both tinyhttp and Express.js. Express.js contains a lot of helper functions in their req and res objects. tinyhttp fully implements Express.js APIs using methods such as res.send, res.download, res.redirect, and so on.

tinyhttp is fast and light, and you can start using it today for backend applications. The tinyhttp repository contains a lot of examples, including MongoDB and GraphQL integrations. I would recommend using tinyhttp when you need to quickly get started with bare-minimum code.

That said, Express.js is still popular and will continue to be used in major projects and industries because of its wide open source community support and easy learning curve.