The latest features in Next.js 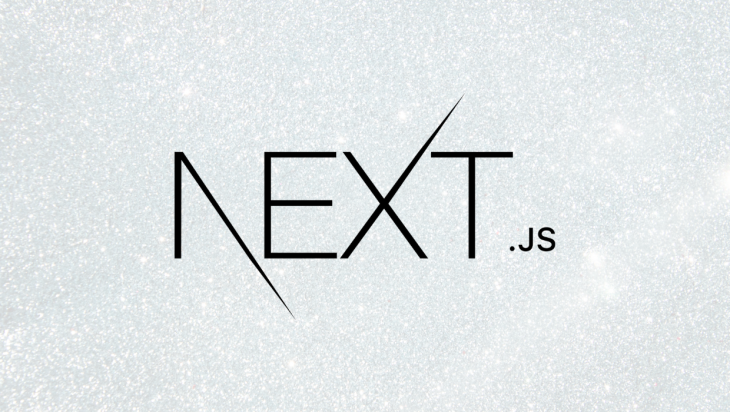 In the context of SSR (server-side rendering) and static site generation in the recent past, Next.js has built up a reputation that we cannot deny. In a short duration of a few years, it has become a go-to framework when it comes to hosting static sites like landing pages, documentation, and blogs. In this article, let’s look at the major enhancements that got added to the framework as a part of their latest major release versions, Next.js 9.3 and Next.js 9.4.

Next.js is a hybrid framework, which lets us choose between static generation (SG) or server-side rendering (SSR). With Next.js 9.0, we saw the introduction of automatic static optimization which depended on the data-fetching method getInitialProps() to decide whether a page must be rendered as HTML at build time. But that has now been pushed to the next (pun intended) level by adding two new data-fetching methods getStaticProps & getServerSideProps. There’s also a getStaticPaths introduced to generate static pages for dynamic routes. Here’s how that works.

This is predominantly meant to enable static generation for your sites and configure the async data fetch to happen at build time (in the server context). Just export an async function called getStaticProps from your page and return an object with a props key from inside of it, which will get passed to the page as props:

Next.js will then pre-render that page at build time by calling this function in the Node.js context. The benefit here is that we can fetch data using any method (even directly accessing a database) as this code will never run on the client-side. 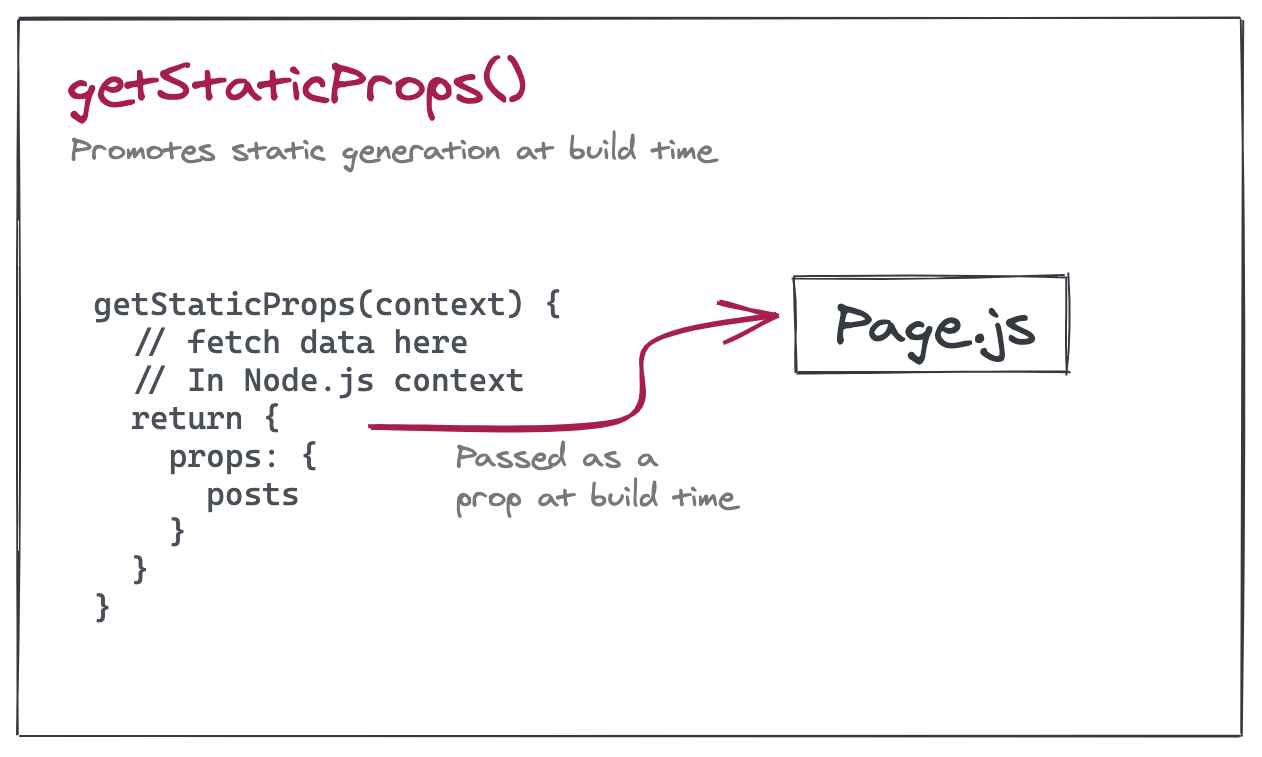 This is used in conjunction with getStaticProps when dynamic paths are used in order to define a list of paths that are to be static rendered at build time.

Export an async function called getStaticPaths from your page that contains dynamic routes and Next.js will statically pre-render all paths specified by it:

If the page uses dynamic routes named pages/posts/[id].js, exporting [{params:{id:1}},{params:{id:2}}] as the paths array will result in statically generating post/1 and posts/2 at build time. 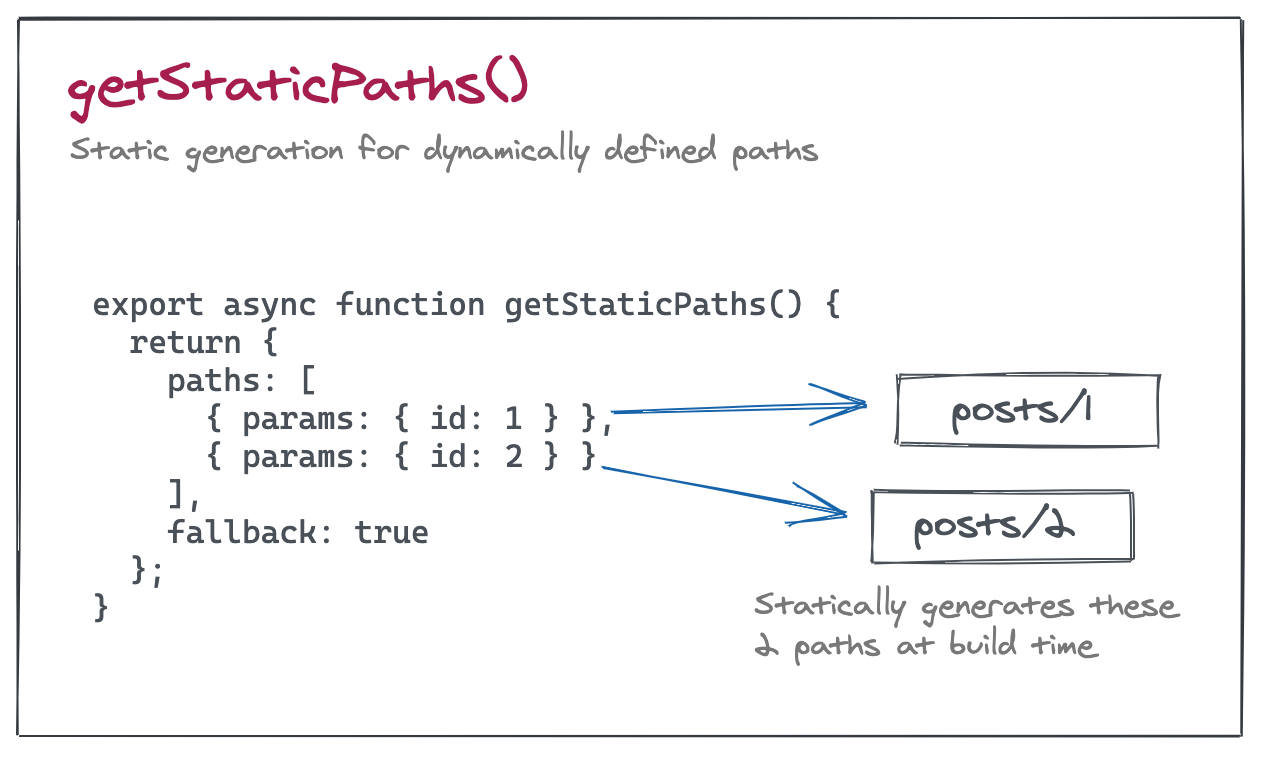 Also, notice the fallback key being passed. If the value of fallback is false, then any path not returned in the getStaticPaths array will result in a 404 page error.

This is used in a page to render the page on every fetch (SSR). While navigating using next/link, a request is made to the server, getServerSideProps is executed and results are returned back to the frontend. The returned result is passed to the page as props: 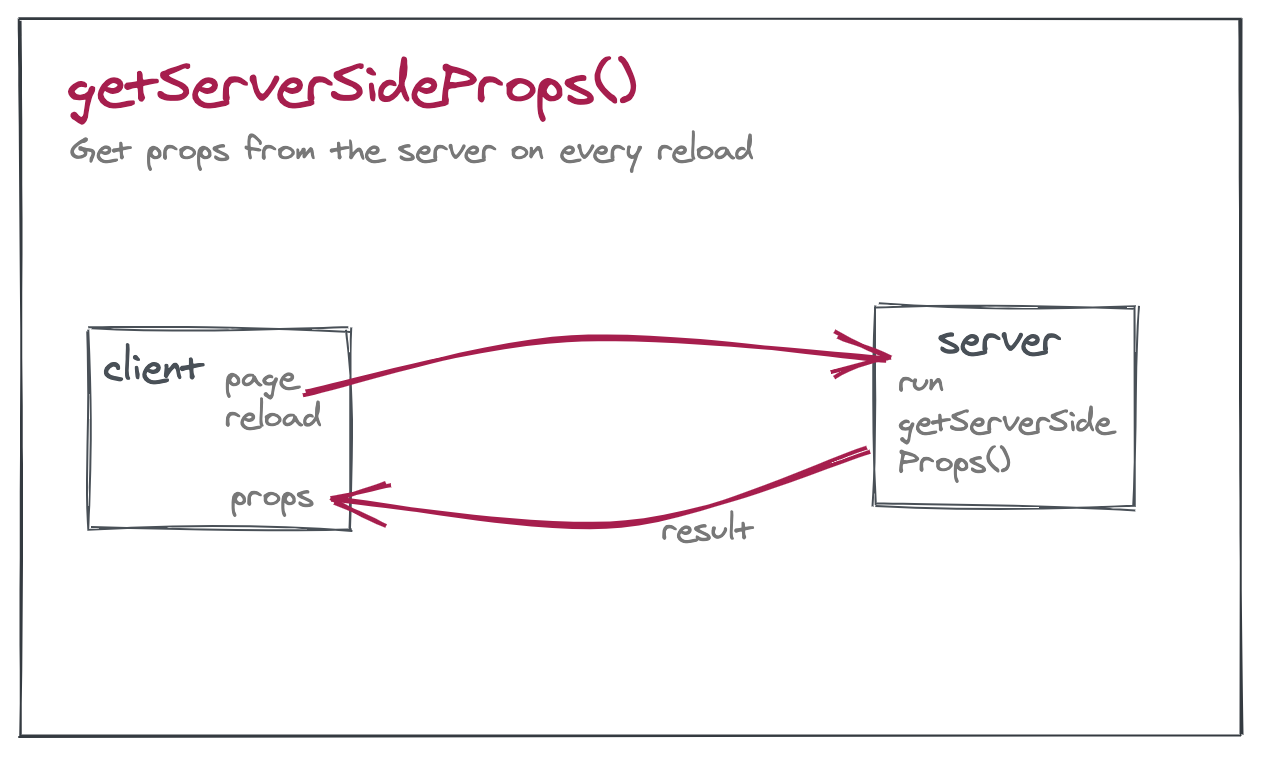 A direct result of introducing getStaticProps and getServerSideProps is that conditional, on-demand rendering becomes possible with it.

A use case for preview mode is when you are working with a draft version of your CMS and want to preview the server-side rendered version of that instead of the statically generated output. 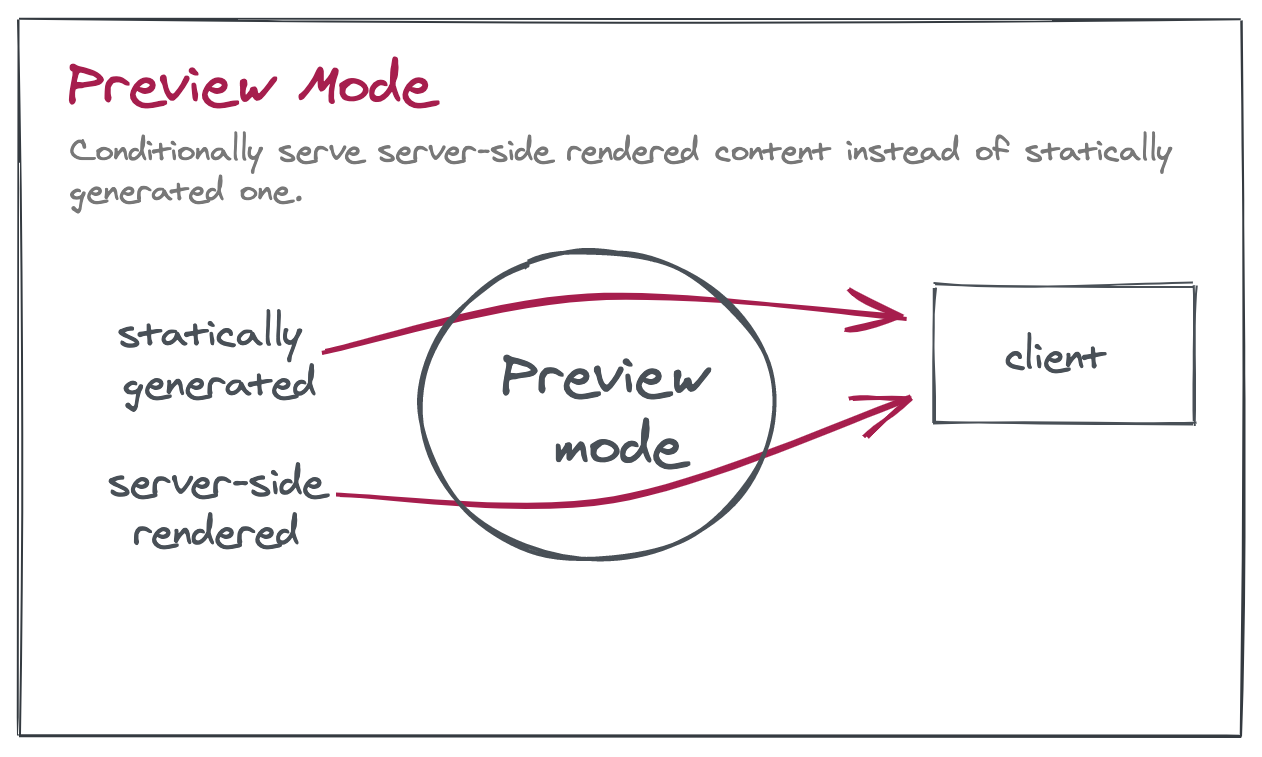 Before the Next.js 9.3 release, developers used next-sass in order to use SASS stylesheets, but now, Next.js supports SASS out of the box. In order to use it, do npm install sass, then, create a standard .scss file and then import it into the pages/_app.js.

From Next.js 9.3 onwards, it is now possible to define styles in the form of Global SASS as well as CSS Modules. The global styles can be used as above whereas component level styles can be defined by naming them as [name].module.scss. Modules avoid class name conflict by automatically generating unique class names. 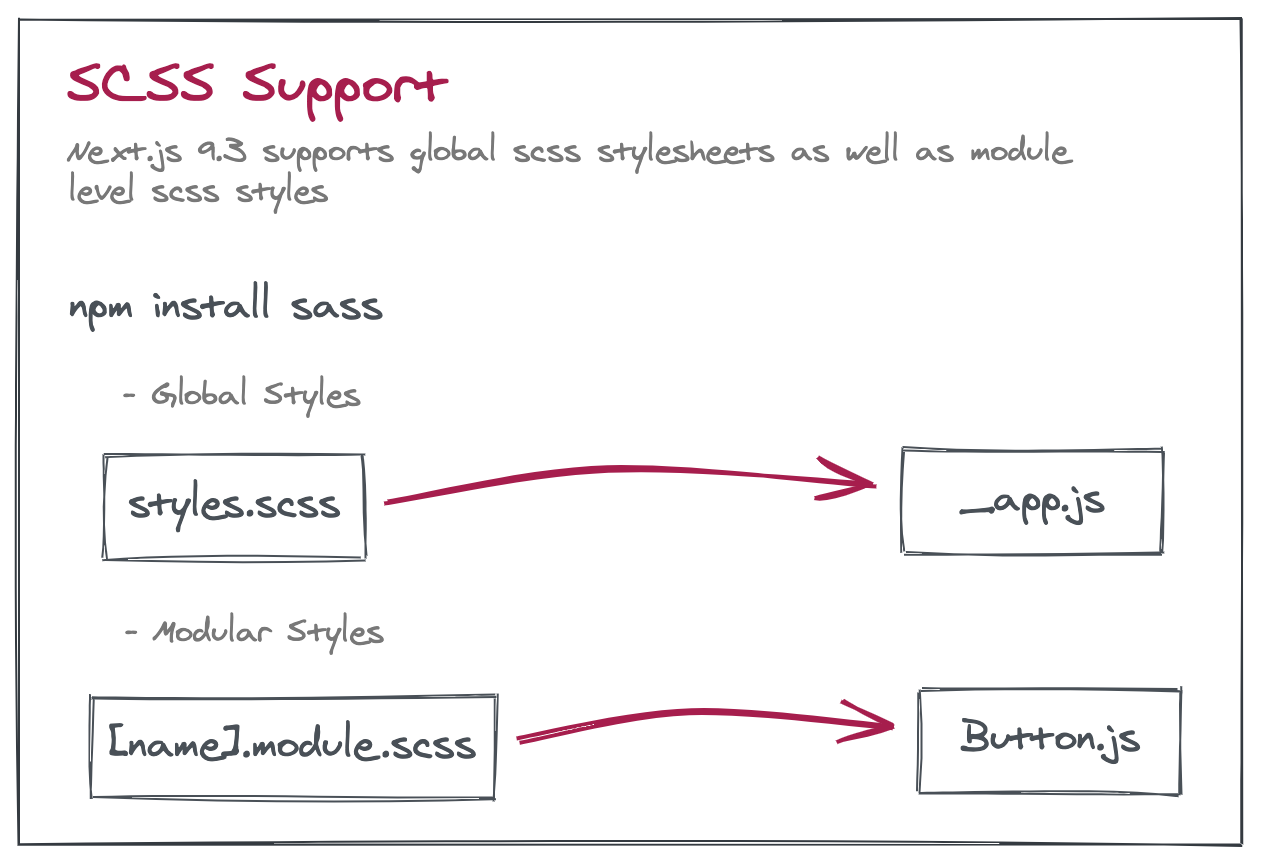 If a custom pages/error.js is not defined, Next.js will automatically, statically generate a 404 page and serve it whenever required. If the user needs to customize the error page, it can be done by creating a custom pages/404.js that will, again, statically be optimized at build time.

What this means is that Next.js will now only update the code file that got edited and rerender just that component, without losing component state. Other updates that also enhance the developer experience include:

In the earlier versions of Next.js, it was pretty confusing for the developer to know if a particular environment variable is available only in the Node.js environment or also included in the browser bundle but that is solved with Next.js 9.4. Now, appending an environment variable with NEXT_PUBLIC_ makes sure that it will be inlined into the browser JavaScript bundle. Also, Next.js supports .env loading by default.

The fetch API which is used to make REST requests was polyfilled in the browser environment in the earlier releases. Now, in Next.js 9.4, fetch() is also polyfilled in the Node.js environment. That means, for the code that executes on the server side, the developer no longer needs to include third party libraries like node-fetch or isomorphic-fetch.

This is another one of those enhancements which were created to make the life of the developer a little less difficult. When nested deep into a component, in order to use any other piece of reusable code appearing higher up in the tree, the developer often ends up using this kind of syntax:

If the shared folder existed right in the root of the application, the developer should be able to access it like this:

After which, the component can be imported using this syntax:

In conclusion, the latest releases of Next.JS 9.3 and Next.js 9.4 have brought in significant improvements in all aspects. Right from core performance like static generation, server-side rendering, conditional preview mode to the surface level improvements. In terms of SASS support and developer experience improvements like fast refresh, env variable support, and absolute imports makes these new releases worthy of an upgrade. So if you are running an earlier version, do consider an update.