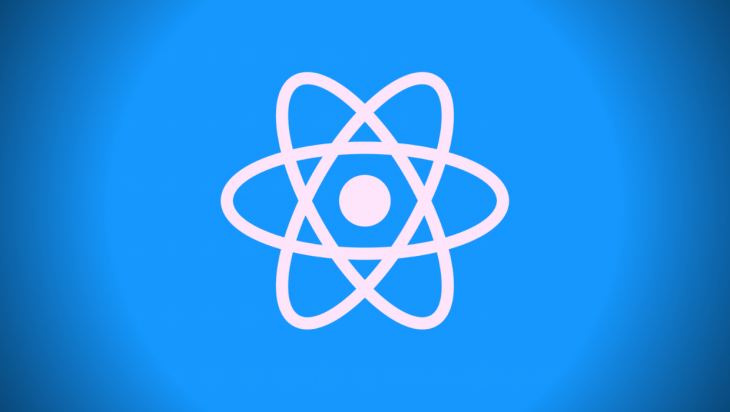 It’s no secret that Enzyme has become the de facto standard for React components testing, but there are other good options around.

I personally like Test Renderer because of the way it works: it renders React components into pure JavaScript objects that are easy to use and understand.

Another advantage of React Test Renderer is that it is maintained by a core team at Facebook and is always up to date.

React Test Renderer has a great documentation, so I won’t duplicate it. Instead, I’d like to illustrate a few of the most common use cases in an example with a test-driven development (TDD) approach.

Ordinarily, we’d need a component in order to start writing a test, but React Test Renderer enables us to write a test before the component is implemented.

Note: The reason for this is that TDD works like a charm when you test functions, so taking into account that most of the React components are pure functional components, TDD is applied really well here, especially with React Test Renderer.

Sometimes it’s even faster to write your component starting with tests in case of complex logic because you need fewer iterations and debugging.

Let’s consider the requirements for a simple component:

First, we need to test the class of an empty component (as we follow TDD):

Let’s skip over the more in-depth explanation of that for now and focus on fixing the test. At first, it will break (as expected):

That means we need to add some node with some type. In our case, the type should be <div>:

Once we change the code, the file watcher runs the test again and we receive an updated message:

We’re already asserting. To pass the first test, all we need to do now is add a className prop:

After this change, we’ll see that rewarding green message:

As soon as the test is green, we can slow down a bit and revisit the code of the test line by line. Here’s that code again:

[ 1 ] Test Renderer has only one way of creating a component — the create method — so just import and use it.

[ 2 ] When creating a component, getting a test instance is a standard boilerplate code for React Test Renderer.

[ 3 ] There are two main ways to query for an element in Test Renderer: by type and by props. I prefer querying by type when there are no other containers around, as in the current example. We’ll get to other methods a bit later.

[ 4 ] This assertion is pretty self-explanatory; just check that the className prop value includes btn-group and you’re good to go.

Let’s continue adding functionality to the BtnGroup component we already have since we know we need to meet the following requirement:

It should be able to render its children.

Testing the children prop is very straightforward. We just need to make sure that the passed value matches the result rendered:

[ 6 ] The value we pass to the component and the value we use to assert against it should be the same.

Since we’re using TDD, you might expect the test to break here. However, React supports passing children to components out of the box, so our test will be green.

If you’re wondering if the test is running successfully, you can print the element value with console.log.

The output is as follows:

Let’s continue adding requirements for our components: it should render any props passed.

Now, the test will break and issue the following message:

What happens now is that we need to actually start passing props. Otherwise, btn-group will always be there:

Here’s where having tests comes in handy. We have another message telling us that the className case is specific:

Now, the passed props replace the props that our component already has; in our case, btn-group is replaced with mb-3.

We should change the code of the component to fix this so that it handles className differently:

The trick here is to destructure props so that items needing special treatment have their name and all other props consolidated into a rest object.

Again, there is no special approach needed for the children prop, although they’re passed now as a regular prop instead of in the body of the component.

Now, the test should be green again. All of the previously written tests will also be green: 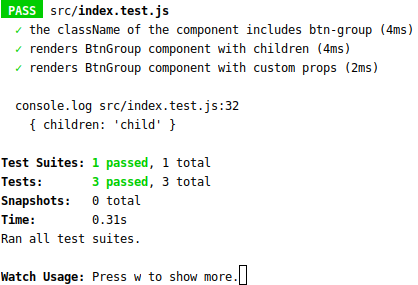 Note: I left a console.log here to show how you can check the output at any time.

As you can see, all of the assertions we’ve done — for now — are just checks that strings match. But if there’s a need to check the number of items, we can use this handy method in Test Renderer: testInstance.findAllByType().

Let’s see how it works.

Testing the number of items

To demonstrate how to count items in React Test Renderer, we should have some component that renders an array or a list. So, the requirement would be that the component should render a list with correct items count.

To follow TDD, we’ll start with an empty functional component that renders an empty ul tag:

Here’s a test we could write:

Initially, the test will break with the following message:

To fix the test, we should render list items with li tags inside the container:

Now the test is green and we can talk about the code.

[ 7 ] To query specifically for nodes with type li, I use the testInstance.findAllByType() method that returns all elements with tag li.

In most cases, having a test for only item count is not sufficient, and you’ll also want to test the actual text a user can read.

There’s no specific functionality in React Test Renderer for that purpose, but that’s pretty easy to write if you consider that text can only be found in children.

Having a list of all items in [ 8 ], we can iterate over the nodes of the component and make sure that every text was found [ 10 ].

This test is instantly green as soon as the component doesn’t have any filtering or sorting logic inside and just renders a list as it is, so we don’t have to change any lines of code in the test.

The only nit to add here is that rendered text is always a string, regardless of the value type you pass [ 11 ].

Some of the functional components rely on more than just props and have their own state management thanks to the Hooks API. Consider a classic example of a toggler component with the following requirements:

That means that children visibility should change on click.

Here’s an example of a test you could write:

The test looks huge, so let’s not try to fix it right away. First, let’s discuss the code a bit.

[ 12 ] Here is one new thing happens: the act() method is used to wrap event handler calls.

Why should we? And how should we remember to do so? The second answer is easy: no need to remember, because React Test Renderer checks the code and prints a warning with a reason.

When writing UI tests, tasks like rendering, user events, or data fetching can be considered as “units” of interaction with a user interface.

React provides a helper called act() that makes sure all updates related to these “units” have been processed and applied to the DOM before you make any assertions from the docs.

In other words, an act() method “waits” for React updates and makes otherwise async code look synchronous, very similar to await from ES7.

At this stage, the test can’t find a button and breaks:

To resolve this issue, let’s add a button:

The button exists, but the onClick method is not found:

Don’t forget to add a button:

This is the next message you’ll receive after adding an onClick handler:

Finally, we’re at the point where we’re ready to add some state management with Hooks:

All tests should be green now. You can find the complete source code for this example here: 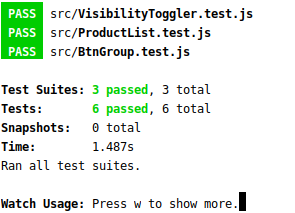 Although React Test Renderer is usually associated with snapshot testing, it can still be used to make specific assertions against your components with sufficient accuracy for most common use cases.

I personally like it because it has a clean API, it’s simple, and it’s easy to use along with TDD. I hope you like it, too!