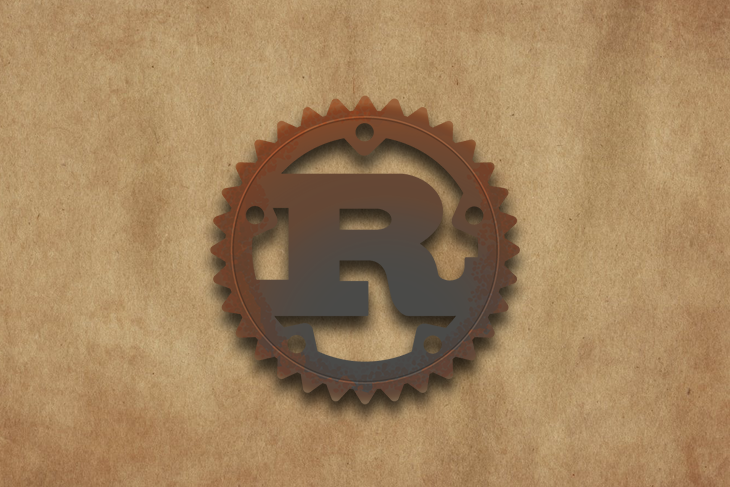 Developers can use conventional pointer methods when managing data on Heap or Stack. However, using these pointer methods comes with downsides, such as causing memory leaks when dynamically allocated objects are not garbage collected in time. The good news is that better memory management methods that automatically handle garbage collection with no runtime cost exist, and they are called smart pointers.

Rust is an open source, low-level, object-oriented, and statically typed programming language with efficient memory management that ensures high performance and security. It has a wide range of features that many organizations use to build highly secure and robust applications, including web, mobile, game, and networking apps.

This article will give you an understanding of what smart pointers are, their use cases, and their implementation in Rust. The included code example will teach you about Rust’s various types of smart pointers.

What are smart pointers?

Smart pointers are abstract data types that act like regular pointers (variables that store memory addresses of values) in programming, coupled with additional features like destructors and overloaded operators. They also include automatic memory management to tackle problems like memory leaks.

When a developer links memory that contains dynamically allocated data with smart pointers, they are automatically de-allocated or cleaned up.

Some smart pointer use cases include:

How smart pointers work in Rust

Rust achieves memory management through a system (or a set of rules) called ownership, which is included in an application’s program and checked by the compiler before the program successfully compiles without causing any downtimes.

With the use of structs, Rust executes smart pointers. Among the additional capabilities of smart pointers previously mentioned, they also have the capability of possessing the value itself.

Next, you’ll learn about some traits that help customize the operation of smart pointers in Rust.

Therefore, the Deref trait simply customizes the behavior of the dereferencing operator.

Below is an illustration of the Deref trait:

The function in the code block above implements the following:

The screenshot below shows the output of the code:

The Drop trait is similar to the Deref trait but used for destructuring, which Rust automatically implements by cleaning up resources that are no longer being used by a program. So, the Drop trait is used on a pointer that stores the unused value, and then deallocates the space in memory that the value occupied.

To use the Drop trait, you’ll need to implement the drop() method with a mutable reference that executes destruction for values that are no longer needed or are out of scope, defined as:

To get a better understanding of how the Drop trait works, see the following example:

The screenshot below shows the output of the code:

Types of smart pointers in Rust and their use cases

Several types of smart pointers exist in Rust. In this section, you’ll learn about some of these types and their use cases with code examples. They include:

The Rc<T> stands for the Reference Counted smart pointer type. In Rust, each value has an owner per time, and it is against the ownership rules for a value to have multiple owners. However, when you declare a value and use it in multiple places in your code, the Reference Counted type allows you to create multiple references for your variable.

As the name implies, the Reference Counted smart pointer type keeps a record of the number of references you have for each variable in your code. When the count of the references returns zero, they are no longer in use, and the smart pointer cleans them up.

Type the following code in your favorite code editor:

After you run the code, the result will be as follows:

In Rust, data allocation is usually done in a stack. However, some methods and types of smart pointers in Rust enable you to allocate your data in a heap. One of these types is the Box<T> smart pointer; the “<T>” represents the data type. To use the Box smart pointer to store a value in a heap, you can wrap this code: Box::new() around it. For example, say you’re storing a value in a heap:

From the code block above, note that:

In addition, you can easily dereference the data stored in a heap by using the asterisk (*) in front of hp_data. The output of the code will be:

RefCell<T> is a smart pointer type that executes the borrowing rules at runtime rather than at compile time. At compile time, developers in Rust may encounter an issue with the “borrow checker” where their code remains uncompiled due to not complying with the ownership rules of Rust.

Binding a variable with a value to another variable and using the second variable will create an error in Rust. The ownership rules in Rust ensure that each value has one owner. You cannot use a binding after its ownership has been moved because Rust creates a reference for every binding except with the use of the Copy trait.

The borrowing rules in Rust entail borrowing ownership as references where you can either have one/more references (&T) to a resource or one mutable reference (&mut T).

With RefCell<T>, both mutable and immutable borrows can be checked at runtime. So, if you have data with several immutable references in your code, with RefCell<T>, you can still mutate the data.

Previously, in the Rc<T> section, you used an example that implemented multiple shared ownerships. In the example below, you’ll modify the Rc<T> code example by wrapping Rc<T> around RefCell<T> when defining the Cons:

The code above implements the following:

Note that if you do not include the #[derive(Debug)] as the first line in your code, you will have the following error: 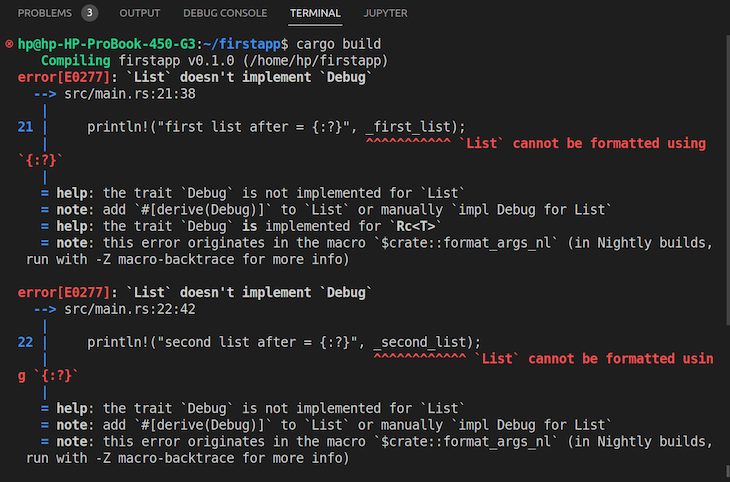 Deborah Emeni Follow I'm a software developer and technical writer who specializes in Node.js and JavaScript.
« Building forms with SwiftUI: A comprehensive guide
Firebase vs. Supabase: Choosing the right tool for your project »