Learn these keyboard shortcuts to become a VS Code ninja 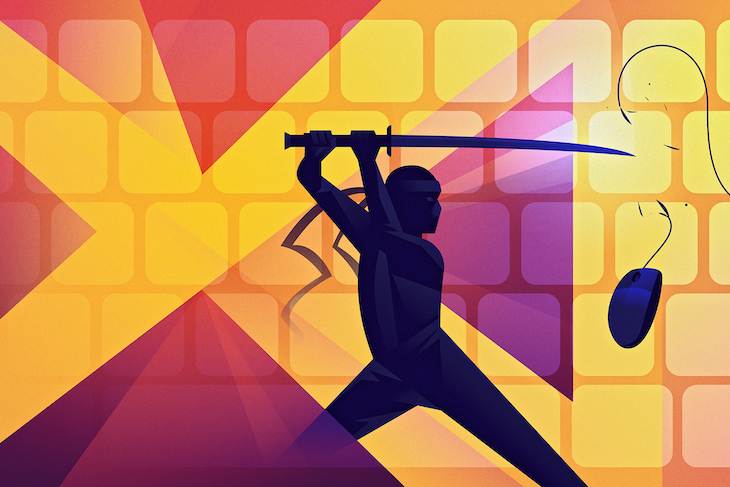 Recently, I wanted to limit mouse usage when programming in Visual Studio Code since I found interacting with the IDE through a cursor distracting and a major flow-breaker — so, I tried navigating VSC with keyboard alone.

Here, I would like to present some of the shortcuts that I have found to best increase productivity. Go ahead, open Visual Studio Code and let’s get started.

Unless you are working on a very small screen, chances are you split your IDE into two or three views to switch more smoothly between files. 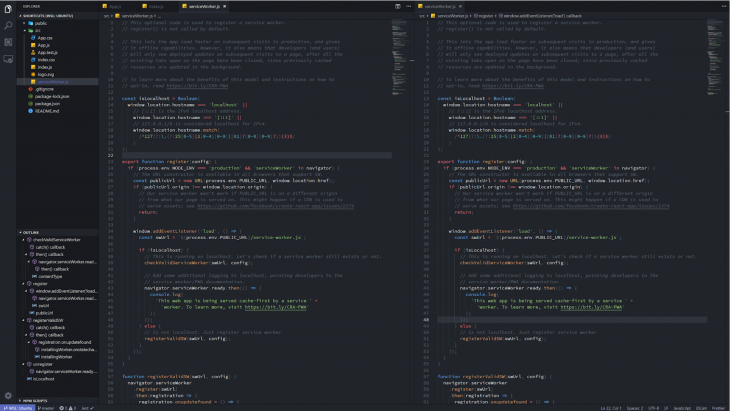 There’s no limit to how many times you can split the editor, but I doubt you will ever want to have more than three views open; it is just not practical beyond that. You can switch between views using ctrl + 1 (⌘ + 1), ctrl + 2 (⌘ + 2), and so on. Alternatively, you can switch between tabs (and, by extension, between views) using ctrl + page up / page down (⌘ + page up / page down).

To focus the explorer panel we use ctrl + 0 (⌘ + 0). We navigate the panel using the up and down arrows. Using the enter key, we open a selected folder or file.

By default, there are two views: the explorer panel and the code view. The code view can be focused by using ctrl + 1 (⌘ + 1). If we create more views by splitting the editor, we use ctrl + 2 (⌘ + 2), ctrl + 3 (⌘ + 3), and so on for the respective views. We can also switch between consecutive tabs with ctrl + page up / page down (by default, this command isn’t defined on macOS).

Note that this will only work when VSC has access to the whole folder, and only when you are working with an open folder — not individual files. 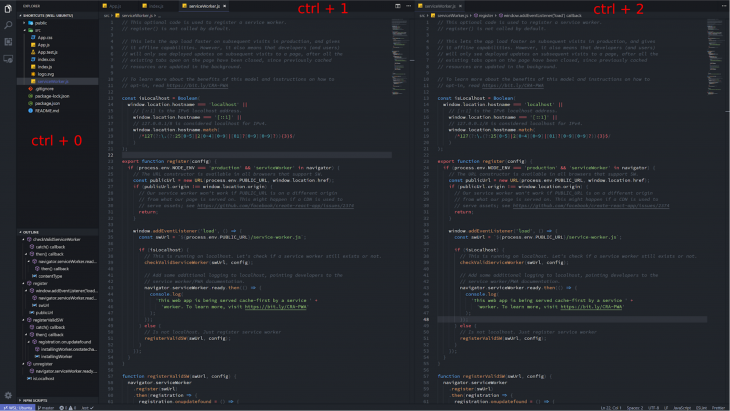 There’s also a slightly different approach to selecting files that are farther in the list from the one currently open. We can use ctrl + p (⌘ + p), which opens up a search bar where we type in either a filename (http.service.ts) or a full path (src/services/http.service.ts).

We often don’t work with all the files in the project at once; we simultaneously work with two, maybe three at most. To shorten the time it takes to switch between them (if we don’t have enough screen space to split the editor), we can use the file history.

File history, as the name implies, saves the files we last used and provides a quick way to restore them. In VSC we use ctrl + tab to switch between the last opened files.

While this is indeed very efficient, there is yet another way which, one might argue, is even faster. By using alt + left / right arrows (ctrl + shift + - / ctrl + -) we can switch directly to the previous/next file in the file history.

Now that we know how to navigate the files, let’s focus on the way we move around the code.

Making use of an outline

In the explorer panel, you can click the Outline section to have a code’s outline displayed. While the feature itself is amazing in that it lets us see a more general view of the code, we can also use it to quickly move around.

By using ctrl + shift + o (⌘ + shift + o), we can bring up the command palette, where we can choose the part of the outline we would like to jump to. After choosing the definition with an up/down arrow, the appropriate piece of code is highlighted for us, making it easier to get where we want to go. 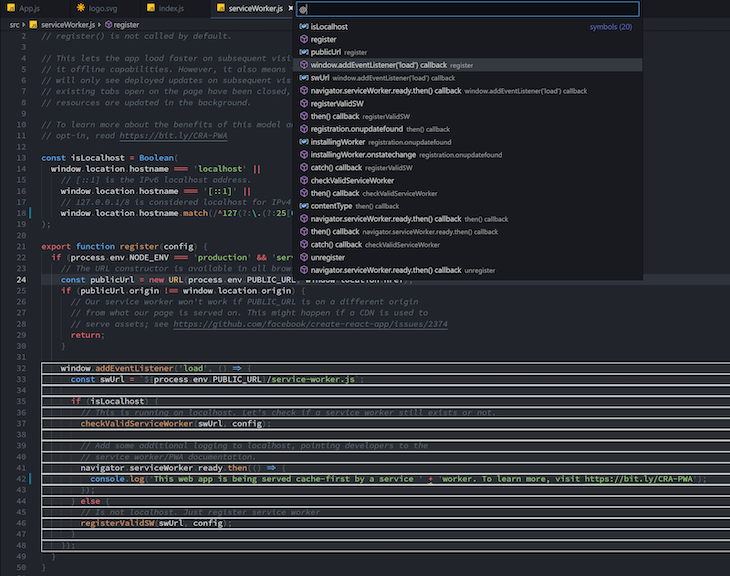 The same feature could also be used to search the whole project for a given piece of code. By using ctrl + t (⌘ + t), we again bring up the command palette, where we can now type the name of a variable/function/etc. to search for.

Straight to a given line

Imagine we want to jump straight to a specific line — for example, when there’s an error pointing to it. To jump to a line with a specified index, we can use ctrl + g.

Often we want to fix something quickly in one place of the code and jump right back to where we were before. This we do using ctrl + u (⌘ + u), which takes the cursor back to where it was prior to the jump.

Beginning and end of a file

Have you ever searched for a definition by hand or by ctrl + shift + f (⌘ + shift + f)? If you have, then you know how annoying that can be. VSC has a great shortcut for that!

Jumping to the definition

We can jump to the definition of a function or a variable currently highlighted using F12.

Peeking at the implementation 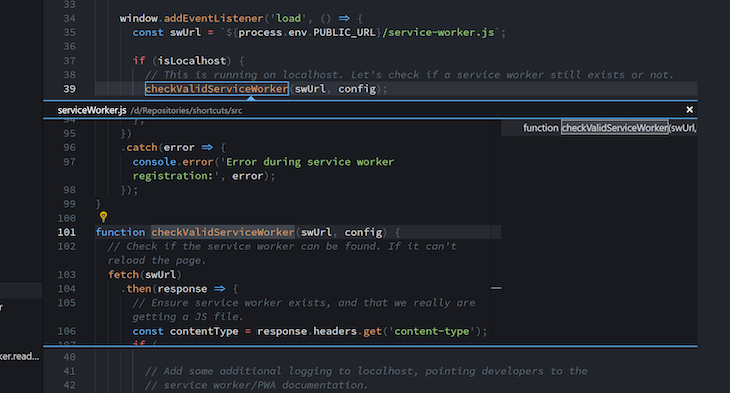 There’s also a shortcut for peeking at references of a symbol in a similar manner — right next to the cursor. We do this with shift + F12 (⌘ + k and F12). 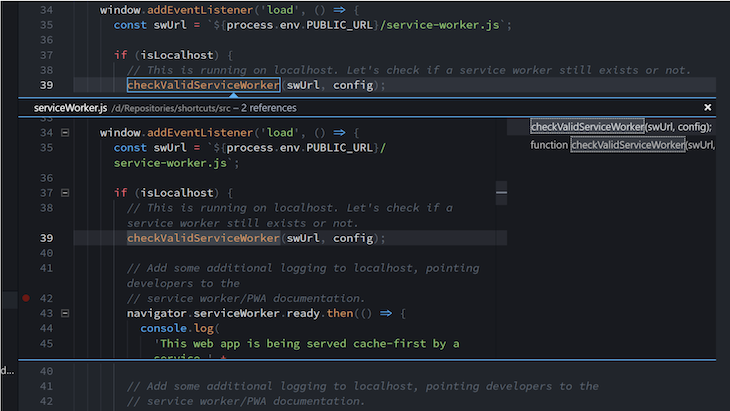 In both cases, we can use the up and down arrows to choose the definition we would like to see or jump to.

Changing the name of a symbol

Changing the name of a given symbol (e.g., the name of a function) throughout the whole project can be tedious. It is usually done with ctrl + shift + f (⌘ + shift + f) — we manually replace each usage of the symbol.

This can be done faster with the F2 shortcut. It prompts a window where we type the new name of a currently highlighted symbol, and that’s it — every occurrence has now been replaced with the new name.

Taking a closer look at errors

When there’s something wrong with our code, VSC underlines it with a red line. Usually, we could just hover over the code with the mouse cursor and see what’s wrong. We can, however, do it much faster by using F8.

We can leave the “error mode” by clicking the esc key.

As was the case with the errors, when we hover over a symbol, VSC shows us its simplified definition. To achieve the same result with the keyboard, we have to set up our own shortcut.

Then search for the Show hover action:

And set it to your preferred shortcut. I have chosen alt + shift + s.

The shortcut in action:

Sometimes VSC is able to fix our problems by, for example, importing the code we forgot to import ourselves or removing unused code. To see the available actions for the currently highlighted code, we can use ctrl + . (⌘ + .).

Code is made of blocks, be it a body of a function or an if block. Sometimes we want to select the whole thing and, say, remove it without worrying about where the block begins and ends. 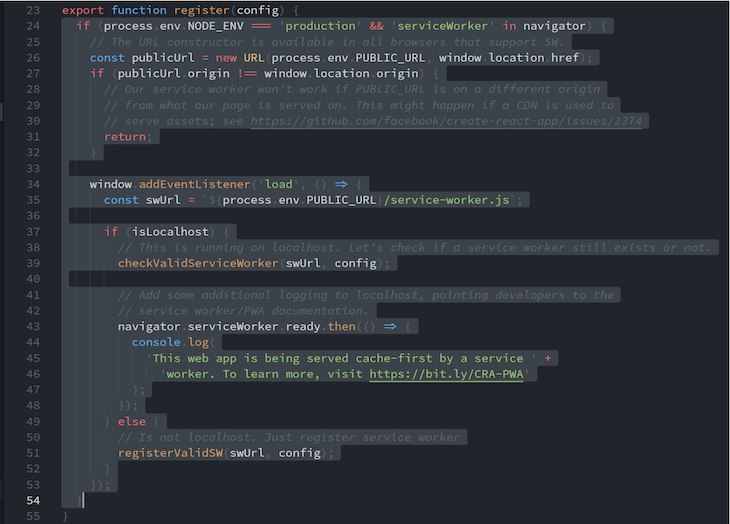 With Visual Studio Code opened in the full-screen mode, it is often convenient to have a terminal right there with us. Switching between the terminal and code calls for a few shortcuts of its own.

Terminal, just like the editor, can be split up into panels. For this we use ctrl + shift + 5.

To focus on a terminal, while in the editor, we use ctrl + `. If we use ctrl + ` while the terminal is focused, we can toggle its state from shown to hidden.

Once we are focused on the terminal, we can use alt + left/right (⌘ + option + left / right) to switch focus between split panels.

Here are some terminal shortcuts I found to be very helpful.

Killing a terminal can be achieved by clicking the trash icon in the top-right corner of the terminal, but in order for it to be a mouse-free experience, we have to set up a shortcut.

While in the shortcuts settings input, type in “workbench.action.terminal.kill” and then click on it to set up the shortcut. I have chosen to use ctrl + shift + x, but whatever works for you is fine.

Sometimes, when there’s a lot of logs coming in, we would like to temporarily make the terminal larger. Same spiel as before, but in the settings, type workbench.action.toggleMaximizedPanel. Here, I have chosen to put it under ctrl + shift + q. 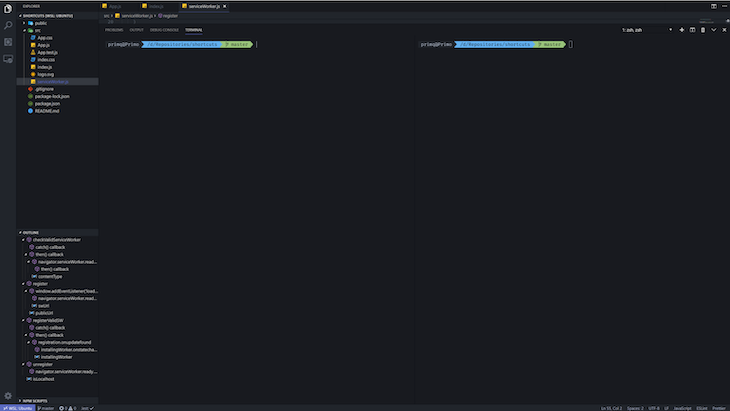 In case you don’t know what the shortcut is for something, you can always open up the command palette with ctrl + shift + p (⌘ + shift + p) and type in what you want the shortcut to do, e.g., “open terminal.” Most of the time, it will show you the correct action with the shortcut next to the name.

The key to mastering these shortcuts is consistency. Try to implement them gradually, and before you know it, you’ll find yourself relying less and less on the mouse, which in turn will make your coding experience much smoother and more efficient.

Have some killer shortcuts that I forgot? Share them down below!

Maciej Cieślar Follow A JavaScript developer and a blogger at mcieslar.com.
« Building a carousel component in React using Hooks
The history and legacy of jQuery »