Intro to Postgres + GraphQL with PostGraphile 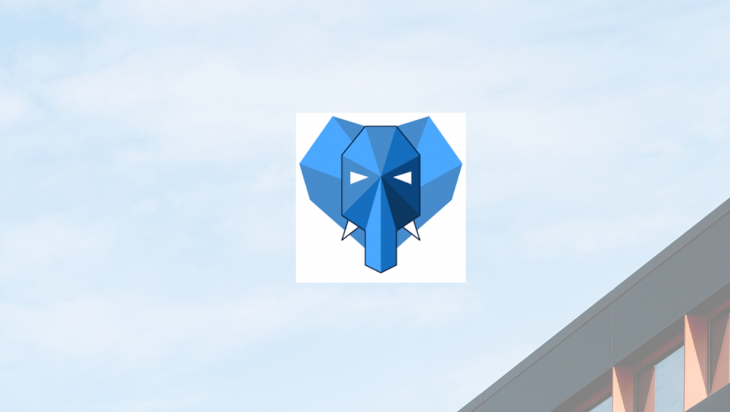 GraphQL is a fantastic solution for communicating with server-side data, it allows developers to create fast and reliable API’s that solve the problem of over-fetching and under-fetching of data by allowing those interacting with the server to specify the precise structure of the data needed from the server. This means both a better developer experience for those building applications consuming GraphQL APIs and faster applications for the end user.

PostGraphile, previously known as PostGraphQL, does a great job at pairing these two technologies to allow developers to quickly put together a full-featured GraphQL server storing data on a PostgreSQL database. PostGraphile harnesses Database-Driven Development to generate and update your Graphql server from your Postgres database schema, automatically detecting changes you make to your schema and updating your server accordingly.

In their own words:

PostgreSQL already has amazing authorization and relationship infrastructure, why duplicate that logic in a custom API?

PostGraphile handles the creation of a performant and standards-compliant GraphQL API layer allowing the developer to focus on the product. This also significantly cuts down on development time.

PostGraphile also boasts a powerful plugin system with several community developed plugins that can help expand on its functionality in a variety of ways.

In this article, we’ll take a look at how you can get a full-featured server up and running in minutes with PostGraphile.

PostGraphile can be used in three main ways:

In order to use PostGraphile, you need to have Node.js v8.6 or higher installed, you can find that on the Node website if you don’t have it set up yet.

You also need PostgreSQL v9.6.0 or higher which can be found on the PostgreSQL download page.

Once you have these two installed, you need to create your database. First, ensure Postgres is running. To do this run the following command in the terminal:

If you encounter the error below, that probably means Postgres is not running yet:

To fix this, start up. For mac users with homebrew, run:

Once Postgres is running, create a database for your application by running:

This creates a database called “testdb” which we will be using to create our sample API. You can now run psql with the database name or URL to access it and run SQL queries on it, for us this will look something like this:

PostGraphile can be easily installed globally with npm by running this command:

Now that you have Postgraphile installed, you can view the CLI flags by running:

To run PostGraphile, you’ll use the same URL that you used for psql with the database name added:

Where -c is the connection string (defaults to postgres:///), -s is the schema name (defaults to “public”), -a enables relay support and -j enables dynamic JSON.

The first endpoint is for your application to talk to and the second endpoint can be opened in a web browser to give you access to your database through GraphiQL (a visual GraphQL explorer).

Great! Now we have PostGraphile set up, we can get into defining the structure of our database which will, in turn, allow PostGraphile to update our API.

As described in the postgres documentation, a database contains one or more named schemas or namespaces, which contain the tables in which we store our data. Schemas also contain other kinds of named objects, including data types, functions, and operators. The same object name can be used in different schemas without conflict. For example, both schema1 and myschema can contain tables named mytable. Unlike databases, schemas are not rigidly separated. A user can access objects in any of the schemas in the database they are connected to if they have privileges to do so.

The default schema that is created alongside a database is public, most users only deal with this one. In PostGraphile, it is advisable to use schemas to help organize your application – you can use one schema for the tables that will be exposed to GraphQL, another for the tables that should be completely private (e.g. where you store the hashed user passwords), and you can use other schemas too depending on what makes sense for your application.

An example of schemas provided on the Postgraphile docs can be the following:

For our application, we’ll keep it simple and just create our own schema which we’ll call test_schema by running this command from the Postgres CLI:

A schema can contain several tables, for our example, let us create two tables in test_schema one containing authors and another containing the posts made by these authors. We will do this by giving it the structure of each of the tables.

The authors table will have an id that acts as a primary key, a username that uniquely identifies them as well as a first name, last name, and bio.

The posts table on the other hand, will have an id that is the primary key, a headline field that is its title, and a body as well as created_at. There’s one more field, this is author_id which references the authors table by creating a foreign key linking to it, this creates a one-to-many relationship where one author can have several posts:

Let’s verify that the data has been entered into the database as expected:

The result should show two entries created as shown below.

You can query the above data on GraphiQL (a visual explorer for GraphQL provided by the server) with the query shown below and it should return the data as expected. This can be done by sending the query declared below to the server on http://localhost:5000/graphiql to return certain details saved.

You may have noticed, that some variables declared using snake_case in Postgres have been converted to camelCase in the GraphQL API, which is the standard for such APIs. This is down to PostGraphile applying the concept of inflection to map things onto more natural names while avoiding conflicts. It also helps name target types and referencing columns such as postsByAuthorId. 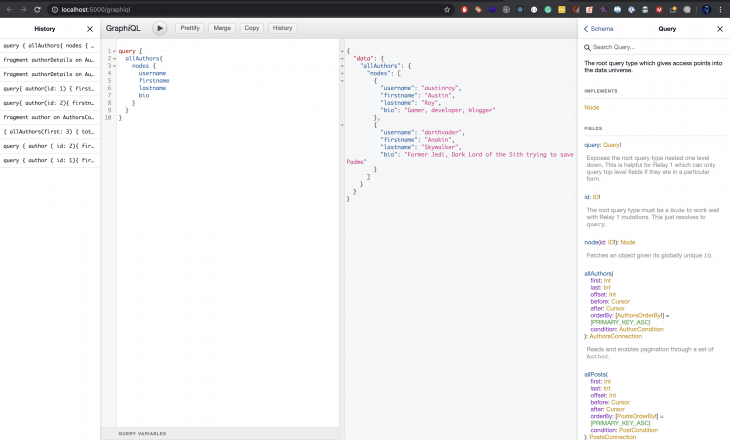 And just like that we have a whole GraphQL server up and running on a Postgres DB. To utilize our server let’s use GraphiQL to create our first post. We will do this by executing the createPost Mutation that PostGraphile generated for us.

This utilizes the input provided to create a new post and returns selected fields from the post. I chose to return the post headline, body, and time created, leaving out the ID. You can choose which values you’d like returned by including them in the mutation.

You are probably wondering where the input is being passed to the mutation above. We will declare them separately in the QUERY VARIABLES section which is currently hidden. To bring it up, just click on the QUERY VARIABLES panel at the bottom of your screen and pass the following code into it:

The object with the variables being passed as input should be declared in JSON format without any trailing comma so as to avoid having it invalidated by GraphiQL which caries out its own checks.

Here’s what it will look like in your browser. 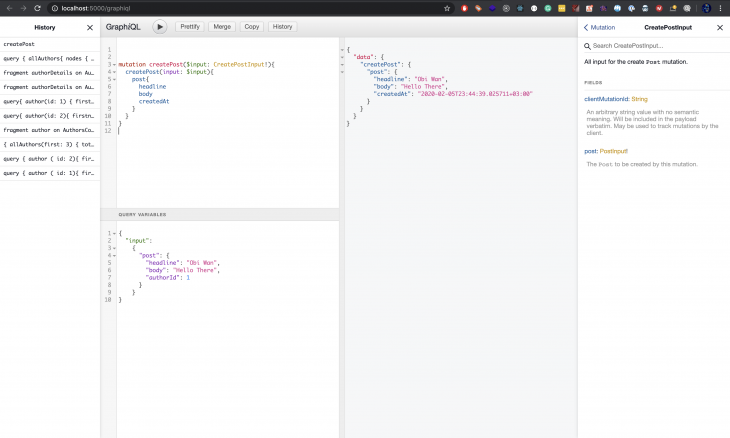 These are just two of several Queries and Mutations that PostGraphile has generated for us just from the database schema we provided. These include:

On top of handling most of the CRUD functionality you may need, PostGraphile also documents the usage of most of these GraphQL Types (Queries and Mutations), making the API generated extremely easy to consume for anyone looking to make use of it.

You may have noticed the data types, i.e. author and post are yet to be documented. This can quickly be fixed by making use of smart comments. To show this let us add some documentation explaining our authors table.

To add a comment to our authors table run this command in Postgres:

When you check the Author Type in GraphiQL, it changed from “No Description” to “Author on the platform” as seen in this screenshot.

PostGraphile is a powerful tool that can help developers quickly and very easily set up fully featured and robust GraphQL APIs running on PostgreSQL databases. This allows them to build fast and reliable APIs running on a secure and stable database with several powerful features. It is also an incredibly easy tool to use and can greatly speed up development time on these APIs allowing the developers to focus on solving the problem rather than setting up the application. This article only covers a subset of the many capabilities PostGraphile has to offer and you can learn more about them by checking out the complete documentation.

3 Replies to “Intro to Postgres + GraphQL with PostGraphile”