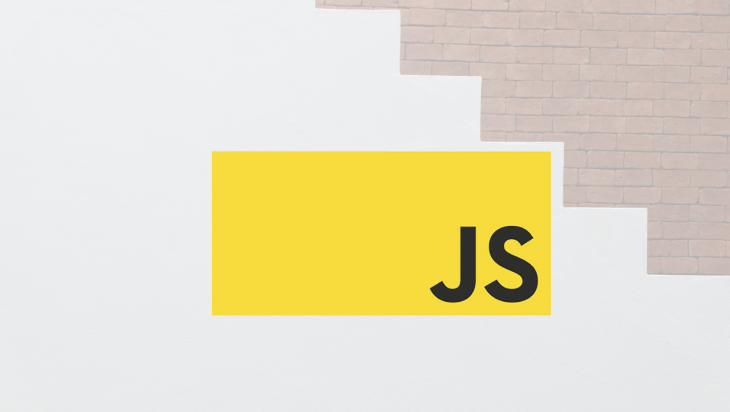 TL;DR: In this post, we will look at prototypes and how to use them for inheritance in JavaScript. We will also see how the prototypical approach is different from class-based inheritance.

Inheritance, a prominent feature of a programming language, emerged with the introduction of object-oriented programming languages. Most of these languages were class-based languages. Here, class is like a plan or blueprint and objects are its manifestation. Meaning, in order to create an object, first we have to create a class. Then we can create any number of objects from one class.

Imagine, we have a class that represents a smartphone. This class has features like capturing images, GPS, etc, like any other smartphone. Here’s an example of how to create such a class and an object in C++ : 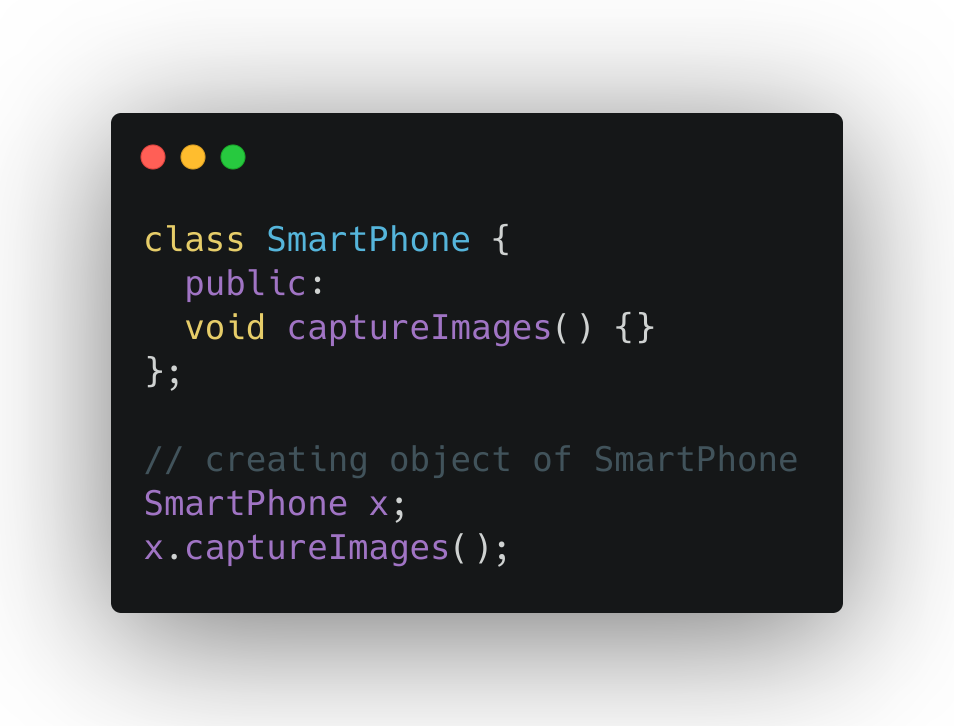 We created a class named SmartPhone and it has a method named capturePictures, to capture images.

Let’s imagine, we need an iPhone class, that would capture images along with some special features like a face ID scan. Here are two possible solutions: 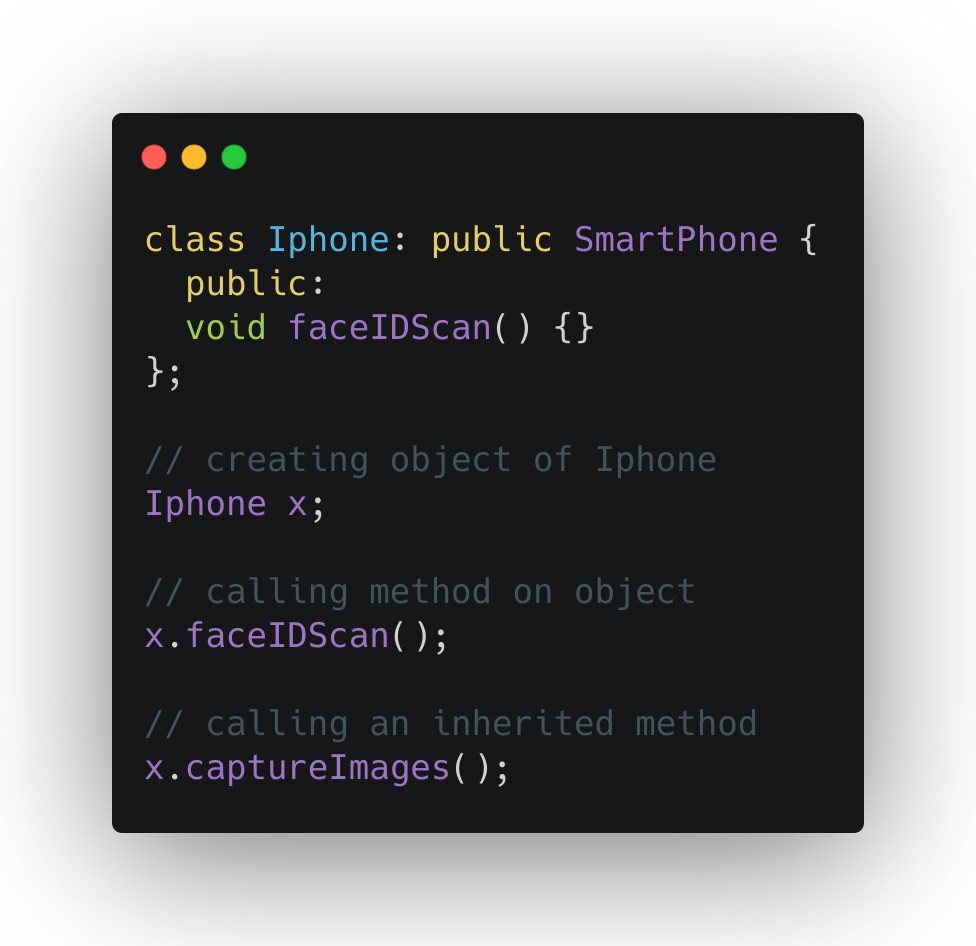 Above is a trivial example of inheritance. However, it shows that inheritance allows us to reuse code in a way that the resulting program is less error-prone and takes less time to develop.

Here are some important things to know about classes :

It’s worth to note that, class in itself is not doing anything. Until you create an object from a class, no work is actually done. We will see why it’s different from JavaScript.

What is a prototype?

In JavaScript, all objects have a special internal property which is basically a reference to another object. This reference depends upon how the object is created. In ECMAScript/JavaScript specification, it is denoted as [[Prototype]].

Since [[Prototype]] is linked to an object, that object has its own [[Prototype]] reference. This is how a chain is built (it’s known as the prototype chain).

This chain of [[Prototype]] is the building-block of inheritance in JavaScript.

To access the object’s [[Prototype]], most of the browsers provide a __proto__ property.

It’s important to note that, this property is not a part of the ECMAScript standard. It is a de-facto implementation by the browsers.

Get and set prototype methods

Apart from the __proto__ property, there is a standard way to access the [[Prototype]].

Here is how we can access the [[Prototype]] of an object:

There is a similar method to set the [[Prototype]] of an object. This is how we do it:

We have now discussed [[Prototype]]. It’s nothing but a standard notation to designate the prototype of an object. Many developers get it confused with .prototype property, which is an entirely different thing.

In JavaScript, there are many ways of creating an object. One way is using a constructor function, by calling it using the new keyword like this: 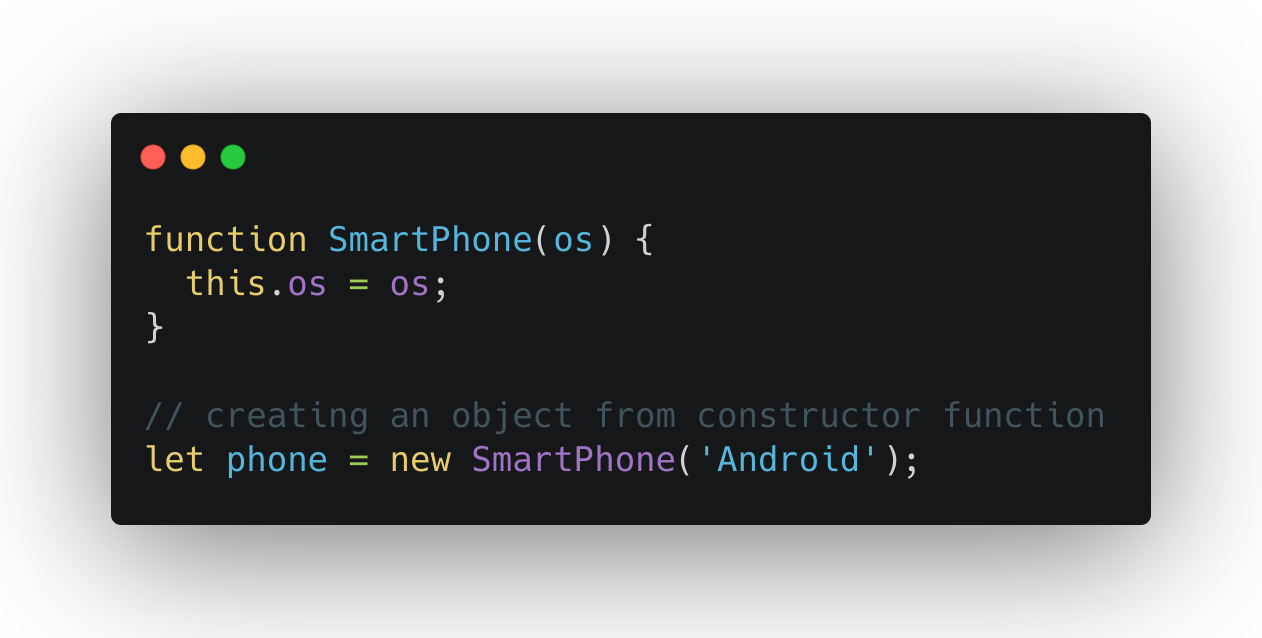 When you console.log the phone object, you will see an object with __proto__ property, like this: 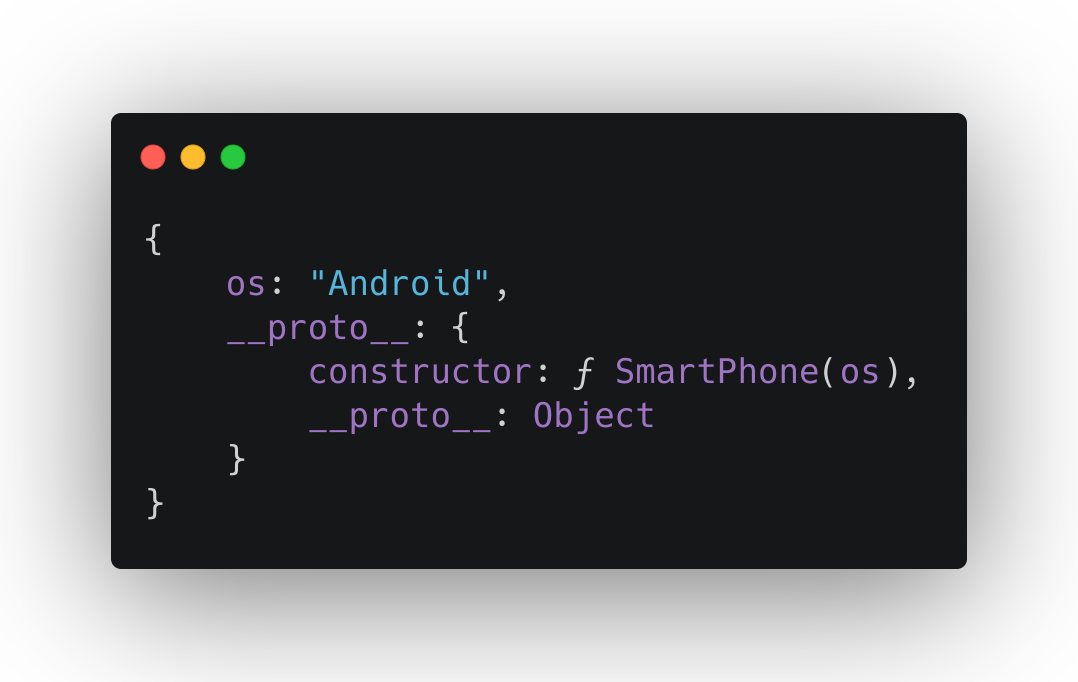 Now, if we want to have some methods on the phone object, we can use .prototype property on the function, as follows:

When we create the phone object again, we would see the following in the console.log: 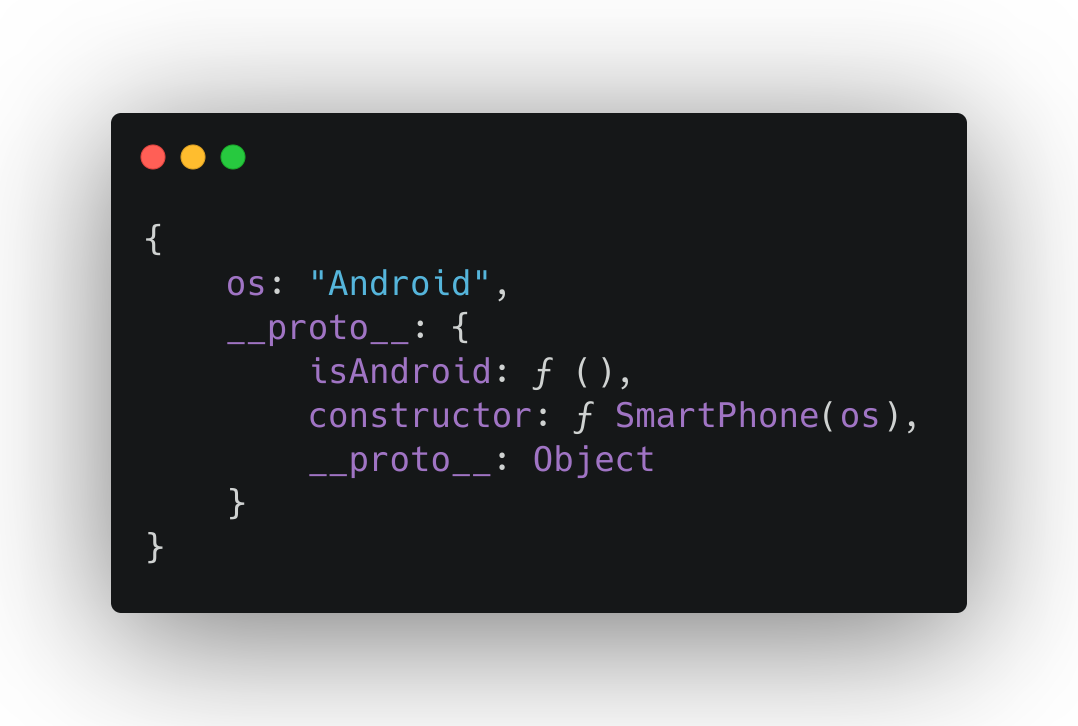 We can see the isAndroid() method in the object’s [[Prototype]].

As a matter of fact, if you compare the SmartPhone.prototype to the phone’s [[Prototype]], you will see that they are the same:

It’s worth noting that, we can also create methods inside the constructor function. Instead, we did it using the function’s prototype. There’s a good reason to do so.

Let’s take a look at the following example: 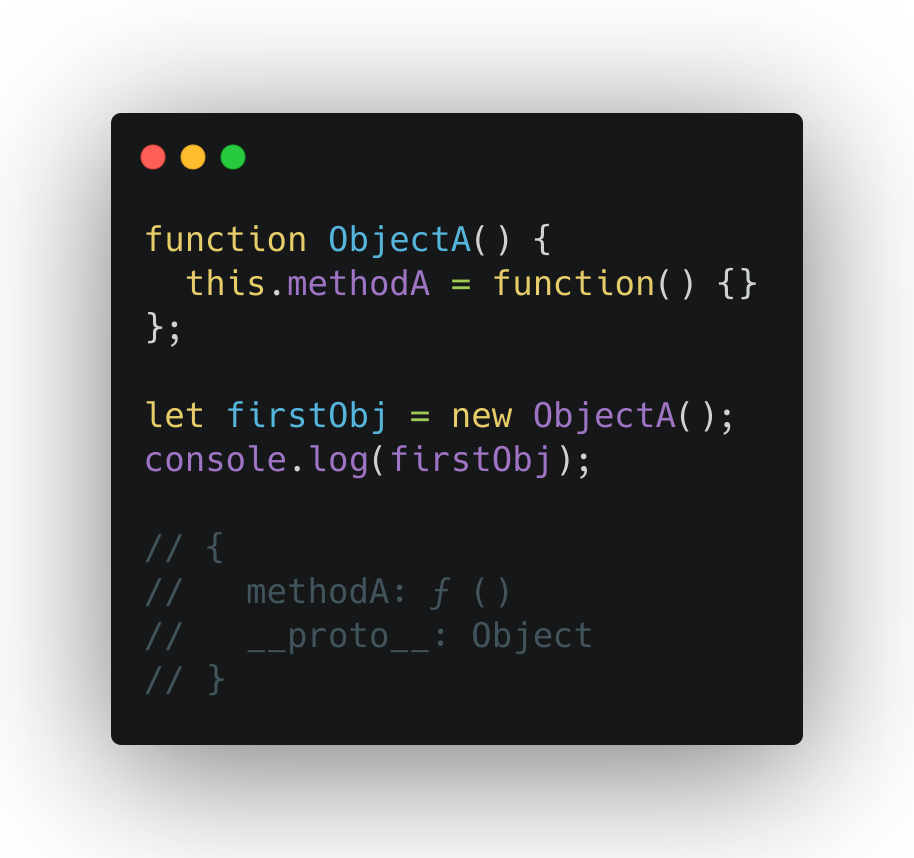 The problem with this approach is when we initiate a new object. All the instances get their own copy of methodA. On the contrary, when we create it on function’s prototype, all instances of the object share just one copy of the method. Which is more efficient.

When we access a property either to get it, the following happens:

When we set/create a property, JavaScript always set it on the object itself. Even if the same property exists on the [[Prototype]] chain. Here is an example:

It’s also worth noting that the end of a normal object’s [[Prototype]] chain is built-in Object.prototype. That’s the reason why most of the object shares many methods like toString(). Because they are actually defined on Object.prototype.

In JavaScript, there is just prototypical inheritance. No matter how we create an object. But still, there are subtle differences, that we should take a look at.

The easiest way to create an object in JavaScript is by using an object literal. This is how we do it:

If we log the obj in the browser’s console, we will see the following: 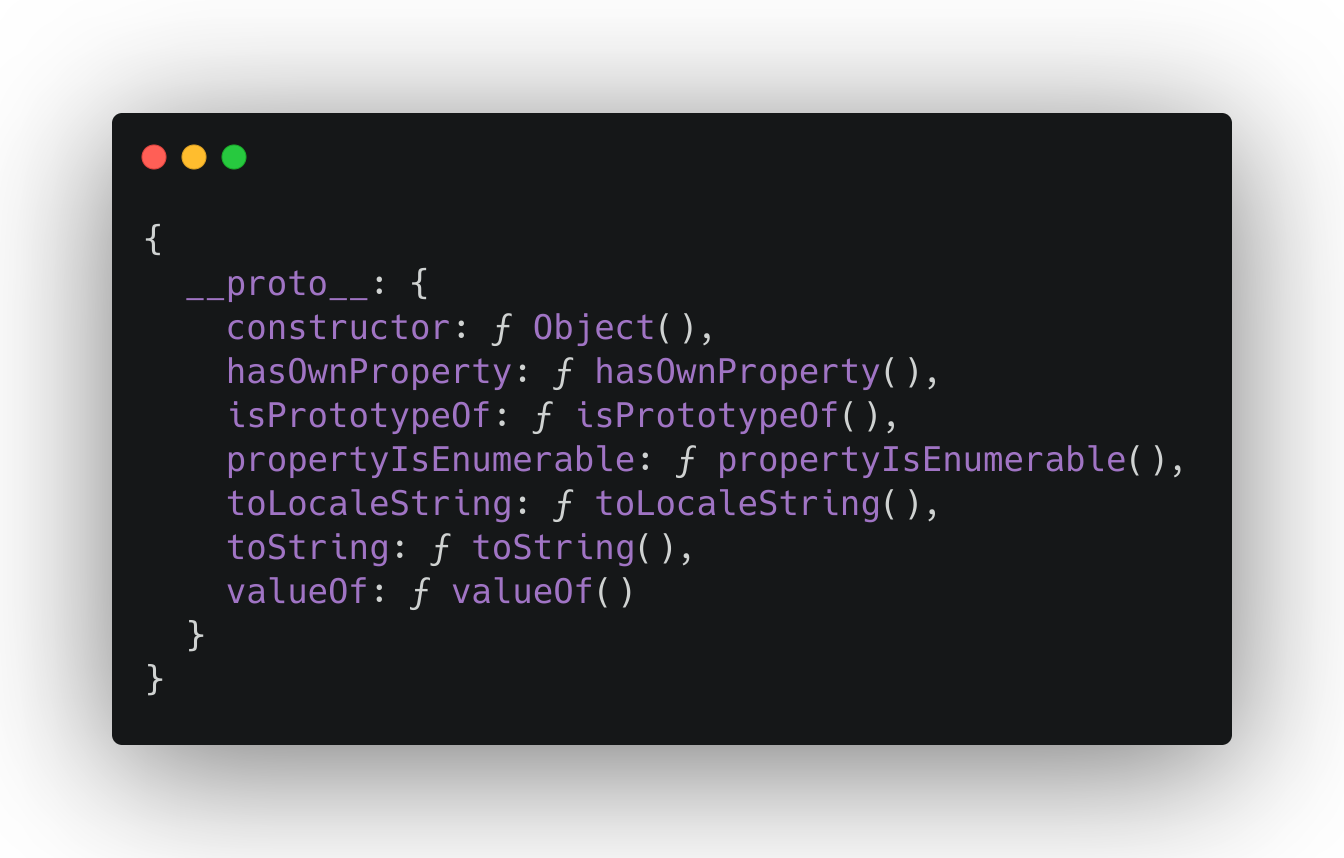 So basically, all the objects created with literal notation inherit properties from Object.prototype.

Here’s how we use it:

This approach results in the same object as object literal notation. It inherits properties from Object.prototype. Since we use Object as a constructor function.

With this helper method, we can create an object with another object as it’s [[Prototype]] like this: 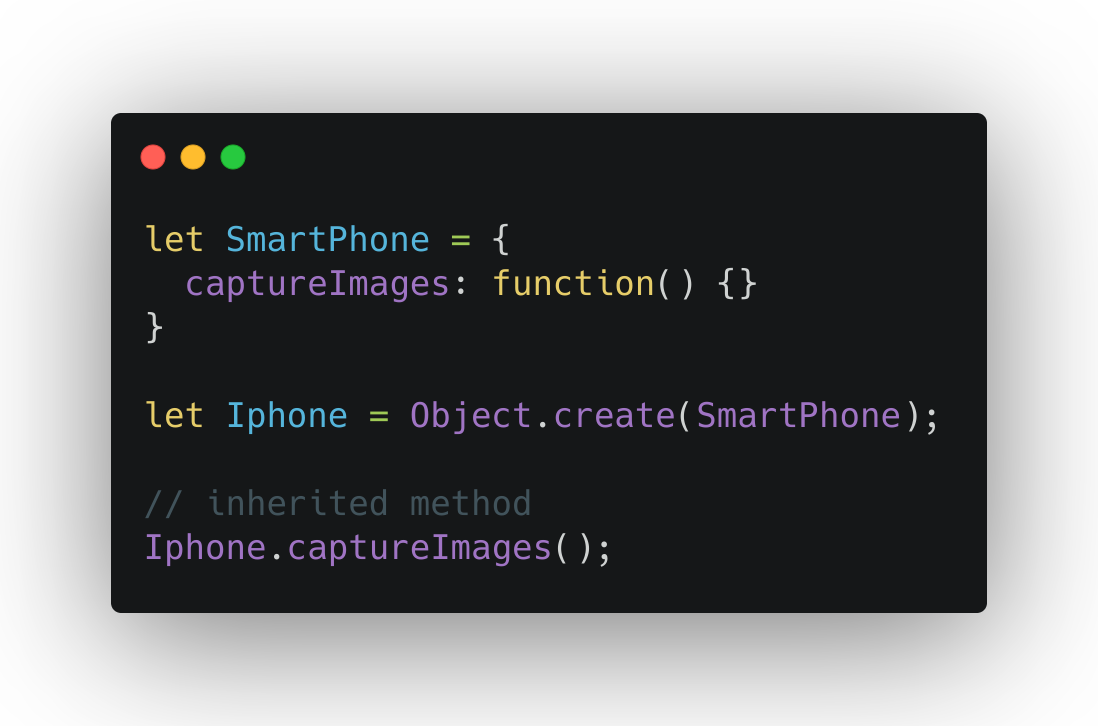 This is one of the simplest ways to use inheritance in JavaScript.

Any guess how we can make an object without any [[Prototype]] reference?

Similar to how we have the object constructor function provided by JavaScript runtime. We can also create our own constructor, to create an object which suits our needs as we can see here:

Now, we want to create an iPhone class, which should have 'iOS' as it’s OS. It should also have the faceIDScan method.

This will set the this.os property to 'iOS' in the Iphone constructor function.

The reason why we called SmartPhone.call method is because we need to change the value of this to refer to Iphone. It would be similar to calling the parent’s constructor in an object-oriented world.

The next thing is, we have to inherit methods from SmartPhone constructor. We can use our Object.create friend here, as follows:

Now we can add methods for Iphone, using .prototype as follows:

Finally, we can create an object using Iphone as follows:

With the ES6, this whole ordeal is very simple. We can create classes (they are not the same as classes in C++ or other any class-based language, just a syntactical sugar on top of prototypical inheritance) and derive new classes from other classes.

Here is how we create a class in ES6:

Now we can create a new class which is derived from SmartPhone, like this :

Instead of calling SmartPhone.call, we are calling super.call. But internally, the JavaScript engine is doing this for us automatically.

Finally, we can create an object using Iphone as follows:

This ES6 example is the same as the previous constructor method example. But it’s much cleaner to read and understand.

Let’s summarize what we have learned so far:

I hope this blog post was useful. To learn more about inheritance in JavaScript take a look at the article on MDN.

Indermohan Singh Follow JavaScript developer interested in Angular, RxJS, and Ionic framework.
« Exploring Netlify Split Testing
How to execute a function with a web worker on a different thread in Angular »