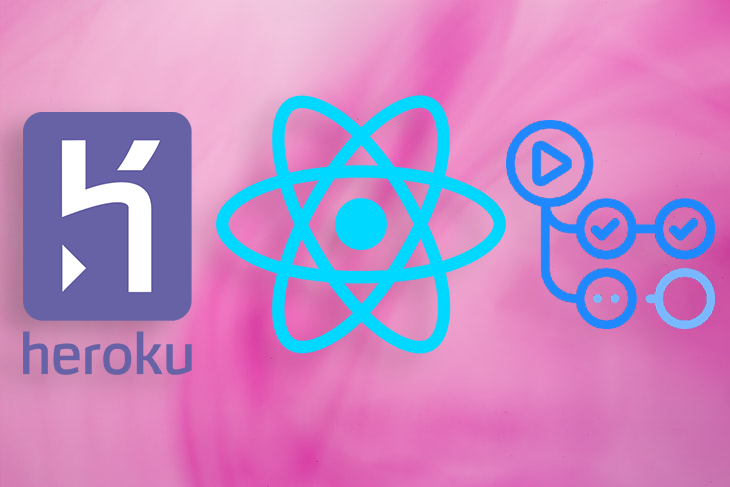 The technology industry innovates quickly, requiring developers to deliver products and services at a rapid speed while still prioritizing high quality. Integration and delivery used to be a manual process, but automation makes it much faster and more reliable.

In this article, we’ll explore continuous integration and continuous delivery or deployment. CI/CD automates the delivery of our products and features, making it faster and helping us maintain high quality. There are several tools available to set up CI/CD pipelines, however, in this article, we’ll set up GitHub Actions with Heroku as our cloud hosting service and GitHub to host our repository.

In this tutorial, we’ll use the following tools: Git, GitHub, GitHub Actions, Heroku, React, Draw.io, and Swimlanes.io. You can access the repository for this project on my GitHub profile. Let’s get started!

CI/CD has three important terminologies that we need to understand before jumping into the code.

Continuous integration is an automation process for engineers and developers that allows us to test new features in our code, making sure they work as expected.

Continuous delivery comes next, ensuring that the new changes are well-tested, free of bugs, and ready to be deployed to the production environment.

In the continuous deployment stage, changes to the application are deployed to production by merging to a specific branch, like master.

The sample diagram below fully details the CI/CD process:

Let’s set up the CI/CD strategy for our example application. We’ll have one GitHub repository with two branches, master and develop. We’ll make a new feature branch from the develop branch, where we’ll develop a new feature and push those changes to its own feature. Then, we’ll create a pull request against the develop branch on GitHub.

We’ll also have two CI/CD yml files for configuration, development and production. The development file is set up to trigger the CI/CD pipeline and deploy our changes to the Heroku development environment when we successfully merge a pull request into the develop branch.

The production.yml file is set up to trigger a CI/CD pipeline for the production environment on Heroku when we pull the latest changes from the develop branch, merge develop into master, and finally push those changes to the remote master branch.

The diagram below fully details this strategy:

First and foremost, we have to set up a simple React project. Run the command below to create a React project in your projects folder:

The command above will generate a React project and install all the required dependencies. Below are some of the dependencies we’ll use and their current versions at the time of writing: 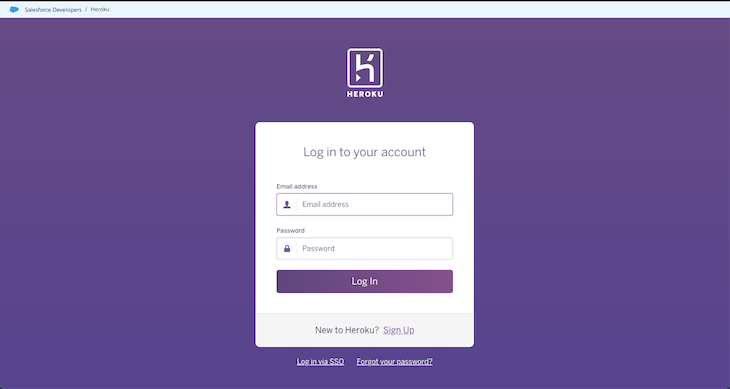 Then, click on Create new app from the dropdown menu. Go ahead and give your app a name. I’m calling mine github-actions-heroku-develop, as shown in the screenshot below.

Since I’ve already created a project with this name, it shows up as unavailable on my account. However, you should go ahead and click on Create app, and a development environment will be created for you: 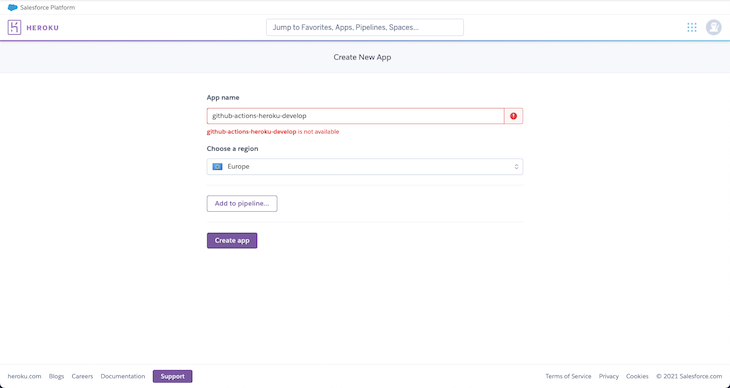 We’ll merge a pull request to the develop branch, then our app will be deployed to this environment.

Now, let’s repeat the same process to create a new app, which we’ll name github-actions-heroku-prod. When we merge the develop branch into master and push those changes to the remote master branch, those changes will be deployed to this environment.

With our Heroku environments set up, we should go ahead and click on our profile picture icon on the Heroku dashboard, then click Account settings, as shown in the screenshot below: 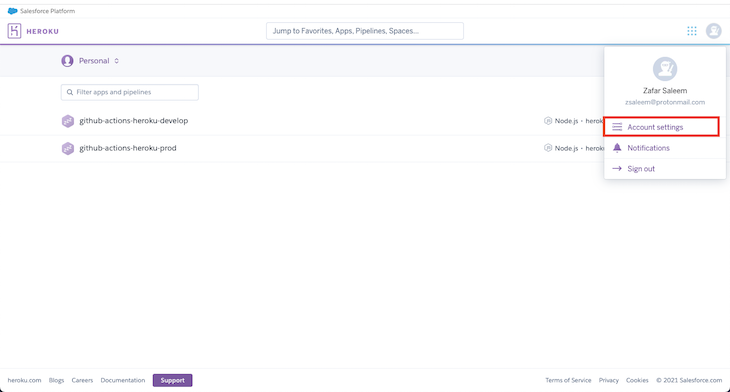 Scroll down to the API Key section to reveal the API Key. Copy and paste it somewhere safe because we’ll need it when we set up our GitHub repository: 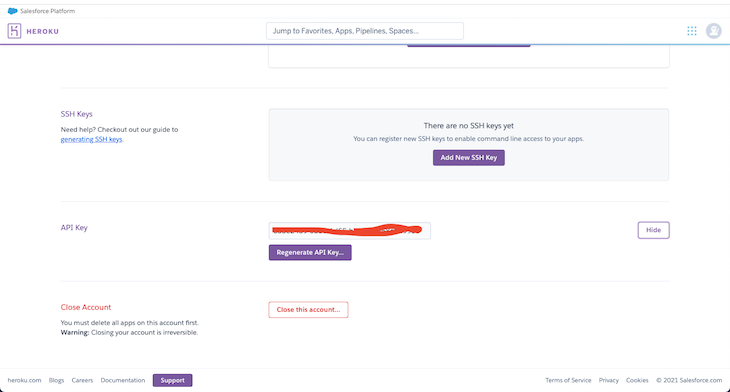 Now that we’re done with our Heroku setup, let’s move on and set up our GitHub repo.

Set up the GitHub repository 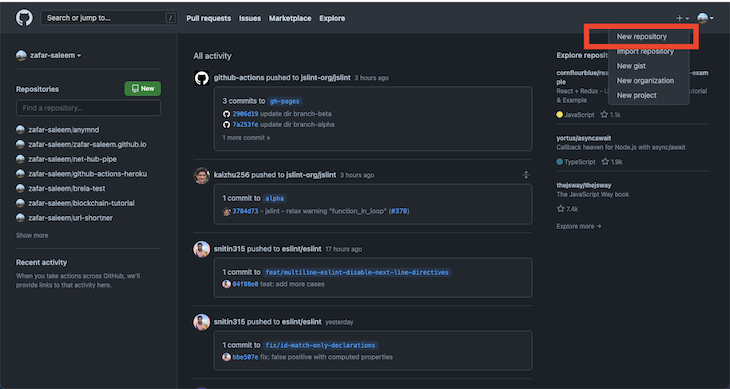 Fill out the form as follows: 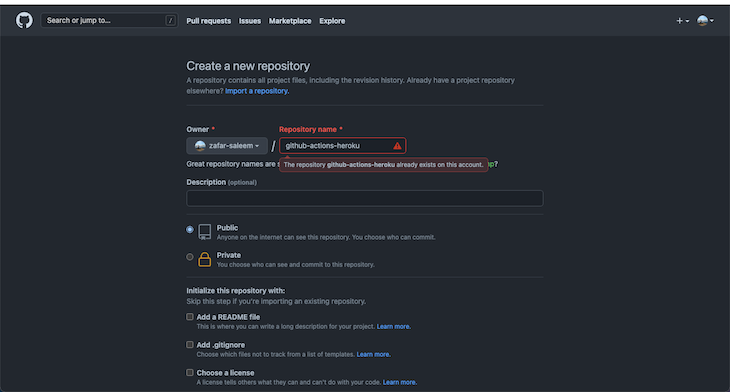 In the screenshot above, the project name github-actions-heroku is not available because I already built one with that name for this blog post. Therefore, I’ll use the one I already created. However, you should go ahead and create the project.

Once you create a project on GitHub, you’ll see a screen like the one below: 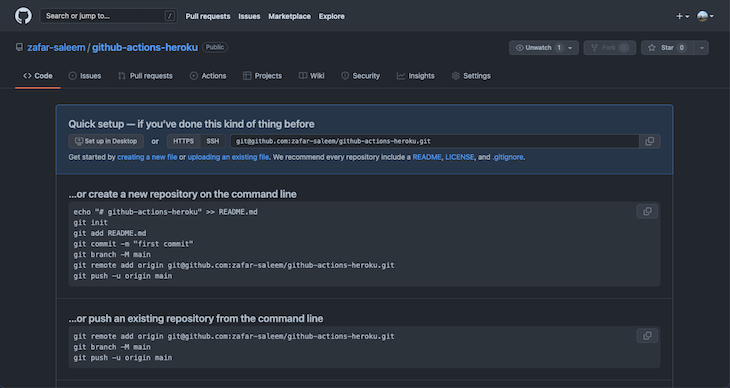 For now, you can leave this screen as is. We’ll return to this in a bit. Go back to your local environment terminal and cd into the local project you created earlier:

First, remove the .git folder from the project as follows:

Then, go ahead and initialize this repo as a Git project:

The command above will automatically create a master branch for you. Simply create a new branch called develop with the following command:

Now, go back to the masterbranch:

Add your GitHub repo to your local repo with the following command:

Now stage, commit, and push your changes to the remote master branch:

Next, we’ll check out the develop branch:

Now, let’s go back to our project on github-actions-heroku and click on Settings > Secrets > New repository secret, as shown in the screenshot below: 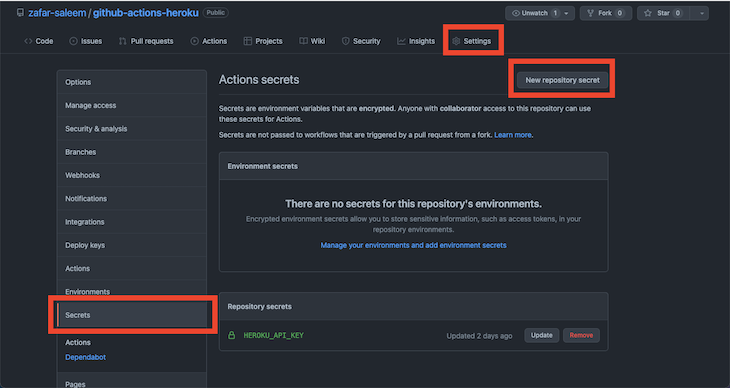 Once you click on New repository secret, you’ll be presented with the screen below: 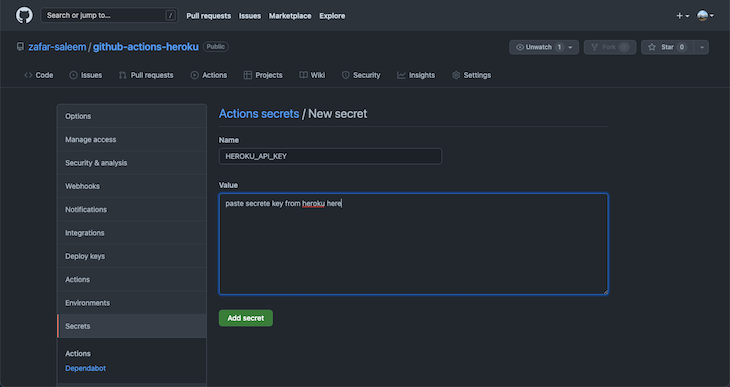 Name your secret accordingly, as shown above, and paste the Heroku API key you copied earlier. Then, click on Add secret. Now, we’re done with our GitHub and local repo.

Now, open github-actions-heroku in your favorite editor; I’m using Sublime Text. Create a folder at the root of the project named .github. Inside .github, create a new folder called workflows. Inside the workflows folder, create a file named development.yml and paste the code below in it:

At the top of this file is a development workflow. Whenever we push any changes or merge a pull request to the develop branch, the pipeline on line 6 will be triggered automatically. We’re using the latest ubuntu machine.

Now, we’re done with development.yml. Let’s create a new file inside the workflows folder called production.yml and paste the contents below into it:

The code above is for production and is triggered whenever we push new changes to the master repo.

To test if our workflow is working as expected, we’ll first make sure we’re on the develop branch in our local project:

On GitHub, create a pull request against the develop branch. Merge that pull request, and it should trigger the development pipeline in the Actions tab of your GitHub project. Let it finish, then follow the steps below:

To see the production pipeline triggered, go to your GitHub project and click on the Actions tab. Once both are successfully finished and deployed, you can go ahead to Heroku and test the latest changes that are deployed.

In this article, we covered CI/CD with React, GitHub actions, and Heroku. By automating integration and delivery, we can improve the speed and accuracy with which we deploy our applications to production. I hope you enjoyed this article. Happy coding!

Zafar Saleem Follow I've worked as a developer on projects spanning from small-scale websites to large-scale applications both in small and large companies.
« Bulma vs. Tailwind CSS: Which is the better Bootstrap alternative?
How to run a Rinkeby Indexer for the Graph network (for free) »