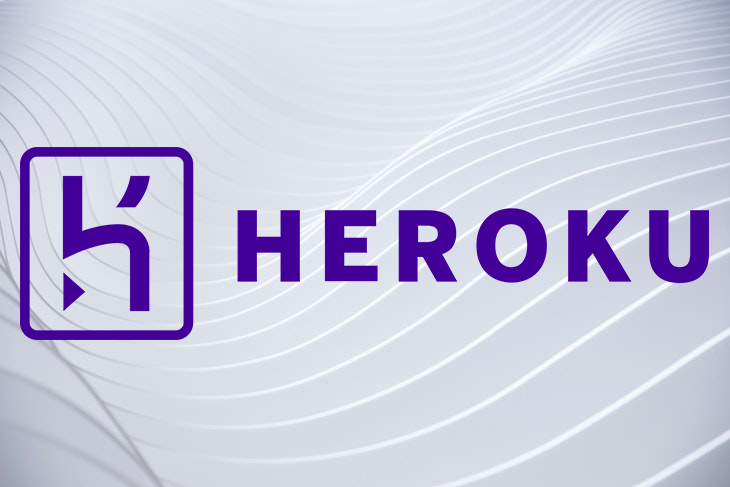 For years, Heroku’s free tier has been the standard by which many developers released prototypes, hobby projects, and portfolio pieces to the public.

We’ll build a simple, framework-free Node.js app, and then deploy it to three different services that offer a free tier, Render, Railway, and Fly.io. Let’s get started!

We’ll build a plain vanilla Node.js server, but the same principles would apply if you’re using any of the popular Node.js frameworks, like Express, Koa, Fastify, NestJS, FoalTS, and more. You should already have Node.js installed on your machine.

Open your editor to an empty folder. Create a new Node.js project from your terminal using the npm init -y command.

Create an index.js file called touch index.js. In package.json, let’s set up our start script with the command below:

Inside of index.js, run the following code to configure a basic “Hello, World!” Node.js server:

Let’s test this locally by running node start and then heading over to localhost:8080.

If you see “Hello, World!”, then it’s working, and we can begin deploying it. From your terminal, create a git repository called git init. Add all of your files to staging with the git add . command, then make a commit with git commit -m"First Commit".

Next, you’ll head over to GitHub.com, create a new repository, and get the URL. Add your GitHub.com repo as a remote to your local repo and be sure to use your URL:

Then, push your code up to remote git push origin main. You can confirm whether your branch is main or master with the command git branch.

Now that we have our code up on GitHub, we can proceed with deploying it. You can check out my repo from this exercise for reference.

From this screen, we wait for the deployment to complete, which can take a while. The URL for when it is done can be found in the upper left hand corner: 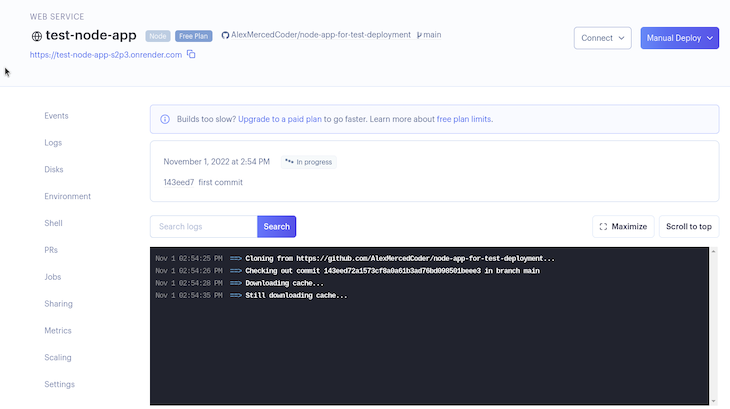 When it’s done, click on the URL they generated for you, and you should see our “Hello, World!” message. That was pretty easy, wasn’t it!

Render also offers other services that you may find useful as you build your application, like databases and cron jobs, which are scripts that run on a set schedule.

Similar to Render, Railway is a service that allows you to deploy your application and provision several types of databases, like Postgres, mySQL, and MongoDB. The steps to deploy our Node.js application on Railway will be very similar to those for Render:

It should complete pretty quickly, and you’ll see the following screen: 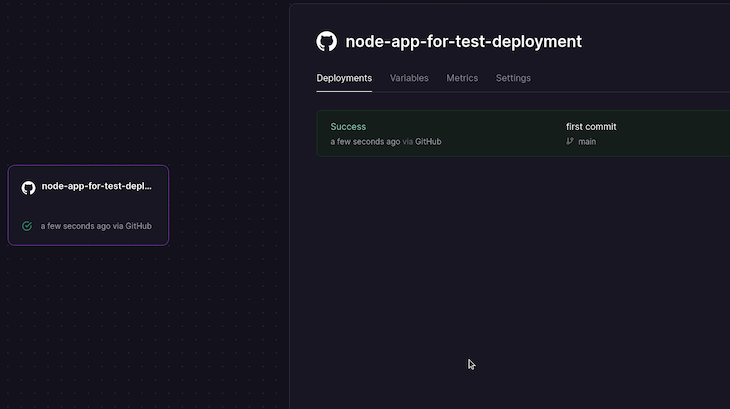 By default, it will not have a publicly accessible domain name. To generate one, head over to the Settings tab and click Generate Domain. This will create a URL that you can use to share your project with others. That’s it!

Fly.io focuses primarily on deploying Docker containers, and over the last few years, it has made the process much easier. First, sign up using your GitHub account. We’ll take a different approach when deploying with Fly.io:

It may take a while, but once it is deployed, you’ll see the application on your Fly.io dashboard as well as the URL it is located at.

If you need to update your app in the future, simply run the command flyctl deploy from the directory where your application is. It knows which deployment to update because when you ran flyctl launch, it created a fly.toml file with all the deployment settings for speeding up updates.

There are a growing number of services looking to fill this gap, but a different approach is to replace your backend needs with serverless functions, which also have a free tier on Vercel and Netflify. They are easy to use, but take some getting used to as we developers often think of our backend as one application instead of several serverless endpoints.

Yes, it is a little disruptive that we’ve lost Heroku’s free tier, but the resulting splintering across many different services like Render, Railway, and Fly.io will make the industry more resilient. With developers no longer beholden to one vendor, the competition for market share will accelerate the drive to innovation. I hope you enjoyed this article. Be sure to leave a comment if you have any questions, and let me know which service you prefer as an alternative to Heroku. Happy coding!

Alex Merced Follow I am a developer, educator, and founder of devNursery.com.
« Hey, product owners: Stop behaving as backlog owners!
Build a Kanban board with dnd kit and React »